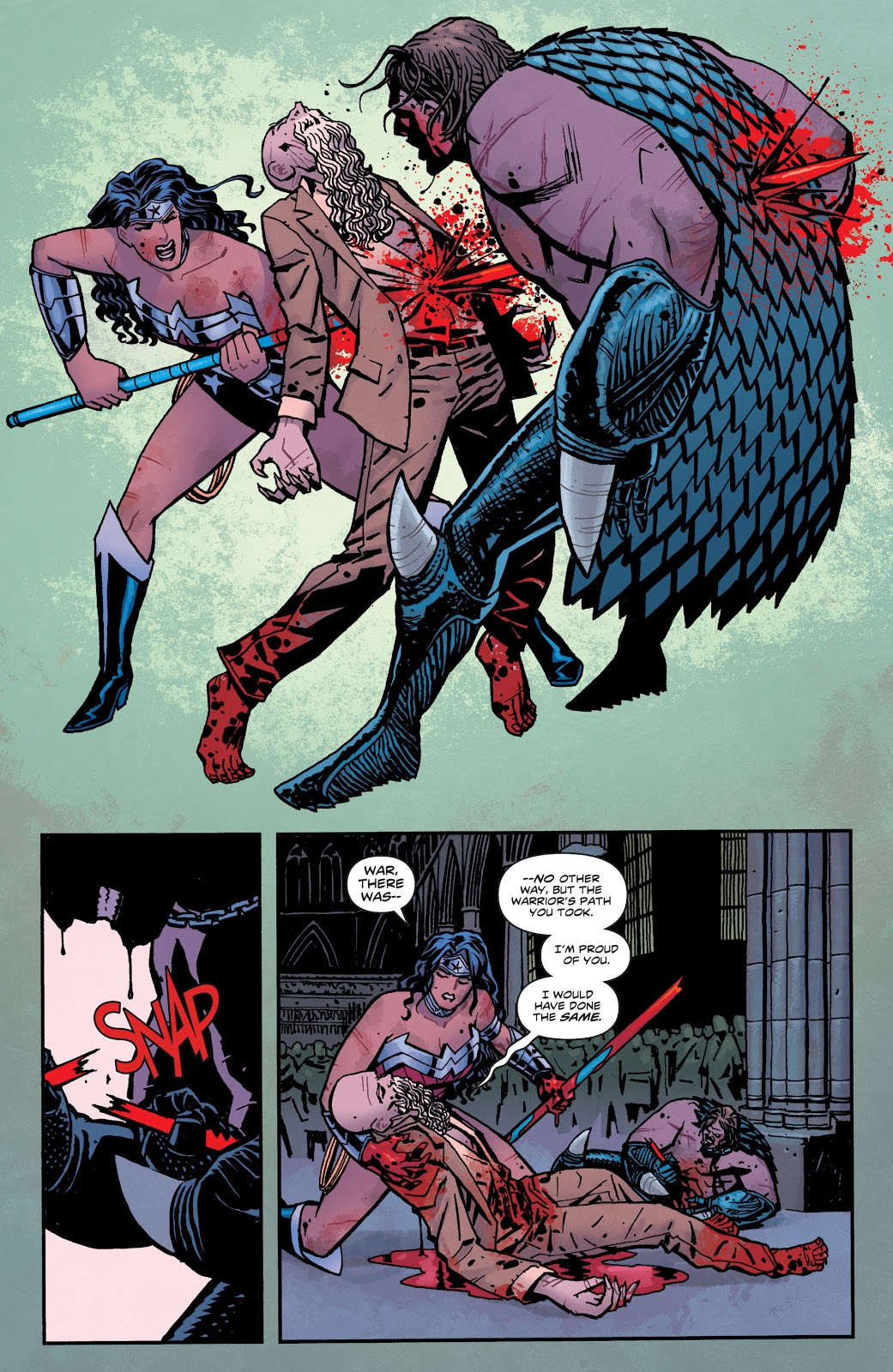 Angered at the prophecy, Zeus ordered the witch to kill First Born. Because of Hera’s desperation, First Born was spared. The witch left First Born in Africa where he was raised by hyenas. Cassandra indicates that 60 years ago in Turkey, the witch’s mummified body was found with his story tattooed across every inch of her body. It took that time to decipher it. Cassandra also says he knows the whereabouts of First Born’s armor and weapons. To this, First Born replies that he needs a sign for the one who has taken his birthright. As he finishes the sentence, the sun rises meaning that it is Apollo the the pragmatist and the coward.

On the way, Wonder Woman is held back by Hephaestus who does something mysterious to her Bracelets of Submission. There, Lennox finds Milan who holds a grudge against him and tells him to leave. When Lennox begrudges, Orion appears before him and tells him he is looking for the last of Zeus’ bastard children. He makes threats on Lennox which causes Wonder Woman to step out of the shadows. As she attacks Orion, her Bracelets draw out swords. Seeing that, Milan unleashes a swarm of flies out of his mouth to envelope them.

Suddenly, they are attacked by Hermes. Though Wonder Woman is the better fighter, Demeter is faster and nearly wounds her with his talon. At that moment, a Boom Tube appears and Orion transports Wonder Woman away on his Astro-Harness with Hermes in tow. At Wonder Woman’s injunction, the Astro-Harness stops in mid-air, causing Hermes to fall into Demeter’s Realm. In Demeter’s Realm, War confronts Demeter. War laments being bored by being held between life and death. He opens Demeter’s womb and removes the baby from her cavity.

Departing Demeter’s Realm, Orion consoles Wonder Woman. He tells her they will find the baby. Heading back to the hotel, Orion and Wonder Woman are surprised to see everyone. They come in and they see that Zola is with the baby. Zola says War brought the baby back. Zola hands the baby to Wonder Woman and Diana sees it’s a boy. Orion is thankful because it would bother him to kill a girl, to everyone’s irk.

CHAOS IN THE STREETS OF LONDON: WONDER WOMAN VS ARTEMIS!

Though he is now ruler of Mount Olympus, Apollo is still captivated by the prophecy that tells of a child of Zeus who will take the throne of Olympus by killing another of Zeus’ children. He believes that the child in question is Zeke, born of the human Zola. His reflection is interrupted by Poseidon, who mocks Apollo’s claims that he has gentrified Olympus, and is ushering in an age of reason rather than violence, given that Apollo has just sent Artemis to kill Zeke.

Artemis’ arrival is soon followed by Wonder Woman‘s intervention. The moon goddess warns that Diana had sworn an oath that she would destroy the child if it turned out to be true that Zeke was a threat to the Olympian throne.[1] She has come to either watch her do it, or to do it in her stead. While Diana lunges at Artemis, Zola rushes into the living room with Zeke, and begs Hera and War for help. It is Lennox though, who takes the child from her, assuring her that his stone body makes him the best protector. As they escape, War comments that the child is hardly worth all of this effort.

ROUND 1: WONDER WOMAN AND ORION ARE NO MATCH FOR FIRST BORN. THEY ESCAPE TO NEW GENESIS

At that moment, a Boom occurs and Orion appears. He kicks First Born and sends his Astro-Harness to retrieve Zola and Zeke. Finally, Zola and Zeke come on the Astro-Harness and Lennox, Wonder Woman and Orion open a Boom Tube. As they attempt to escape, First Born prevents the Boom Tube from closing, claiming to fulfill the prophecy. The Boom Tube connects any two points in the universe “but to exit the entrance has to close.”1 When Orion says they are close to critical mass and the Boom Tube might implode atomizing them, Lennox sacrifices himself. He flies into First Born with a loud Boom. They arrive on New Genesis.

ROUND 2: WONDER WOMAN IMPALES BOTH WAR AND FIRST BORN TO BECOME THE NEW GODDESS OF WAR

7 thoughts on “DC Day: After She Finished Off Ares Impaling First Born And Him To Prevent The Prophecy, Olympus Declared Wonder Woman The New Goddess Of War”