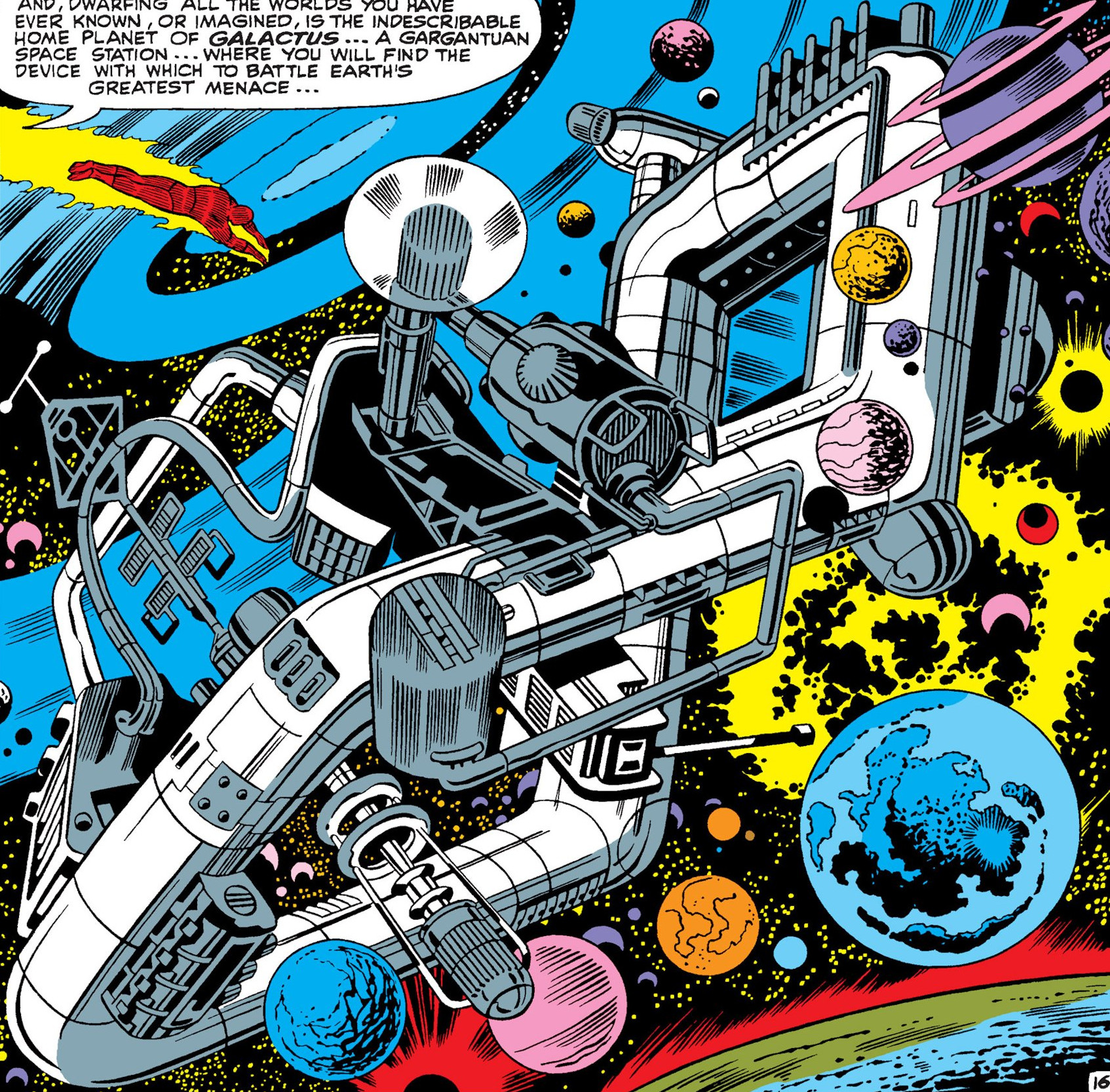 In the cosmic hierarchy, Galactus maintains the cosmic order by consuming the living energy of planets, whether they are inhabited or not. Galactus has a cosmic hunger which is his weakness and his burden as a cosmic entity.

In the previous universe, Galan lived on Taa. Upon surviving the destruction of his home universe, Galan incubated in a Cosmic Egg merging with the Sentience of the Universe. Emerging from the Cosmic Egg, he was observed by a Watcher who realized the tremendous power the nascent Galactus possessed to feed on the living energy of planets but the Watcher decided not to kill Galactus.

Sensing his hunger, Galactus consumed the nearby planet of Archeopia.

After emerging from his incubation cube millions of years after the Big Bang, Galactus consumed the nearby planet Archeopia; this was the first world to fall prey to his insatiable hunger. Galactus felt compelled to create a monument to his dead homeworld Taa, which existed in the previous universe, and to the ravaged planet Archeopia.

Galactus used the remains of Archeopia as the raw material from which he created the enormous Taa II. Construction took millennia to complete, due to Galactus’s need to take breaks in search of sustenance. When it was completed it engulfed the entire Archeopian System.

Galactus intended Taa II to surpass any natural world in size, beauty and splendor. Based on accounts from the few beings to step foot in it, such as Mister Fantastic, Galactus easily met his goal.

Indeed, Taa II is so massive several planets and even a star are held captive by its gravitational pull.

IN FANTASTIC FOUR #50, THE HUMAN TORCH RETRIEVES THE ULTIMATE NULLIFIER FROM TAA II AND MISTER FANTASTIC MUST USE AS SPECIFIED BY UATU AGAINST GALACTUS

Mister Fantastic must use it as specified by the Watcher.

IN ‘DARKSEID/GALACTUS: THE HUNGER’, GALACTUS USES THE SPHERE-SHAPED STARSHIP IN ORDER TO CONSUME APOKOLIPS

In ‘Darkseid/Galactus: The Hunger’ (1995), the Silver Surfer travels to the DC multiverse and reaches Apokolips. Sensing there are life forms on it, he sends a summons for Galactus.

Galactus arrives in a sphere-shaped starship and immediately touches down on the planet. Then, he begins construction of his elemental converter in order to convert the planet into living energy and consume it. Darkseid and his armies resist. However, when Darkseid attempts to erase Galactus with his Omega Effect, it fails. Galactus seemingly wins the battle by blasting Darkseid away. However, when he begins to consume the planet, he senses no living energy.

With that, Darkseid wins by instructing Galactus that he sought to defend his planet simply because he is its ruler.

FEAT OF THE DAY: IN ‘MARVEL SUPER HEROES SECRET WARS #9’, GALACTUS ABSORBS TAA II IN ORDER TO FIGHT THE BEYONDER