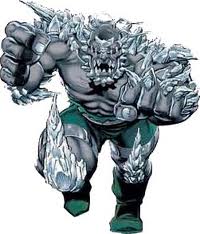 200,000 years ago, an alien scientist named Bertron had the dream of creating the Ultimate on Krypton. Early Krypton was very harsh and hostile and the life-forms living there were the deadliest creatures in the universe. The child that would become Doomsday was created by a process of forced evolution. He was exposed to the harsh environment, killed, its remains collected then cloned then the process was repeated a thousand times. Eventually, the creature evolved the ability to come back from the attack that killed it. Doomsday proceeded to eradicate all the harsh life-forms on Krypton.

Doomsday ended up on Calaton, a very scientifically advanced world. For three years it laid waste to the planet until it reached the capital. The scientists worked to devise a solution and finally, the members of the Royal family who had meta human abilities were merged into the being called the Radiant. For a week, he battled Doomsday until in an all-out energy attack he was able to kill the creature. Doomsday was bound but its body was not destroyed to prevent it from entering the afterlife and sent into space. It crash-landed on Earth, buried deep within its mantle.1

DOOMSDAY AND SUPERMAN DIE IN BATTLE IN METROPOLIS

Doomsday emerged to the Earth’s surface. He was met by the Justice League and was named Doomsday by Booster Gold. Doomsday beat them with ease with one hand tied behind his back.2,3 Superman soon met him and a battle across the U.S. states followed. Superman realized the creature was headed for Metropolis.4,5 Eventually, Superman fought Doomsday to a standstill. Finally, both combatants dealt each other the final blow. Apparently spent, they both died.6,7