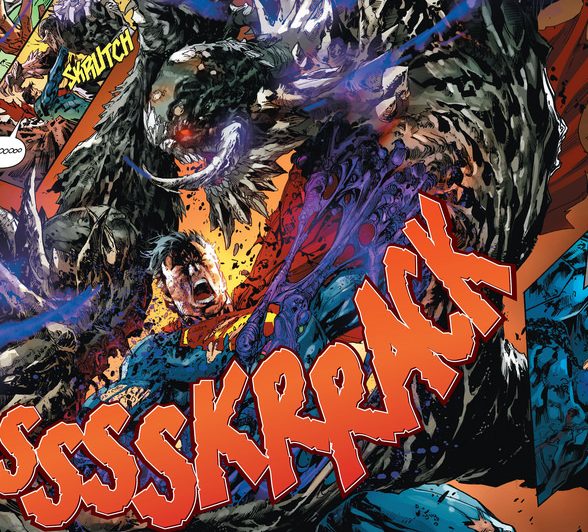 In “Super Power Explained: Is The Omega Effect, Universal Or Multiversal In Power Level?,” we rated Darkseid’s Omega Effect. In a few words, Darkseid’s Omega Effect is Universal Level since it managed to kill Doomsday. However, due to Doomsday’s reactive evolution, the monster survived the onslaught. Dangerously, it nearly fatally injured Darkseid. To rate the super power, we looked at the destruction of Doomsday at the end of Superman/Doomsday: Hunter/Prey. To sum, it took the entropy at the end of the DC Universe to kill the monster.

On this list, let’s rank those heroes and incarnations that have performed best to worst against the Ultimate in battle. In addition, let’s list the relevant issues.

In Superman/Doomsday: Hunter/Prey (1994) #3, Superman learns the origin of Doomsday from Waverider. 200,000 years ago, the Ultimate was born on Krypton from genetic engineering by a scientist named Bertron.

Despite Mother Box’s amps, Superman is no match for Doomsday. In effect, his reactive adaptation enables him to evolve to counter Superman’s attack. And, his power of immortality prevents Superman from killing him in the same way twice.

Nevertheless, using Waverider’s Temporal Transporter, Superman transports Doomsday to the end of the universe. There, entropy effectively kills Doomsday. Then, a reconstituted Waverider transports Superman back to the present.

Clearly, one of Superman’s clearest victories. Here, Superman used both brawn and brain to put down the monster. Definitely, it belongs at the top of the list.

During the New 52, Doomsday resurfaced as a plague. Terrifyingly, the monster was stealing sentient life forces. To this end, it was in order to be powerful enough to fight Superman.

In Superman: Doomed (2014) #1, Superman and Wonder Woman hunted down the creature in Botswana. However, it spent its time teleporting around the Earth. In fact, it was corrupting all life in its vicinity with its toxins.

Eventually, Superman confronts the menace in India. Then, he takes the fight to outer space. On Venus, Superman destroys the monster with a blast of heat vision. Back in Smallville, the monster follows the Man of Steel. In a vicious attack, Superman rips Doomsday in half, ending the threat.

Clearly, one of the most decisive victories against Doomsday. Definitely, a Herculean effort.

CHECK OUT THE SUPER POWER: ‘Justice’ Proves Shazam May Be Faster Than Superman On The List Of DC’s Best Speedsters

Previously, Doomsday held Wonder Woman on the ropes in Superman/Wonder Woman (2013) #1. Until Superman arrived on the scene. Then, Doomsday teleported away.

Similarly, in Round Two, the situation repeats in Superman: Doomed (2014) #1. But, this time, Wonder Woman performs better against the plague. With a strike of her sword, Wonder Woman pierces Doomsday’s thorax. As a result, the monster releases deadly poison. Though Wonder Woman is infected, she continues the fight.

As Doomsday attacks, he is blasted by a dose of heat vision. In the nick of time, Superman has arrived to save his girlfriend. Strangely, before Superman can take down the monster, Doomsday teleports away. Perhaps, in fear of the Kryptonian.

Definitely, a victory for the Power Couple.

CHECK OUT THE ACTION: WONDER WOMAN VS DOOMSDAY

Promptly, it is time for a Maxima revival. Post-Crisis, the Queen of Almerac is a heavy hitter of the JLA. During “The Death of Superman,” Maxima and the Man of Steel were the only JLAers left standing against Doomsday.

A warrior-born, Maxima performed impressively against the creature. Though, her fierceness and her battle lust may have caused her undoing.

In her battle lust, Maxima removed a light pole from its base. With the gasoline gushing from a nearby gas station, the sparks from the light pole caused a huge explosion. Caught in the explosion, Maxima and Superman were knocked out. Later, Superman and Maxima are revived by Guardian. In the end, Doomsday survived and Superman decided to stop the monster alone.

Indeed, a good showing by a female warrior against the Ultimate.

In Superman (2001) #175, Joker unleashes Doomsday on the anniversary of the Last Son of Krypton’s death. On that day, President Luthor gives a speech commemorating recent events during “Our Worlds At War.” At the White House, President Luthor is under attack by the Berserker.

Disguised as a secret agent, Mac transforms into Martian Manhunter. For the first time, Doomsday displays intelligence and speech. Unfortunately, Martian telepathy has no effect. When Doomsday blocks J’onn’s punch, the Martian notes the creature is sentient.

Definitely, a bad performance against Doomsday.

In the Reign of Doomsday story arc, Lex Luthor has engineered his latest plot. Seemingly, he is responsible for letting loose four Doomsday clones. And their mission is to capture the former four Superman replacements during the Death of Superman.

At first, the monster appears to have evolved. During the battle, Doomsday rips off Cyborg Superman’s right cybernetic arm. Then, he cuts loose. With a blast of heat vision, Cyborg Superman destroys Doomsday’s left side. Strangely, Doomsday re-grows mechanical parts from the Watchtower.

Though Supergirl joins the fight. With the element of surprise, the Girl of Steel has the upper hand. Indeed, her strength and speed allow her to beat down on Doomsday.

Jealously, Cyborg Superman attempts to kill her. Heroically, Batman pushes him off, as the Cyborg’s blast misses. In a split second, Doomsday beats Cyborg Superman and Supergirl to unconsciousness.

Definitely, the lack of teamwork and the fact this was a clone show it is the worst performance against Doomsday.

3 thoughts on “Super Power Explained: Male And Female Warriors And Superheroes Ranked That Performed Best To Worst Against Doomsday”