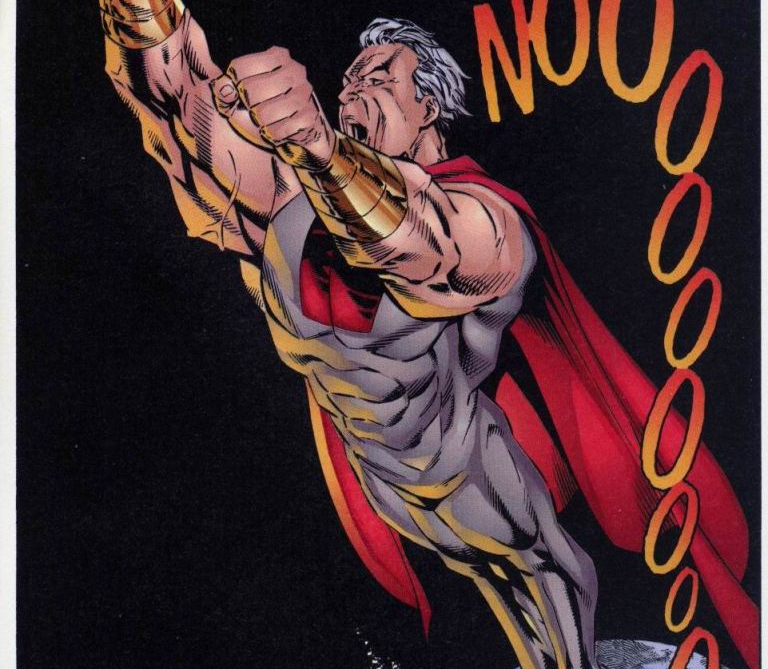 Notably, Alan Moore’s Supreme has been celebrated as the definitive version of the character. In 1994, Keith Giffen previously worked on the series. In many respects, ‘The Legend of Supreme’ gave the anti-hero his most distinctive style.

Really, the world of superheroes has its saviors, anti-heroes and vigilantes. To begin, the story is set in 1939. Fortuitously, a reporter named Maxine Winslow investigates Supreme’s “origin story.” But, what she finds about the hero is shocking. In “The Gospel According To Ethan Crane,” the savior reveals in a manuscript his religious motivations behind his particular brand of justice.

Here, Supreme blends the vigilantism of the Golden Age with religious crusading. In the Modern Age, superheroes are rarely portrayed as saviors, with right reason. However, Liefield’s more self-righteous hero is properly a messiah. And when Father Beam disapproves of his methods, tragedy follows.

Definitely, this story is a good primer on Supreme. What makes it work, is the earnestness of the characters and their chemistry. Without a doubt, it is geared towards an adult audience.

INTERESTED IN THIS STORY? CLICK ON “LEGEND OF SUPREME #’s 1-3 Complete story“ BELOW TO PURCHASE THE COMIC ON AMAZON.

To this day, Alan Moore is revered as a legendary writer in the comic genre. In fact, he won the 1997 Eisner Award for Best Writer. To this end, the comic legend has produced for DC Comics some of the most celebrated works in the genre. Namely, I speak of “Watchmen” and “V For Vendetta.” Furthermore, his work on Supreme led to a rebirth of the character in 1996.

Without a doubt, “The Story Of The Year,” is Moore’s most influential work on Supreme. Successfully, Moore converted Supreme from a violent ’90s Superman analogue to an optimistic Superman-like hero. As Reed-Hinckley Barnes from Multiversity notes, there is a meta message in Supreme’s story arc about superheroes and the stories about them.

To this end, Moore’s story arc incorporates Silver Age-style flashbacks into each issue’s narrative structure. In some sense, they are the result of editorial “revisions” that function as comics within the comic issue. In reality, following his quest for meaning, Supreme’s amnesia caused the character’s Limbo. Therefore, it was up to the character to regain his roots in order to truly become a Silver Age Superman. Certainly, the effect is to turn the whole work into a classic.

Indeed, Alan Moore completely revamped the hero. In fact, Supreme is every bit the Image Comics version of Superman: He was raised in Littlehaven where he began his superhero career as a Kid Supreme; as an adult, he moved to Omegapolis; Darius Dax, his nemesis is a Lex Luthor pastiche; Supreme even joined the Allies and the Infinity League in the 1940s. Overall, what makes the story arc work is its emphasis on family, tradition and child-like adventure.

Definitely, this story is essential Supreme and Alan Moore fans will love the Silver Age flashbacks.

INTERESTED IN THIS STORY? CLICK ON “Alan Moore’s: Supreme: The Story of the Year” BELOW TO PURCHASE THE COMIC ON AMAZON.

CHECK OUT THE REVIEW: ’80s HE-MAN AND MASTERS OF THE UNIVERSE STORYLINES RANKED FROM BEST TO WORST.

Notably, ‘Supreme: The Return,’ marks the grand return of Supreme’s arch-nemesis, Darius Dax. In “The Most Powerful Image Heroes From The ’90s,” Supreme is at the top. Unfortunately, due to a Moore company collapse, the last two issues in the arc were not completed. Nevertheless, this story arc is included on this list as important Supreme comics.

Moreover, Supreme’s level of power in the final issue is unrivaled. Indeed, in a meta-narrative, Supreme meets DC and Marvel pastiches before meeting the “Monarch.” In grand style, Supreme encounters the Writer, Jack Kirby, in idea space. Faced with Kirby’s world, the Writer states Supreme’s level of power allows him to achieve virtually anything. In fact, such is the nature of Supremium that it warps reality.

In the end, Supreme recounts his adventure to his new girlfriend, Diana Dane. Certainly, Supreme seems to have come of age, finally accepting his secret identity and his superhero life. Definitely, this is a must-have to your Supreme collection.

DO YOU READ COMICS? EVENT