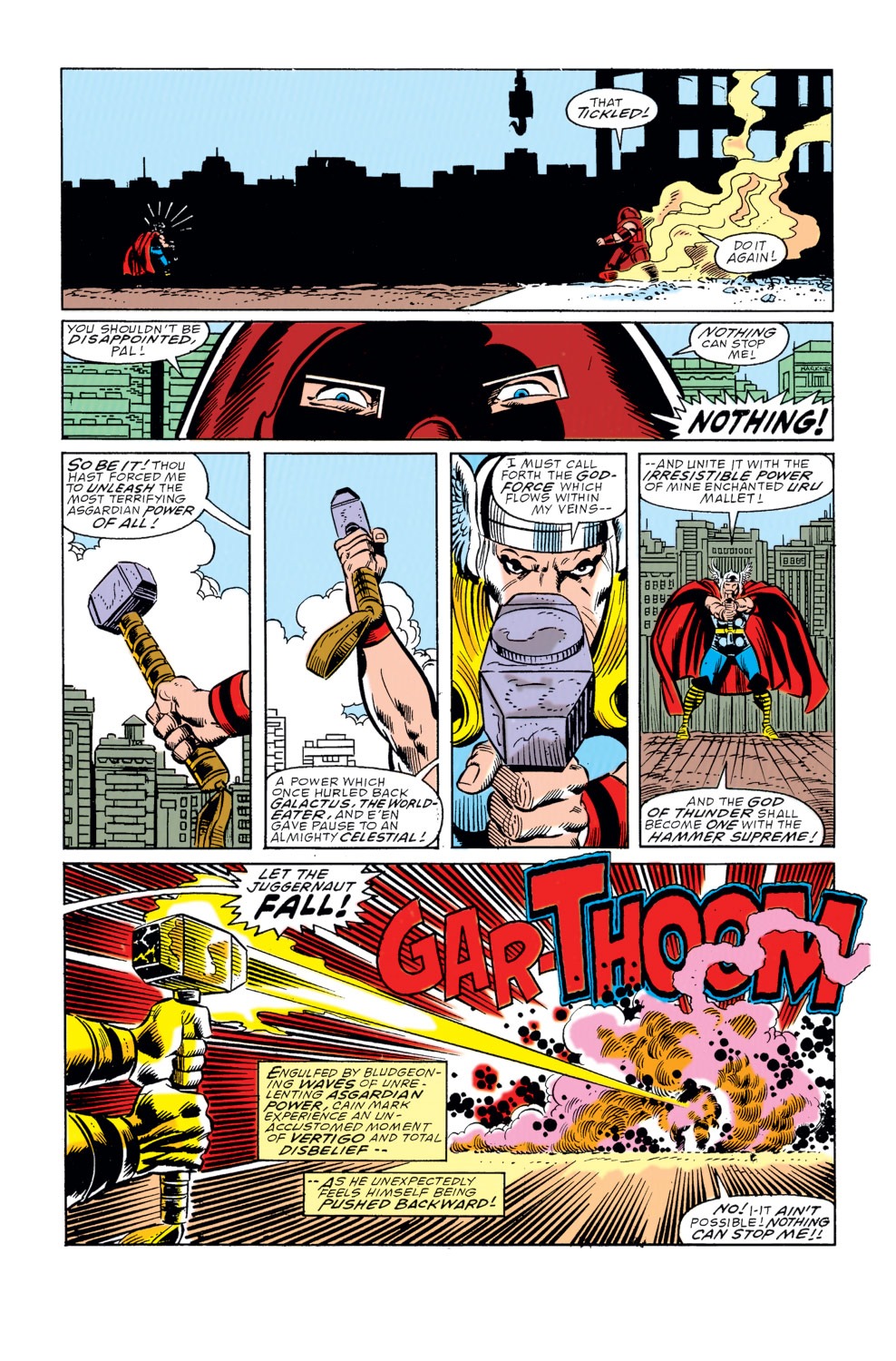 Today, we look at Thor’s terrifying super power. I speak of the God Blast.

Thor Odinson is the King of Asgard. After the War of the Realms storyline, Odin appointed Thor as King of Asgard. Thor is among the most powerful of Asgardians, second only to Odin if not more powerful. In battles of cosmic import, Thor is capable of unleashing his most terrifying super power: The God Blast.

God Blast: Thor is capable of channeling different amounts of his godly energies in combination with the mystical properties of Mjolnir. These energies can be channeled through his hammer for a single massive energy beam known as the God Blast which is able to kill even immortals.[228][229] Thor channeled his godly energies into Mjolnir to destroy the Brain Dome of the mighty Celestial Exitar,[228] the hammer shattered from the amount of power Thor channeled. The God Blast is so immensely powerful and destructive that it has proven capable of causing such a great degree of damage to a starving Galactus that he was forced to flee for his life.[230] The God Blast was also shown to be capable of knocking down the skymother Majeston Zelia.[231] Thor can send the God Blast to the core of Ego the Living Planet and Alter Ego and render both comatose.[232]

The God Blast is Thor’s own godly power. He is able to unleash it with the mystical hammer Mjolnir and on his own. It is capable of challenging and harming cosmic beings. Let’s look at some battles in comics where Thor used this destructive super power.

In ‘Thor’ (1989) #412, Thor and the New Warriors face the menace of the Juggernaut in New York City. Unable to stop the Juggernaut with a lightning attack, Thor focuses his irresistible super power. Thor unleashes the God Blast to push the Juggernaut backward.

The Juggernaut falls inside a crater. Firestar uses her microwaves to melt steel girders around Juggernaut into molten slag. Thor hardens the molten slag with a cold wind.

Then, Thor banishes the forlorn Juggernaut to a distant dimension. Thor and the New Warriors win by battlefield removal.

In ‘Thor’ (1969) #161, Thor and Recorder are drifting in space after Thor’s ship has been destroyed by the battle between Galactus and Ego The Living Planet. They are rescued by the Wanderers who seek Galactus’ destruction. Thor accepts to aid.

Thor strikes Galactus with his hammer causing Galactus pain for the first time in his existence. Thor attempts a frontal attack but Galactus has erected a force field. Galactus then tosses Thor to the surface of Ego The Living Planet.

Then, the Wanderers, Recorder and Thor construct a weapon that allows Thor to channel the energies of his terrifying super power. Thor lashes out a beam of God Blast at Galactus from Ego The Living Planet. The attack results for Galactus to be in agony and causes him to flee for fear of death.

In ‘Thor’ (2020) #5, during the Devourer King storyline, the Black Winter has arrived in the 616 Universe. Galactus is terrified at the Black Winter that orders him to shut up. The Black Winter calls Cosmic King Thor by “The All-Butcher” or the “End-God” and asks him if he wants to see his end.1

Thor finds himself in an Escherian maze of staircases, the Black Winter stating that it asked him a question. Thor furiously demanding for the Black Winter to show itself, the Black Winter stating that the arena Thor is in is an extension of itself, but that he cannot defeat it. Offering Thor the gift of the truth of how he will die. Thor shouts that he’s not afraid of the end, the Black Winter sneering that the end isn’t afraid of him either. Attacked from behind, Thor looks up in horror to see Gorr the God-Butcher seemingly alive and once-more bonded to the All-Black symbiote. As Gorr brandishes his Necrosword and gloats, Thor incredulously protests that he’d killed Gorr years ago, then angrily snarls that he’ll gladly do so again. Before Thor can attack, he’s impaled from behind by a spear and turns to see the original Loki, who gleefully mocks him. Snapping the spear, Thor bashes Gorr with Mjolnir and shouts at the Black Winter that he has had enough. The Black Winter sneers that Thor hasn’t nearly had enough as Mangog, Jormungand, Malekith, the Enchantress, Mephisto, Surtur, Apocalypse, the Juggernaut, Annihilus, and Doctor Doom appear. As Thor struggles against the horde of top-tier supervillains, the Black Winter muses that Thor has had many scrapes with death over the centuries of his life – naming the Beyonder and the Serpent as some examples before listing the various ways in which Thor has been killed. Finally, it brings up what was supposed to be his true end: fighting one-armed and one-eyed alongside his brother against the resurrected Gorr at the end of time, before sacrificing himself to hold off entropy. As Surtur and Magog punch Thor into Jormungand’s gaping maw, the Black Winter sneers that something has altered history’s course – slithering through time to kill Thor’s destiny and break his fate. As Thor breaks free from the Midgard Serpent’s jaws, the Black Winter asks if he wants it to show him how it all truly ends.

Thor feels Mjolnir is heavier and realizes something is wrong. Deciding not to give up, Cosmic King Thor unleashes the fury of his super power. Thor blasts the Black Winter with the God Blast making it bleed.