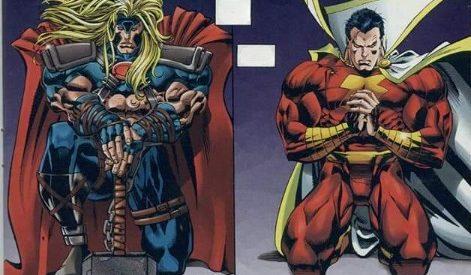 To #collectabattle, click on Buy On Amazon to buy now the comic.

SYNOPSIS FOR “ROUND TWO”

Axel Asher is receiving images of The Brothers.

Characters from the DC and Marvel universes are crossing the inter-dimensional barrier and traveling between the two universes.

Axel finds a man in a street with a glowing box who says he is trying to prevent something with duct tape. But it is too late.

The two brothers have awakened and there must be war between each universe’s champions or else, they will do war and destroy everything.

A contest of Champions! Captain Marvel (Shazam), the World’s Mightiest Mortal vs Thor, the God of Thunder!

Who wins, in this battle to decide whose universe survives the battle of the two Brothers?

On the left side, is Captain Marvel (Shazam), the Champion from New Earth. On the right side, is Thor, the warrior Prince from Asgard.

CHECK OUT THE ACTION: SUPERMAN VS HE-MAN.

In ‘Marvel versus DC’ (1996) #2, Captain Marvel (Shazam) and Thor duke it out in a knock-out drag-out fight to determine whose universe survives annihilation at the hands of the Brothers, a pair of powerful cosmic entities that represent the DC Universe and the Marvel Universe respectively.

The best battle to determine who is the greatest warrior of any universe!

How does the fight go?

What a battle! Turns out the results of the battle were determined by the creative team.

A FAN OF THOR AND MARVEL COMICS? SUBSCRIBE TO OUR NEWSLETTER TO RECEIVE THE LATEST POSTS ON YOUR FAVORITE MARVEL HEROES.