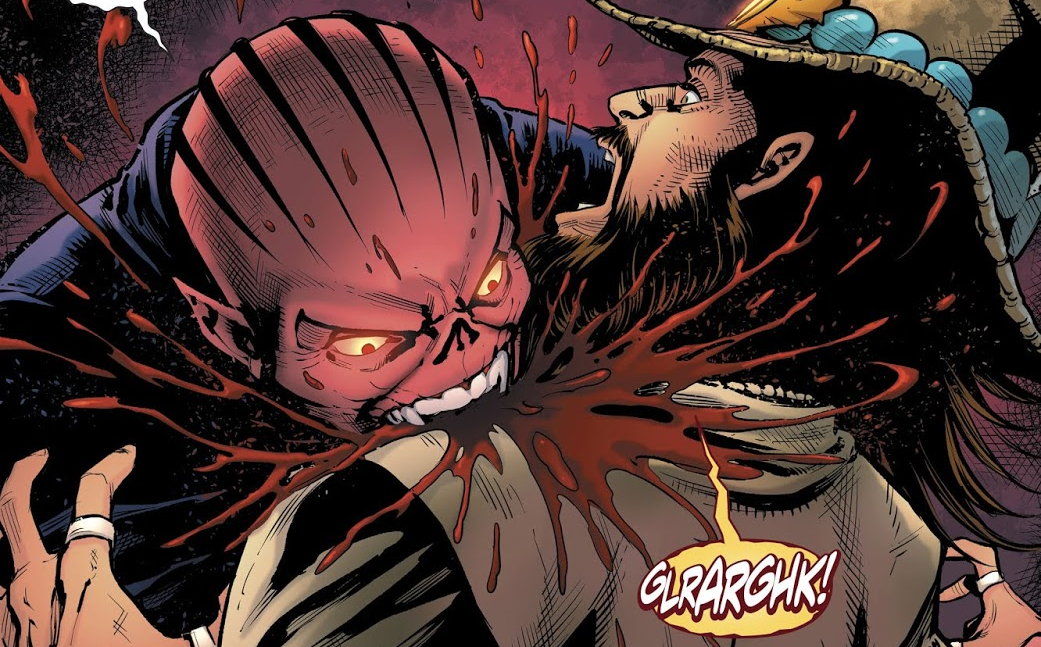 DAX NOVU WAS THE FIRST SON OF MONITOR-MIND THE OVERVOID

In ‘Superman Beyond’ (2008) #1, Superman, Captain Marvel and other supermen in the DC multiverse are recruited by Monitrix Zillo Valla. They embark on a journey through the DC multiverse in order to stop the ultimate threat: Mandrakk, the Dark Monitor. Stranded on Limbo, Captain Marvel are guided by Merryman to the Library of Limbo to find repair manual for the damaged Ultima Thule. There, they lift the Book of Limbo, which has an infinite number of pages.

The book tells of the origin story of the Monitors. The Monitors are described as a race of hyper-gods with Dax Novu described as the first son of Monitor-Mind The Overvoid.

After the trauma of the Crisis on Infinite Earths, the original solitary Monitor withdrew from reality to lick its wounds, only to discover that one of its wounds had left a scab in the shape of a giant superman made of divine metals. Believing that it was no longer possible for it to watch over its own, immeasurably large body, the Monitor began to subdivide itself. And the first of these subdivided Monitors was Dax Novu.

But what Novu found was a horrifying truth – the Monitors were parasites feeding on the Multiverse, and they were destroying it in the process.

WHAT IS THE BLEED?

When Superman embarks on his journey through the DC multiverse, Zillo Valla promises him the Bleed, the substance of life capable of healing Lois Lane who hangs between life and death at the hospital. When Superman and Ultraman are fused by Captain Adam into Thought Robot, Thought Robot ascends to the Nil to face Mandrakk. It is Cosmic Midnight, the door creeks, Mandrakk the Dark Monitor appears with the Bleed, or Ultramenstruum in his left hand. What is the Bleed?

THE 52 UNIVERSES EMERGED WITHIN BLEED LIKE CRYSTALS GROW IN SOLUTION

In ‘Superman Beyond’ (2008) #1, Monitrix Zillo Valla promises Superman the Bleed to save the life of Lois Lane if he succeeds in stopping the ultimate threat. Valla reveals to Superman that the substance known as the Ultramenstruum is actually called the Bleed in the germ worlds. Apparently, the 52 universes of the DC multiverse all grew within the Bleed like crystals grow in solution.

THE BLEED IS 4-D SPACE

In ‘Superman Beyond’ (2008) #1, the Ultima Thule is being attacked by a Bleedstorm caused by the Destroyer “Echo Of Midnight.”1 In order to process what is happening, Superman upgrades to 4-D vision. From there, he is able to see the space between dimensions as 4-D space.

MANDRAKK FEEDS ON THE BLEED

From hyper-god, Dax Novu turned into a vampire god and fed on the DC multiverse; he became Mandrakk. It is this universal substance that Superman conquers after defeating Mandrakk with the Cosmic Armor. When Superman retrieves the Ultramenstruum from Mandrakk, the Dark Monitor can no longer feed on the DC multiverse and apparently dies, lost in Monitor-Mind The Overvoid.

A furious battle between Superman and Mandrakk occurred, during which Mandrakk killed Zillo without recognizing her, and blamed Superman for his mistake. Eventually, Superman was able to knock Mandrakk into the Overvoid, where eventually even the thought of Dax Novu faded, ending his threat. Unfortunately, Rox Ogama, who was similarly exiled for his treason, simply assumed the powers and mantle of Mandrakk himself.

In “Dark Nights: Metal,” we learn that Cosmic Armor Superman cast down Mandrakk in the Dark multiverse. Following Barbatos’ failed invasion of the DC multiverse, the Unexpected began to investigate a signal they believed to be an Nth metal isotope. They ended up at Nil.

Mandrakk revealed that he had never in fact perished during his conflict with Superman. Instead, his fall through the Overvoid ended in the Dark Multiverse. Determined to return to the proper multiverse and nourish himself on the Bleed, he began giving off a signal which individuals such as Quench foolishly believed was an invitation. In fact, it was bait, and he fed upon those who came to find him in order to crawl back out of the abyss, eventually arriving at Nil.

SUBSCRIBE TO RECEIVE NEWS, UPDATES ABOUT “SUPERMAN, THE GREATEST STORY” AND UPCOMING WIKIS

FEAT OF THE DAY: IN ‘THE UNEXPECTED’ #7, MANDRAKK FEEDS ON THE BAD SAMARITAN WHO IS POWERED BY THE FIRES OF DESTRUCTION

5 thoughts on “Super Power: Mandrakk’s Vampiric Power Derives From Feeding On The Bleed”