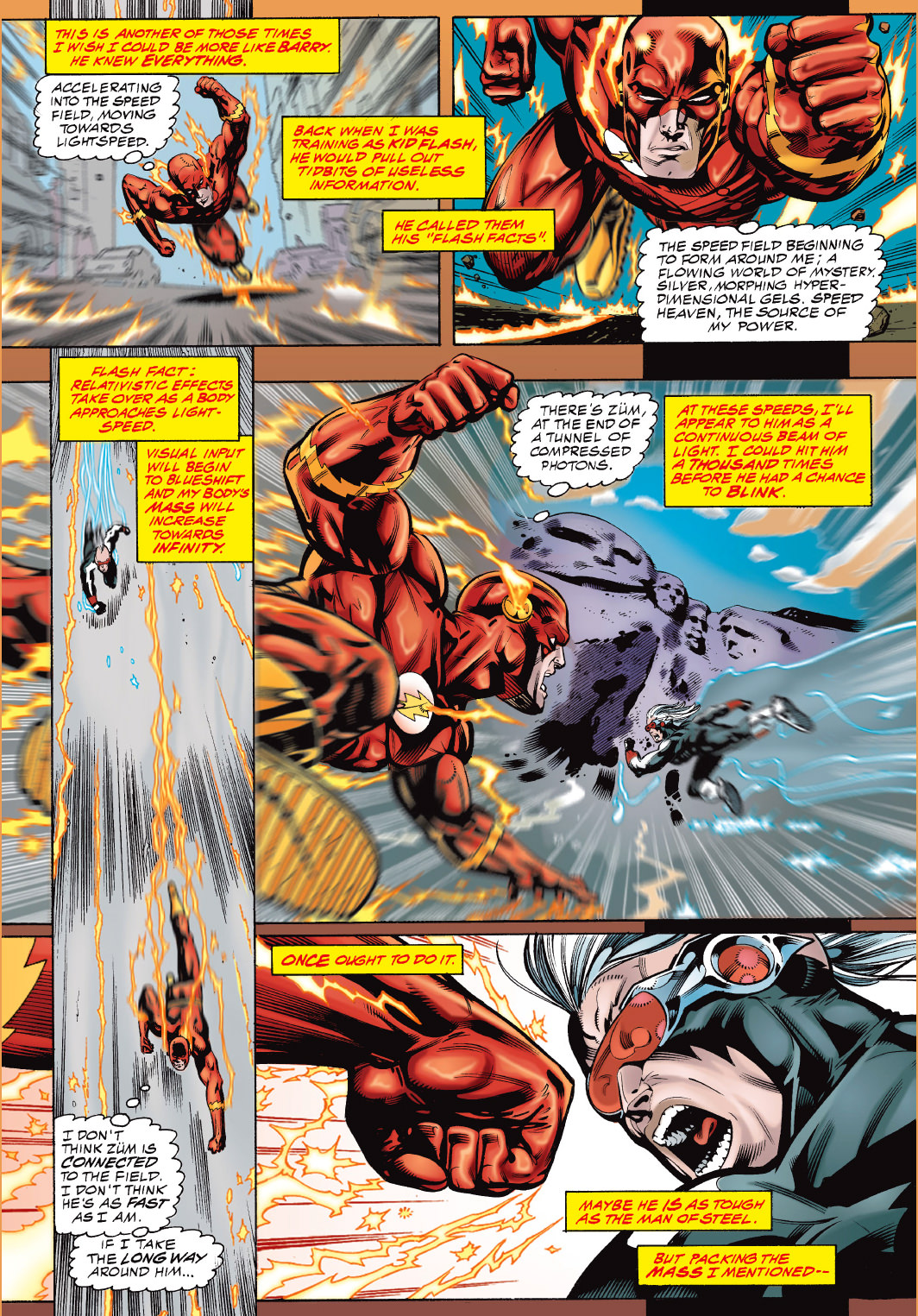 Flash (Wally West) is a speedster and is one of the fastest superheroes in reaction time, combat speed and traveling speed. The Speed Force powers all of Flash’s amazing super powers.

Post-Crisis, Wally West passed from Kid Flash and took up the mantle of Flash. Wally West has more than lived up to the name of Flash and has displayed additional super powers different from Barry Allen.

Speed Force Conduit: Wally is the fastest of All Flashes perhaps rivaled only by his mentor, Barry Allen. He is arguably the fastest person that has ever existed.[59] He is currently fast enough to easily break all the barriers and even enter the Speed Force. Wally has, on several occasions, traveled much faster than light and entered and exited the Speed Force by his own volition. The Flash is considered to be one of the most formidable and powerful meta-humans on the planet.

Superhuman Speed:  Wally West is by far the fastest being on the planet, according to Max Mercury he’s the fastest man to have ever existed[59], making him one of the most powerful beings to exist. Wally can move faster than thought and with the aid of other JLA members, came up with a plan within 1 second. Wally managed to move so fast that time apparently appeared to be frozen around him. […]

WHAT IS THE INFINITE MASS PUNCH?

IN ‘JLA’ #3, FLASH KNOCKS OUT ZUM WITH THE INFINITE MASS PUNCH

In reality, Flash is able to use his time traveling powers in order to do the Infinite Mass Punch. This is because according to special relativity, time dilation is a factor when one approaches the speed of light. This is a difference of relative time between an observer and an object or subject in movement.

The Infinite Mass Punch is a relativistic effect of the Flash’s time traveling super powers from his connection to the Speed Force.

The Infinite Mass Punch is a time travel fighting technique. In the issue, when Flash accelerates his mass to infinity, perception is altered. To Zum, he appears as a continuous beam of light. Though, Flash is not able to access the time-stream. However, Flash does have infinite kinetic energy. Converting his kinetic energy into infinite mass, Flash delivers a punch with an Infinite-Level of Super Strength.

At the same time, the IMP is an extension of time travel. According to general relativity, time dilation is an important factor when approaching the speed of light. In fact, time dilation affects the relative passage of time. In the IMP, time dilation is a factor since both fighters experience time differently. For Flash, time has slowed down. For Zum, time has sped up.

Indeed, the Infinite Mass Punch is an effect of Flash’s Speed Force Conduit. With the Speed Force, Wally is able to transcend general relativity and perform superhuman feats.

FEAT OF THE DAY: IN ‘THE FLASH’ #148, FLASH HITS PROFESSOR ZOOM WITH A WHITE DWARF PUNCH