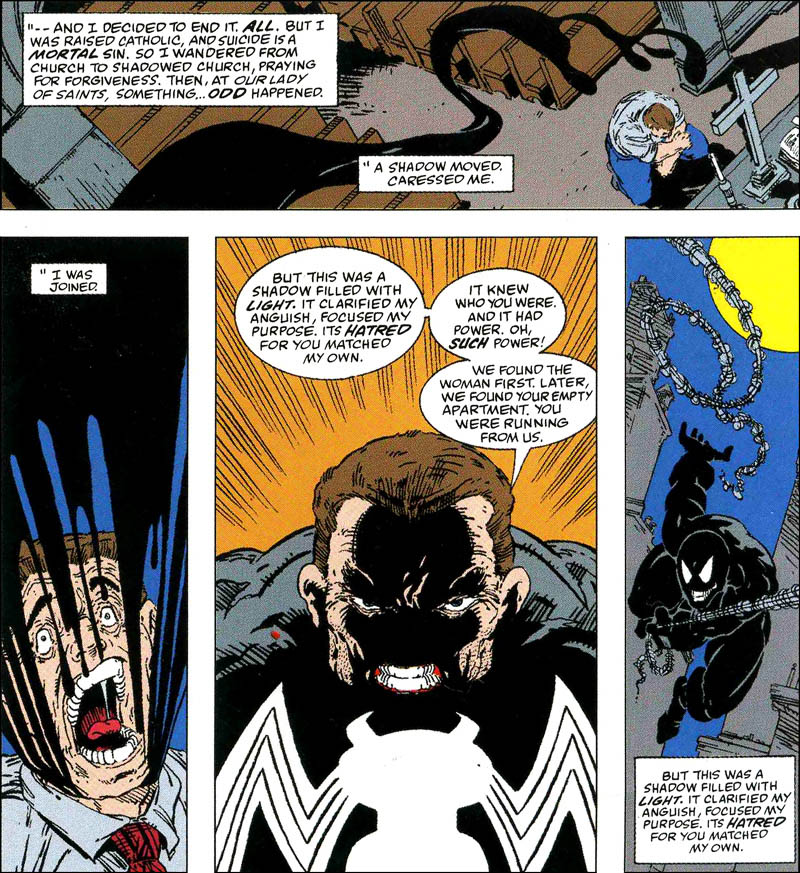 A HISTORY OF THE SYMBIOTE

In ‘Venom’ (2018) #4, the dark Elder god Knull in Knowhere tells Eddie Brock about the origin of the Venom symbiote, the Klyntar.

The story begins with the Elder god Knull “in the beginning” being invaded in his dimension by the Celestials.1 Seeing it as a war between light and darkness, Knull summons a sword out of the Abyss and decapitates a Celestial.

Then, using its remains, he forges the necrosword, the beginning of the symbiote. He sets out to attack the night and is then repelled onto a desolate, abandoned planet. Then, Knull creates the symbiote on the planet by bonding his abyss with lesser creatures. Eventually, Knull raises an army to slay gods across the galaxy until they reach Earth.

The Grendel, which is a dragon sent by Knull to slay worlds, reach Earth and are slayed by Thor’s lightning bolt. The bond between Knull and his army is broken across the galaxy and the symbiotes become infected by “venom”.1 They become the Klyntar and rise up against Knull who is consumed by the darkness.

In ‘Venom: Dark Origin #4’, the symbiote tells Eddie Brock his origin story. He remembers 60,000 light-years away and being born on the nameless desolate planet. There, Venom protects a rodentoid alien by transforming it into an apex predator.

VENOM HAS HAD TWELVE HUMAN HOSTS

Venom has had twelve human hosts. In Deadpool’s Secret Secret Wars #3, Venom’s first human host was Deadpool on Battleworld. Deadpool wore the symbiote moments before Spider-Man would come to use it to repair his damaged costume. Deadpool realized the symbiote had bonded and was interfacing with his mind. Fearing that his insanity would affect the symbiote, he returned it to its prison.

Another notable host of the symbiote has been Flash Thompson. In ‘Amazing Spider-Man’ (2011) #654, Flash Thompson became Venom after he was enlisted onto Project: Rebirth 2.0. Flash was bonded to the symbiote acquired after the Siege of Asgard. Once bonded, Flash was able to regenerate his legs and had powers similar to Spider-Man’s.

Head over to “Characters That Wore The Venom Symbiote” by Variant Comics.

CHECK OUT THE STORY: LUKE SKYWALKER TAKES ON DARTH VADER

In ‘Amazing Spider-Man’ (1988) #300, Daily Globe journalist Eddie Brock publishes about the Sin-Eater. Suffering from adrenal cancer with a few months to live, journalist Eddie Brock wanted to break out a story for the Daily Globe. He was contacted by Emil Gregg who claimed to be the Sin-Eater. He began publishing front-page exclusives protecting the Sin-Eater’s identity under the First Amendment until pressure from the police and his editor forced him to reveal the Sin-Eater as Emil Gregg. From that time, Eddie was filled with hate for Spider-Man.

Unfortunately for Eddie, that same day, Spider-Man and Daredevil captured the real Sin-Eater and revealed his identity to be Detective Stan Carter. He was fired from the Globe, his wife Anne left him and his father disowned him. Seeking redemption, he headed to Our Lady Of Saints Church to beg forgiveness from God and commit suicide. Once inside, he was attacked by the alien symbiote and bonded to it. The symbiote bonded to Eddie mentally and physically and revealed that he had posed as Spider-Man’s costume, but that Spider-Man had attempted to kill it using the church’s bell tower. Eddie’s despair, rage and fierce hate for Spider-Man fed the symbiote. Venom was born!