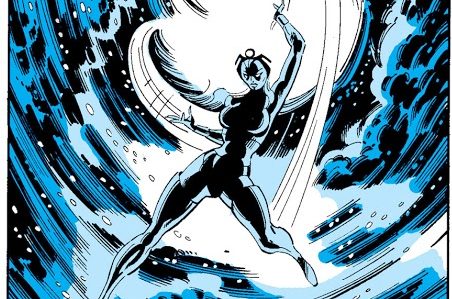 Before joining the X-Men, Ororo Munroe was worshipped as a rain/fertility goddess by local tribesmen in Kenya. When the original X-Men team was missing, Professor X assembled new members to rescue them. During the first meeting, Professor X revealed to Ororo that she was not a goddess, instead, she was a mutant. Really, he made her the offer to discover the real world and fight for the cause of mutants. Curiously, Ororo accepted.

STORM’S WEATHER POWERS ARE THE RESULT OF MUTATION

Correctly, Storm’s weather powers are the result of mutation. In fact, Storm is one of the powerful mutants on Earth. Furthermore, the X-Man has been classified as an Omega Level mutant. With training and experience under Professor X’s direction, Storm has grown in skill, power and leadership.

An instance that supports Professor X’s thesis is Feat: Black Panther, ‘Doomwar’ #1. Here, T’Challa proactively invented a cell that nullifies the X-gene. Effectively, Storm has no powers under such conditions. However, there is evidence that Storm’s powers are based on magic and witchcraft.

Atmokinesis: Storm is one of the most powerful mutants on Earth and has demonstrated a plethora of abilities, most of which are facets of her power to manipulate the weather.[167] Storm possesses the psionic ability to control all forms of Weather Manipulation. She has been able to control both Earthly and extraterrestrial ecosystems on several occasions. [Storm] can modify the temperature of the environment, control all forms of precipitation, humidity and moisture (at a molecular level),[167] generate lightning and other electromagnetic atmospheric phenomena, and has demonstrated excellent control over atmospheric pressure. [Storm] can incite all forms of meteorological tempests, such as tornadoes, thunderstorms, blizzards, and hurricanes,[168] as well as mist. She can dissipate such weather to form clear skies as well.

INTERESTED IN THIS STORY? CLICK ON “X-Men: To Serve and Protect” BELOW TO PURCHASE THE COMIC ON AMAZON.

In ‘Marvel Tarot’ (2007) #1, we find out about Storm’s line of ancestry. In reality, Ororo Munroe descends from a line of witches. All of them, have distinctive white hair, blue eyes and the potential to wield magic. We can formulate two theories to explain Storm’s super powers.

First, Storm’s super powers showcase magical potential and properly unite science and magic. Here, the evidence that supports our hypothesis is the fact that Storm derives power from faith. In Wakanda, she is properly worshipped as a Goddess of the Storm. Furthermore, Black Panther, her former husband and King, considered her a goddess.

Second, Storm’s super powers are both divine and genetic. As Goddess of the Storm, she can hear and grant prayers. At the same time, her godhood is both the result of religion and magical inheritance. Indeed, Storm has both white hair and blue eyes. Therefore, these phenotypes presuppose a genetic basis. In addition, there is evidence that her powers are based on the X-gene. In conclusion, this may provide a rare case in the Marvel Universe where magical potential has a genetic basis. Moreover, it is possible that the X-gene is itself recessive.

For more information, refer to Mutant Biology on Marvel Database.

FEAT OF THE DAY: IN ‘X-MEN: TO SERVE AND PROTECT’ #3, STORM USES THE LOKI-CREATED STORMCASTER TO TRANSFORM INTO THE GODDESS OF THE STORM