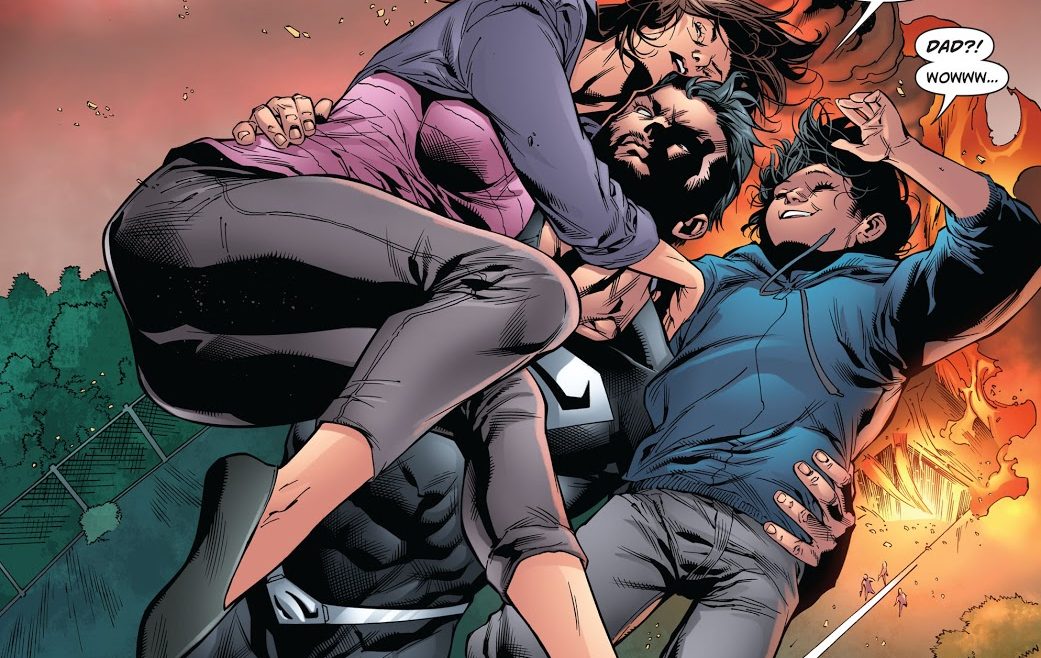 Home » DC Day » DC Day: After ‘Convergence,’ Superman Amazingly Becomes And Learns To Be A Dad, Protecting The Superman-Family

IN Squads, Teams And Leagues

In Convergence (2015) #1, a depowered Man of Steel has impregnated Lois Lane. During the event, Brainiac gained access to the Vanishing Point. With the knowledge, he restored cities from erased and alternate planets on a planet called Telos. Beyond the Bleed, he located Telos at the edge of the multiverse. Though, the planet was abandoned by Brainiac. To this end, its programming was for the cities’ champions to fight to the death. Only one city can survive. During the crisis, Superman was depowered by a dome that appeared on New Earth. But, on the day the dome receded, Superman recovered his super powers.

In Convergence (2015) #2, Superman and Thomas Wayne help deliver the baby. In Gotham City, the champions from Flash’s timeline have attacked Superman. During the battle, Cyborg attacks the Man of Steel. Only for Superman to incinerate his arm with heat vision. Then, he heads to his apartment in Gotham but Lois is not there. In fact, Subject One, an alternate Superman, has taken her to the Batcave. Quickly, Superman arrives and makes short work of Subject One. Then, together Superman and Thomas Wayne help deliver Lois’ baby. Because Superman considers himself human, he names the boy Jonathan Samuel Kent.

AFTER BEING KIDNAPPED BY INTERGANG, JON KENT LEARNS HIS ORIGIN

In Superman: Lois and Clark (2016) #7, Superman saves Lois and Jon from Intergang. During the kidnapping, Jon develops super powers. After a battle with Blackrock, Superman heads their way. At that time, the kidnapped are surrounded by Intergang thugs. As the thugs open fire, Superman swoops in. In the nick of time, Superman saves the Super-Family.

Back home, Lois tells Clark of how Jon was able to escape a burning closet. Angrily, Jon demands answers about his origins. Thus, Superman explains they meant to protect him. In reality, the Super-family is from an alternate universe. Moreover, the Superman and Lois they read about are from the current universe. In fact, they never expected Jon to develop super powers.

In Superman (2016) #2, Superboy learns to focus his heat vision. To begin, Superman flies with Superboy to the Arctic. There, he teaches him how to rescue a Coast Guard submarine. Once the submarine, is rescued, Superman shows Jon how to fix the propeller. Suddenly, a giant squid erupts from the oceans. Soon, Superman discovers that the beast is controlled by a crystalline machine.

Quickly, Superman orders Superboy to fire his heat vision to melt it. However, the beam is unfocused and it burns Superman’s back. Summarily, Superman tells Jon to focus his heat vision. While revealing his Superman emblem, Superboy focuses and succeeds. Soon, the beast is released back to sea. Later, Superman reminds Jon that the meaning of the S emblem. Indeed, it means doing the right thing.

In Superman (2016) #8, Superman, Superboy and Krypto are stranded on Dinosaur Island. At the Fortress of Solitude, Superman and Superboy are working on Superboy’s science fair. In fact, they are working on a self-controlled flying saucer. After the saucer is completed, it activates on its own. Then, assimilating the Fortress’ tech, it transports the Super-Family. In Superman (2016) #9, Superman and Superboy encounter Captain William Storm. Unfortunately, he is the sole survivor of the WWII Losers.

Together, they must find a way back home. Meanwhile, Superboy shows Captain Storm a drawing of the transporter. Immediately, Storm recognizes it. And they journey to the other side of the island. There, they meet an ape with cybernetic eye. Opposingly, it orders the creatures to attack them. Luckily, Superboy locates the transporter, which Superman activates. As the Super-Family is transported home, Captain Storm stays behind to fend off the creatures.

CHECK OUT THE STORY: Like “Fire And Ice,” Superboy’s and Knockout’s Groovy Team-Up Against An Amped Killer Frost.

In Action Comics (2017) #987, Mr. Oz unmasks to Superman for the first time. Previously, Mister Oz was instrumental in Superman Reborn (2017). Mysteriously, he reveals himself as Jor-El, Superman’s birth father. In The Man Of Steel (2018) #6, Superman loses his family. Strangely, Mister Oz proposes to take Jon on a tour of the galaxy.

When Clark opposes it, Jor-El retorts that the Teen Titans rejected Superboy’s membership. Indeed, there is something wrong with Jon. Despite Clark’s strong opposition, Lois departs with Jor-El and Superboy. In case of danger, Clark gives her his Superman costume. Also, he tells her about the button in the belt buckle to adjust the size.