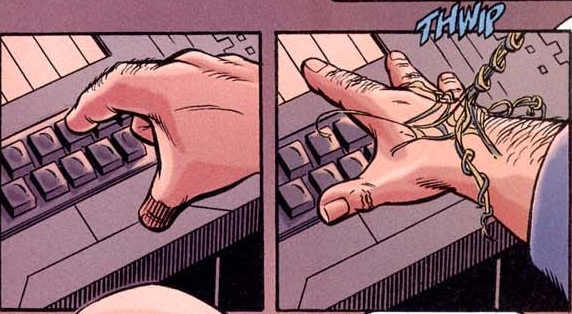 IN TEAM-UPS AND CROSSOVERS

In Batman and Spider-Man (1997) #1, Kingpin makes a deal with Talia Al Ghul. On Earth-7642, Kingpin and Talia’s organization have been working together. For months, they have been assisting each other’s operations, increasing wealth. But, Talia continues to keep her organization’s head a secret. Strangely, she proposes to import cargo into New York without customs’ interference.

Visibly, Kingpin reveals the terrorist organization’s plan to extend its operations to NYC. Angrily, Fisk declines her proposition. However, Talia offers to cure Vanessa Fisk’s cancer. Outside, Batman is spying on the criminals with goggles. Suddenly, Spider-Man comes in and shares intel. When Spider-Man questions if Talia works for a crime cartel, Batman says no. After a brief scuffle, both superheroes agree to work together.

Surreptitiously, Ra’s Al Ghul lures Kingpin into his lair in Nanda Parbat, Tibet. There, Kingpin learns that Ra’s is long-lived. In fact, the secret of his longevity is the Lazarus Pit. Surprisingly, Ra’s Al Ghul blackmails the Kingpin in order to cure Vanessa’s cancer. In exchange, Kingpin must swear allegiance to Ra’s, the new leader of the world. As a test, Kingpin must punch in the satellite codes to activate devices that will sink NYC.

At that moment, Spider-Man storms into the cave. Violently, a fight follows with Ra’s men. Interestingly, Ra’s senses “The Detective” is not far behind.1 Summarily, the eco-terrorist orders Kingpin to punch the code. When he does, the satellite explodes. Then, it is revealed that Wilson Fisk re-programmed the satellite. Previously, he had amassed a “formidable dossier” on Ra’s in addition to “schematics on his stronghold and operating systems.”1

CHECK OUT THE STORY: In A Banging Crossover, The JLA And WildC.A.T.s. Team-Up Against A Time Lord.

INTERESTED IN THIS STORY? CLICK ON Batman & Spider-Man (New Age Dawning) BELOW TO BUY THE COMIC ON AMAZON.

TO ADD INSULT TO INJURY, THE DEMON DOUBLE-CROSSES THE CRIME LORD

In fact, Batman reveals Ra’s Al Ghul manipulated the Kingpin. In reality, the demon caused Vanessa’s cancer to lure Fisk into his plan. When Kingpin found out, he joined forces with Batman. Furthermore, Batman and Spider-Man boarded Fisk’s plane to Tibet. Visibly amused, Ra’s proposes to let the heroes to walk out alive. Even, he offers them transport.

Really, Spider-Man is surprised at Ra’s arrogance. But Batman states the heroes should accept their victory and leave. In fact, none of them would leave alive if Ra’s wanted to. Resolutely, Fisk asks for the antidote to his wife’s cancer. Shockingly, Ra’s lies that there is no antidote. Privately, Talia tells Batman she chooses to both love him and be at his father’s side. In secret, she commissions the antidote to Batman. Finally, Batman gives the antidote to Spider-Man, who delivers it to Fisk.