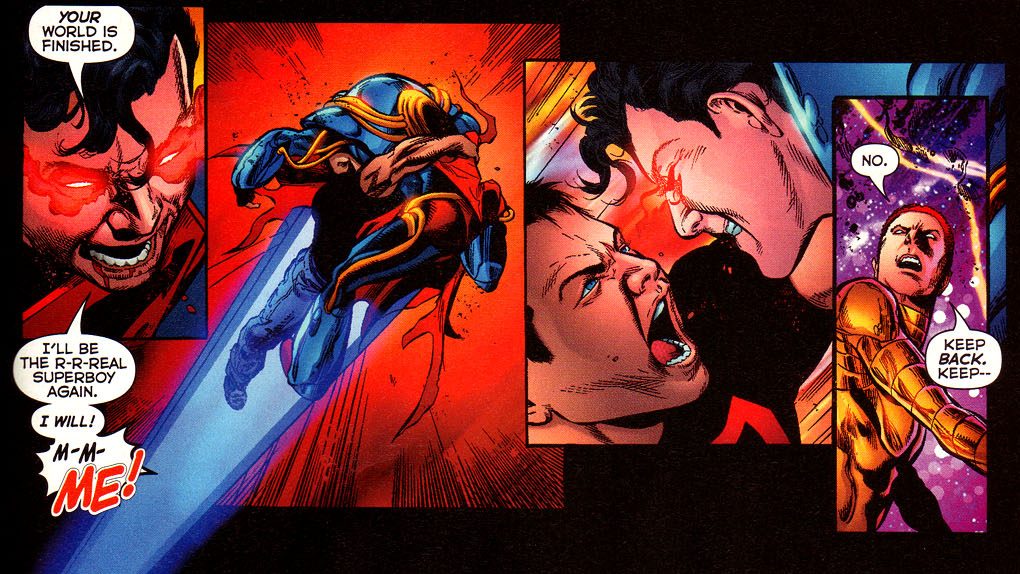 *To commemorate the 16 year anniversary of Infinite Crisis #6

In our new hotness, we have The Best Sellers List. Here, we cover the greatest battles of a particular character in a comic or series, and how it made it a best-seller. In our new hotness for May, is Superboy-Prime in Infinite Crisis #6-7.

A FAN OF THE DC MULTIVERSE? CLICK ON INFINITE CRISIS OMNIBUS (2020 EDITION) BELOW TO BUY THE HARDCOVER ON AMAZON.

Namely, the creative team on the story arc is legendary talent. In a few words, writer Geoff Johns and the late artist George Perez collaborate on the story arc. For his part, the legendary artist has produced classic works such as Crisis On Infinite Earths, the Post-Crisis reboot of Wonder Woman and the New Teen Titans.

When both superstars collaborate on this work, you expect a classic. In fact, the creative team is not pulling any punches!

Really, Infinite Crisis is the sequel to Crisis on Infinite Earths. If COIE is about a mad god’s desire for multiversal annihilation, IC asks the question: Who is the true Superman to lead the heroes of New Earth?

With a tightly built plot, IC was THE DC crossover event of the 2000s! In the story, Alexander Luthor Jr. and Superboy-Prime are on a quest to find Earth-Prime, the perfect Earth. But this would mean the destruction of the 52 universes in the DC multiverse.

Now, the heroes must stop the villains’ raving plans before it is too late. Witness the fateful battle of the DC Universe against Superboy-Prime!

THE BATTLES THAT SOLD THE STORY ARC

On New Earth, Superboy-Prime returns from the Speed Force with a solar-collecting armor to help Alexander Luthor Jr. Now, the battle is on to destroy Luthor’s tower: The JLA, the Titans, the JSA band together in the Arctic.

Nonetheless, the battle was only beginning. In Infinite Crisis (2006) #7, Superboy-Prime decides to fly into Oa, the center of the DC multiverse in order to create a Big Bang to recreate the DC universe with him as its only superhero.

And we recommend this comic for its non-stop action. Indeed, buy this comic to witness Superboy-Prime go through a 300-mile wall of pure willpower created by the Green Lantern Corps.

Certainly, there is the unforgettable battle of the Supermen: Superboy-Prime vs New Earth Superman and Earth-Two Superman. In the end, the comic answered the true meaning of Superman and why his ideal has inspired the DC Universe and fans for generations.

Really, Infinite Crisis #6-7 significantly boosted sales for the Hardcover. Though, it showed how a B-list character like Superboy-Prime can dangerously threaten the DC multiverse in a crisis.

And really, the two Supermen as his Quality Opponents are around Cosmic Being Level who can defeat cosmic beings and even skyfathers.

However, Superboy-Prime’s formidability is limited by his Morals. Though his solar-collecting armor does not protect him from Space Objects such as a red sun.

At the same time, he was eventually defeated not simply by red solar radiation since he managed to kill a depowered Earth-Two Superman but by his Superman complex and his inability to understand the evolution of New Earth.

During the comic, Superboy-Prime faces the two Supermen, the JLA, JSA, the Titans and the Green Lantern Corps. Though SBP properly ranks as Skyfather.

Since its initial release, Infinite Crisis has remained very popular among fans. Recently, SBP resurfaced in Dark Nights: Death Metal as Wonder Woman prepared for battle against The Batman Who Laughs.

Definitely, collect this dramatic crisis in single issues or paperback in comic format.

0 thoughts on “The Best Sellers List: The DCU Battle Against Superboy-Prime Was The Explosive Finish Of ‘Infinite Crisis’”

Celebrating Comic-Con in San Diego or New York to entertain yourself and why Superman is the most popular superhero? Buy Man of Steel Adult Costume Superman Jumpsuit Cloak Full Set for Halloween Carnival Party to gear up with the best cosplay and fight Zod-level villains! You can add it to your collection as a memorable piece of American culture.