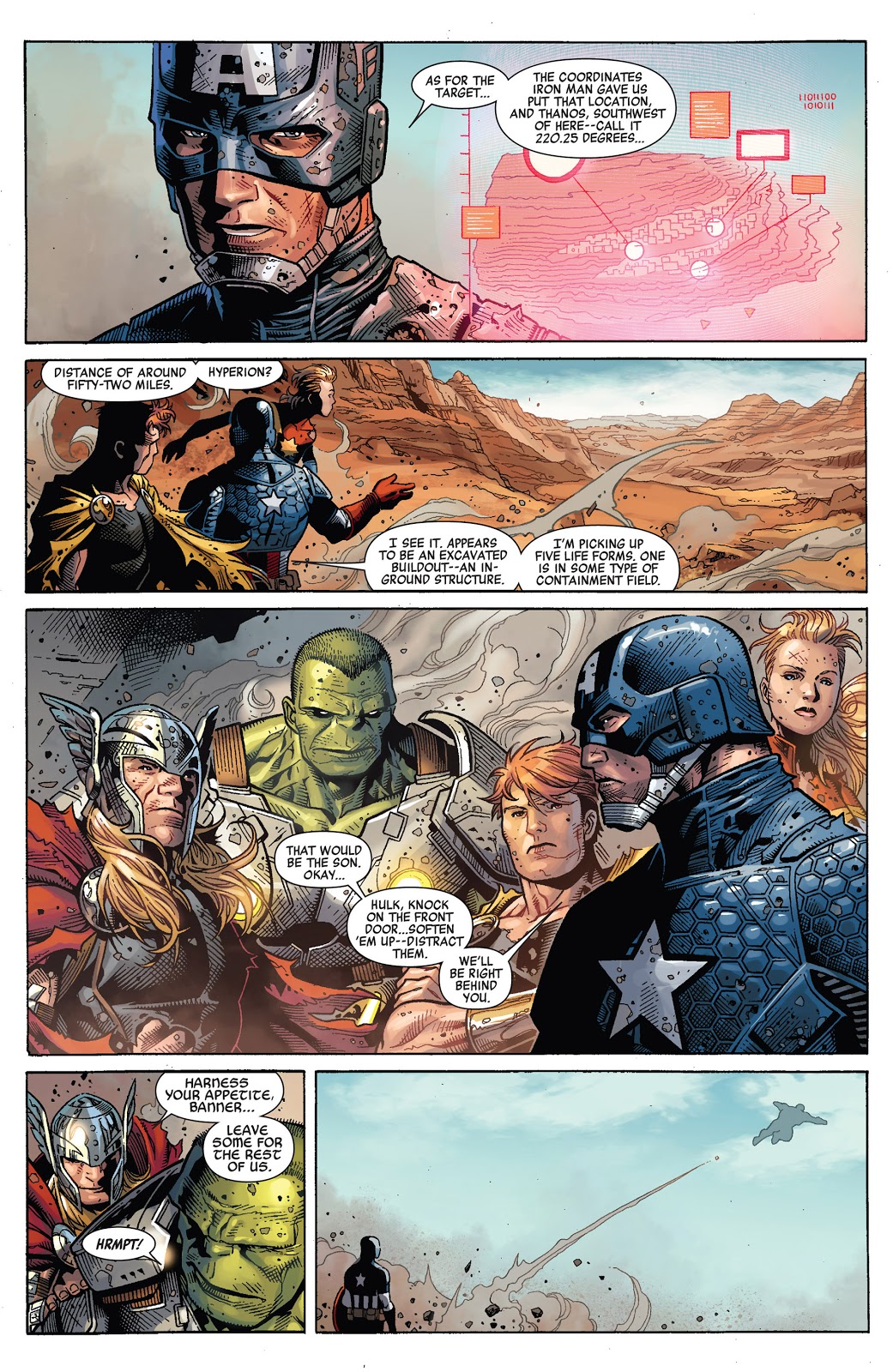 IN ‘INFINITY’, THANOS PREPARES THE ALIEN INVASION OF EARTH

In ‘Infinity’ (2013) #1, Thanos and his army set out to conquer Earth in an alien invasion. The Builders, the universe’s oldest race, have destroyed planets they deem unfit for life. They have destroyed Earth-13761 and are headed for Earth-616. Learning of the threat from Captain Universe, the Avengers leave Earth to face the Builders. In the Avengers’ absence, Thanos and his army send Outrider in order to gather intel about Earth.

Outrider searches through Avengers Tower and Jean Grey’s School for Higher Learning. Outrider arrives at Attilan and attempts to read through Black Bolt’s memory only to wake him up. Badly beaten, it notifies Thanos that the Avengers have left Earth and is given the reward-death. Thanos and his army prepare to invade Earth.

In ‘Infinity’ (2013) #2, Thanos’ army invades Earth though there is some resistance. During the alien invasion, the Black Order confronts the Illuminati for intel about the Infinity Gems.

The Illuminati are a secret organization on Earth that shared information and strategy to solve crises. Their members were: Mister Fantastic, Iron Man, Black Panther, Professor X, Doctor Strange, Black Bolt and Namor.

Black Panther managed to force Black Dwarf to withdraw, while Doctor Strange was embarked in a mental fight against Ebony Maw. Beast and the X-Men fought Corvus Glaive and Supergiant. Proxima Midnight confronted Namor in the ruins of an Atlantis where its inhabitants were annihilated by an attack from Wakanda, part of a conflict caused by Namor’s attack on Wakanda during the conflict between the Avengers and the X-Men. However, the Black Order left their different locations as soon as they discovered the Illuminati didn’t have the Infinity Gems.

Black Bolt was visited by Corvus Glaive to demand a tribute to Thanos: the head of Inhuman youngsters between ages 16 and 22 or face the annihilation of Earth’s inhabitants. He is given one day to decide.

Black Bolt used the Inhuman Codex to discover that the tribute was a cover for Thanos’ true quest for the alien invasion: to kill his Inhuman descendant son whose identity and location are unknown to him.

CHECK OUT THE STORY: DOCTOR DOOM SETS THE TRAP AND STEALS THE SILVER SURFER’S POWER COSMIC.

In ‘Infinity’ (2013) #3, Thanos faces Black Bolt in combat. During the battle, the Inhuman city of Attilan is destroyed. However, Black Bolt managed to activate the Terrigen Mists which are mutagenic vapors arising from the Terrigen Crystals that cause Terrigenesis by activating latent genes in Inhuman descendants and develop super powers.

As the heroes continued the fight against Thanos’ alien invasion, the Illuminati set out to locate Thanos’ son, Thane at multiple locations on Earth. In ‘Infinity (2013) #5’ Thane undergoes Terrigenesis. Ebony Maw locates him in the Inhuman city of Orollan in Greenland. Ebony Maw poses as an ally and offers Thane a containment armor then imprisons him in a containment field. He alerts Thanos.

THANOS TAKES ON THE AVENGERS

During the battle, Captain America is injured by Proxima Midnight’s spear. The ricochets from Captain America’s shield injure Corvus Glaive who gets reduced to ashes by Hyperion’s atomic vision. Thanos takes down Captain Marvel with a punch, and Thor with a cosmic blast. Then, Ebony Maw double crosses him as Thane imprisons Thanos in a cube of “living death” ending the alien invasion and proving that only the strong survive.

In ‘Infinity #4’, Thane’s Inhuman latent genes are activated by the Terrigen Mists.

How do fans feel about Thanos’ quest on Earth? Sound off in the comments.

8 thoughts on “Marvel Day: In An Alien Invasion, Thanos And His Army Battle Earth In Marvel’s ‘Infinity’”