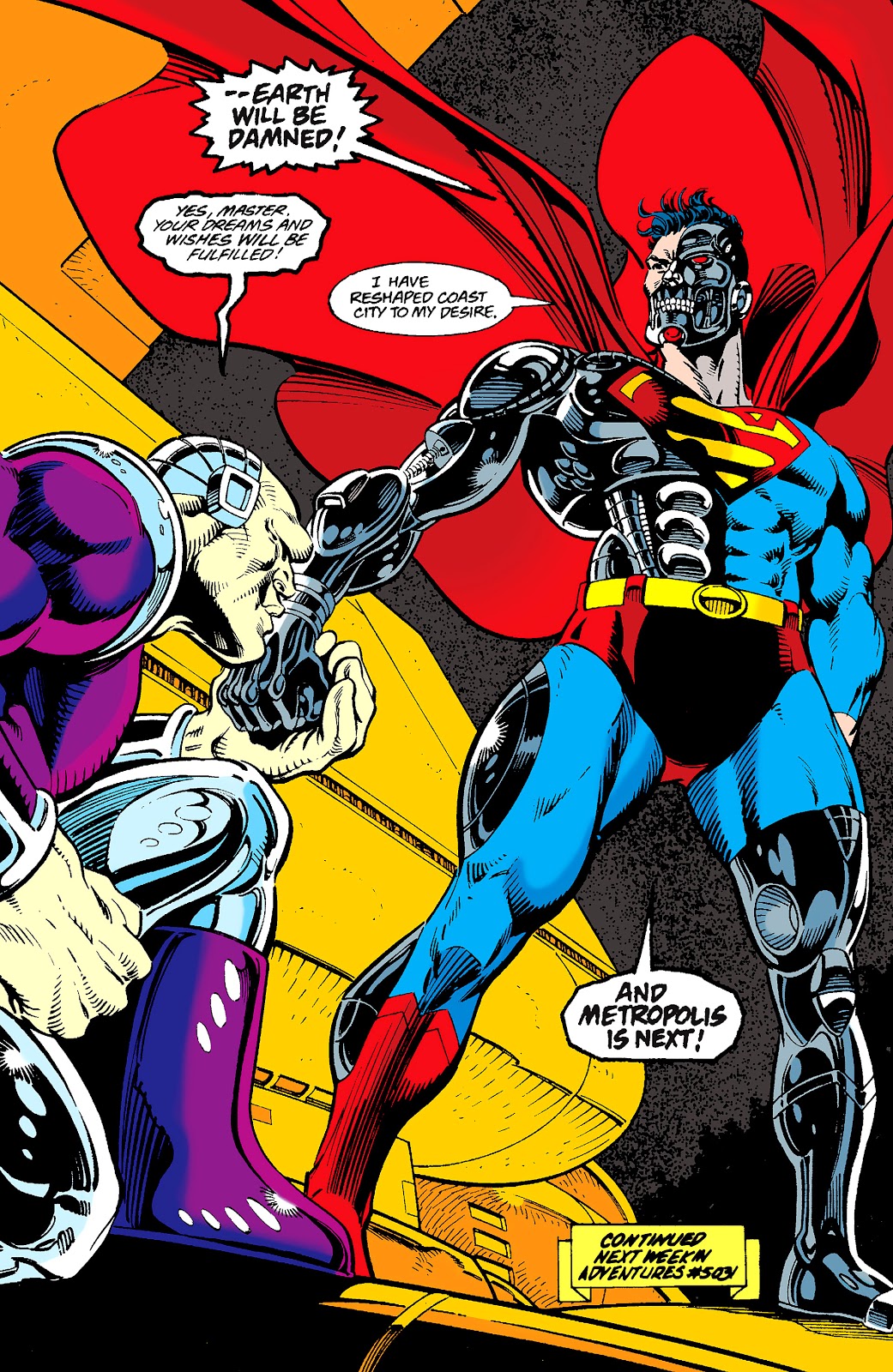 ‘REIGN OF THE SUPERMEN’

During the ‘Reign of the Supermen storyline, Cyborg Superman destroys Coast City with Mongul’s help. Steel, Superboy, Eradicator and Cyborg Superman emerge as Superman replacements during Superman’s absence. Steel appears first. John Henry Irons witnessed a murder of one of the children he was trying to protect on the streets of Metropolis.

John recognizes the Toastmaster weapon used to commit the murder, which he created. Attempting a chase, the murderers evade and John ends up at the hospital. Discharged from the hospital, John recounts how Superman saved him and the promise he made to make his life count. He forges a suit of armor and promises to get the Toastmaster weapons off the streets. He is known as the Man of Steel.

The second Superman to emerge is Superboy.

A group of thugs in a taxicab drive by the Superman memorial statue in Centennial Park and begin shooting at it with their guns. Soon after, they attempt to run down an attractive jogger, but a young boy claiming to be the man of steel intercepts them. Crushing the car, he steals a pair of trendy sunglasses from one of the goons and kisses the would-be victim before flying off.

Meanwhile, the young Superman arrives at the Daily Planet announcing his triumphant return. Lois Lane meets him and is hardly convinced that this is in fact the one, true Superman. This Super-boy begins to flirt with her until he sees a younger reporter, Tana Moon, leaving the Daily Planet building. He introduces himself to Tana and learns that she works for Vincent Edge at WGBS. Tana convinces Superboy to give her a talk-show exclusive interview and he finally broadcasts to the world that he is not the true Superman, but rather his clone. Lex Luthor discovers the news broadcast and summons Project Cadmus administrator, Carl Packard, to his office.

In ‘Action Comics (1993) 687’, the Eradicator is the third Superman to emerge. He emerges in the Fortress of Solitude, confused and shocked. One of the robots who created him, explains he was created by a mobile field effect. The Eradicator watches news footage of Superman’s battle with Doomsday and flies to Metropolis. He enters Superman’s tomb and picks up his cape. As he emerges from the tomb, he is blinded by the light. He flies back to the Fortress of Solitude.

The Eradicator returns to Metropolis and responds to various crimes. Unlike Superman, he is more lethal in dealing with violence. People speculate whether Superman has returned. Later, Lex Luthor discovers that Superman’s body is missing and is furious. Supergirl bursts into his office, furious that he hid news of Superman’s return from her. Meanwhile, the Eradicator saves a plane from crashing earning the people’s admiration. He picks Lois Lane up and they have a private conversation. She notes he has Superman’s memories but his personality is different. She attempts to kiss him, but the Eradicator evades stating only Superman remains, Clark Kent is dead. He is the Last Son Of Krypton.

In ‘Superman’ (1993) #78, Lois Lane investigates Superman sightings. She interviews a scientist who claims to have seen Superman. The man states, Superman removed a train with a cracked container containing nuclear waste in order to prevent contamination. He was able to get a photo of him and shows it to Lois. Lois heads back and turns on her police scanner in the car. She intercepts a police report for Maggie Sawyer’s Unit to report to Star Labs immediately. Superman has been sighted there! Then, Project Cadmus intercepts a bogey headed their way for Zoomway Alpha. They send the Sky Sentinels but the bogey is too fast for them.

The figure breaches the perimeter, and Guardian and security men fire at him at Infra-Vision to kill. The blasts have no effect on him. They turn the lights back on and see Cyborg Superman. He has come for the dead body of Doomsday. Guardian seems to recognize him and Director Westfield vociferously denies his request citing legal bindings. Wasting no time, Cyborg Superman breaks through the underground concrete and uses his robotic right arm to hack the vault where Doomsday is kept. Filled with the memories of Superman, he is terrorized by Doomsday. He manages to bind Doomsday and takes off into space as Lois Lane watches. He is the Man of Tomorrow.

In ‘Superman’ (1993) #80, Eradicator is in Coast City helping put out a fire at Ferris Aircraft Warehouse. When he hears reports of an alien aircraft in Coast City, he decides to stay and investigate. In Metropolis, Cyborg Superman receives a message from the White House of the sighting in Coast City. When he learns that one of the Supermen is in the area, he suggests the impostor may be leading the aliens and departs for Coast City. Aboard the craft, Mongul orders to release the 77,000 carnage globes on the city. With ninety seconds to detonation!

On the other hand, the Eradicator has arrived at the Fortress of Solitude. He is protected by a suit and says he will survive in it. Cyborg Superman is on Warworld. Mongul arrives and asks for forgiveness for being behind schedule. Mongul kneels on his right knee and kisses Cyborg Superman’s right robotic hand. Cyborg Superman states: “And Metropolis is next!”1 Welcome to Warworld!