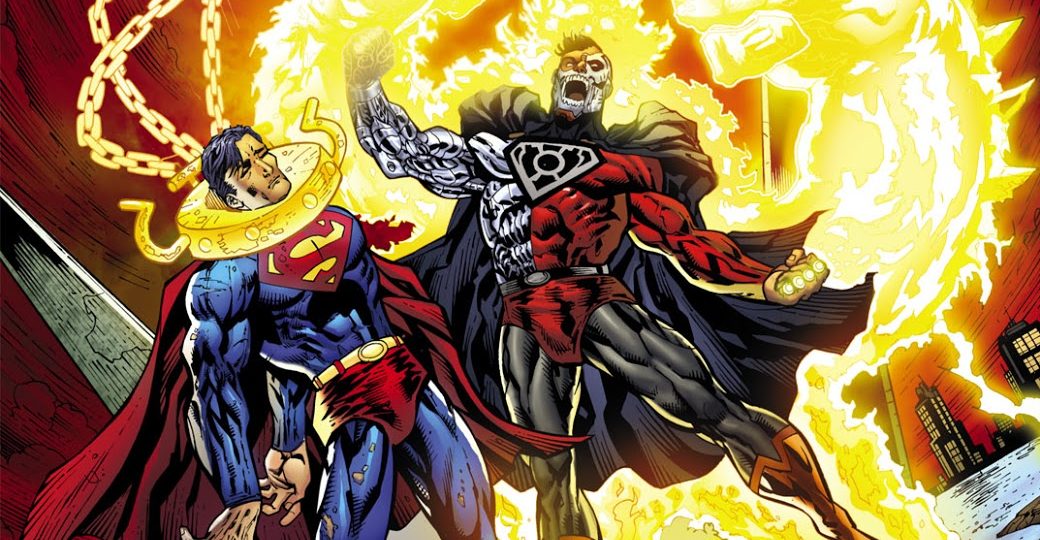 THE FIRST COSTUME WAS THE SUPERMAN COSTUME

In ‘Adventures of Superman’ (1990) #466, Superman fails to save the Excalibur crew. Originally, Cyborg Superman was an astronaut named Hank Henshaw. In fact, he was on the Lexcorp space shuttle called the Excalibur. Namely, the team consisted of Hank, his wife Terri, Steven and Jim Garrison. Caught in an accident caused by cosmic radiation, their bodies were destroyed.

Only their minds survived by creating themselves bodies. Tragically, Steven used pure cosmic radiation whereas Jim used rocks. Meanwhile, Hank’s body was decaying. On the other hand, Terri’s body was disappearing into an alternate dimension. However, Superman failed to save them and all astronauts died, except Terri. Despondently, Superman blamed their accident on his tossing the Eradicator into the sun. But, Terri confirmed their accident occurred before.

CYBORG SUPERMAN, THE MAN OF TOMORROW

In ‘Adventures of Superman’ (1990) #468, Hank survived. Apparently, he transferred his mind into Lexcorp’s mainframe. When he appeared as a robot before Terri, the shock killed her. Strangely, Hank beamed himself onto Superman’s Kryptonian Birthing matrix orbiting Earth. Then, fashioning a space craft, he left Earth to learn about the universe. Soon, Hank would blame Superman for his wife’s death. In ‘Adventures of Superman’ (1990) #500, Cyborg Superman appears in Metropolis. Moreover, he is wearing the Superman costume.

THE SECOND COSTUME WAS ON APOKOLIPS

In ‘Superman/Doomsday: Hunter/Prey,’ Cyborg Superman resurfaces. Previously, at the end of “Reign of the Supermen,” Superman shattered Cyborg Superman’s body. So, he did by vibrating his left hand at an incredible speed. But, the cyborg survived having previously downloaded his consciousness on Doomsday’s back.

In ‘Superman/Doomsday’ #1, Cyborg Superman guides Doomsday’s lifeless body to Apokolips. On course to Apokolips, Captain Slaven encounters an asteroid floating in space. After a scan, there is no sign of organic life form. So, he orders the asteroid into his space freighter. Terrifyingly, the crew realizes it is Doomsday. When they try to dispose of the cargo, it is already too late. Horrifyingly, Doomsday slaughters them.

In ‘Superman/Doomsday’ (1994) #2, Hank Henshaw has a costume upgrade. Finally, Doomsday lands on Apokolips by cargo ship. Immediately, the Ultimate slaughters the Apokoliptian army. In his resurrection, Cyborg Superman rebuilds his Kryptonian body and cybernetic parts. Here, he uses exo-armor from dead Apokoliptian soldiers.

Notably, the exo-armor upgrades Henshaw’s durability. Indeed, Cyborg Superman is able to withstand a full blast of heat vision from Superman. Even Darkseid’s Omega Effect has no effect. But at his peak, the Omega Force destroyed Cyborg Superman. At the end, Darkseid imprisons Cyborg Superman’s consciousness in a Father Box.

CHECK OUT THE STORY: DC Day: Driven Mad By The Destruction Of Coast City, Green Lantern Hal Jordan Gives Into The Darkness And Becomes The Demonic Entity Named Parallax.

A FAN OF THIS STORY? CLICK ON “Green Lantern: Sinestro Corps Special #1” BELOW TO BUY THE KINDLE & COMIXOLOGY COMIC ON AMAZON.

THE THIRD COSTUME WAS THE GRANDMASTER COSTUME

In ‘Green Lantern’ (2007) #22, Cyborg Superman joins the Sinestro Corps. Previously, Henshaw led the Manhunters as Grandmaster. During the battle against the Green Lanterns, most of his organic body was destroyed. Now, the cyborg is being imprisoned on Oa. There, he is being questioned by the Guardians of the Universe. Particularly, about his knowledge of their secret: the 52 parallel universes of the DC multiverse. Surprisingly, the Sinestro Corps attacks the Green Lantern Corps. In addition, Superboy-Prime is freed from his sciencell.

Separately, and Cyborg Superman, they are transported to Qward in the Antimatter universe. After the attack, the Ion entity is ripped from Kyle Rayner’s heart. There, the cyborg is repaired and with them joins the Sinestro Corps. In ‘Tales Of The Sinestro Corps: Cyborg Superman’ (2007), Cyborg Superman finally defeats Superman. Sporting the Grandmaster costume, Henshaw has added durability and strength. And he is amped by the Yellow Lantern ring. Definitely, rocking the costume is one of Cyborg Superman’s best fashion moves.