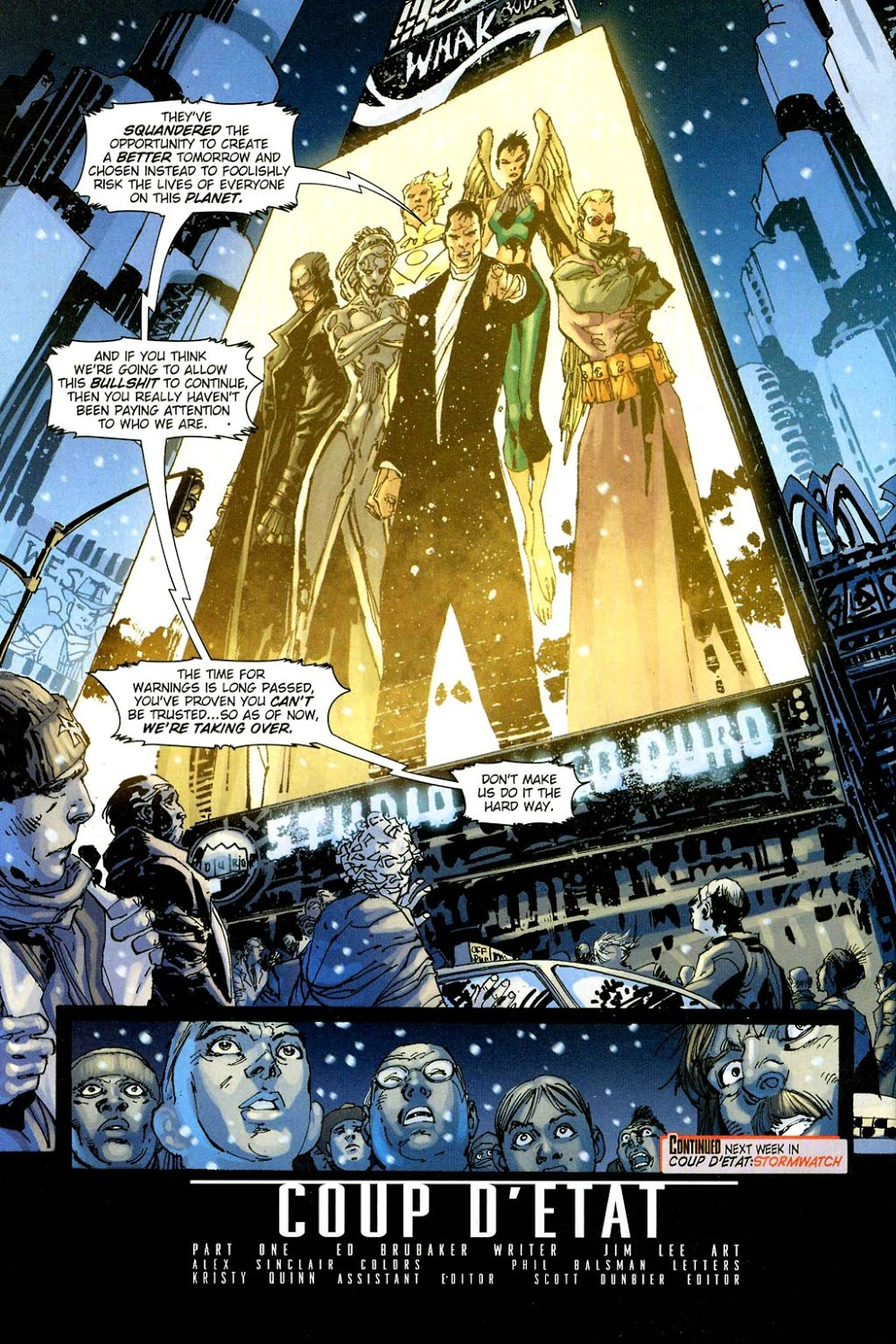 TAO, A FORMER WILDC.a.t.s. AGENT, TRICKS THE U.S. GOVERNMENT INTO TRAVELING TO THE BLEED LEADING TO AN ACCIDENT

In ‘Coup D’Etat: Sleeper’ (2004) #1, the U.S. government follows the conspiracy of Tao in order to conquer the Bleed. Following a mission by Agent Carver and Misery at a secret U.S. base, the U.S. government retrieves a device. In reality, it was an elaborate set-up by Tao, a former WILDC.A.T.s. who orchestrated the covert operation.

Realizing that the device can actually help them travel the Bleed, they send a probe into space. However, per Tao’s knowledge, the device “was powered by a tiny black hole.”1 Upon reaching the Bleed, the black hole became unstable and the probe exploded. The accident tore “open an enormous hole in the Bleed” and destroyed a shiftship.1

THE AUTHORITY TAKES OVER THE U.S. GOVERNMENT AFTER IT CAN’T CONTAIN THE DISASTER IN FLORIDA

In Florida, the Authority are on the scene. Hawksmoor sends telepathic readings of a ship breaching the Bleed. Swift thinks it’s a meteor shower. However, Apollo realizes that it’s not a meteor shower, it’s giants. Swift identifies that it’s a shiftship six times bigger than the Carrier with hundreds of hull breaches.

Its crew are giants falling to the Earth like meteors. Midnighter says they have about 10 minutes until the shiftship lands on Earth, a collision worse than the meteor that extinguished the dinosaurs. The Doctor cannot affect the shiftship with his magic so he stretches out time. The Authority uses doors to evacuate the population of Florida. But that is not enough. The ship hits Florida and millions die.

Florida has been turned into an archipelago with Key West. Aboard the Carrier, the Engineer informs Hawksmoor that the Giants are an extra-dimensional race, from a universe billions older than the Wildstorm universe. They are known as the Vigil and they are the first species to use the Bleed. They collect information and observe the multiverse.

The shiftship was headed for the Gathering, when “all new knowledge is collected to their planet.”1 The Vigil have never gone to war and it is unclear what their response to the catastrophe would be. Later at night, the Authority makes an announcement on a jumbotron, Hawksmoor declares the Authority are going to take over the U.S. government.

SPARTAN WARNS THE AUTHORITY AS TO THE CONSEQUENCES OF THEIR ACTIONS

In ‘Coup D’Etat: Wildcats’ (2004) #1, former WILDC.a.t.s. members intervene in the U.S. government conspiracy. Members of the HALO Corporation, Jack Marlowe (Spartan), Edwin Dolby and Grifter are concerned over recent events. The wheelchair-bound Grifter recruits Edwin Dolby for a mission. Together, they head to a former supervillain, now weapons dealer codenamed Warmaker. Grifter first attempts to woo Warmaker in order to retrieve a weapon. Sensing that there is no money involved, but rather an exchange, Warmaker shoots Grifter.

Grifter evades from his wheelchair, and shoots Warmaker in the head, killing him. Then, he calls Dolby and together they head behind the bookcase in Warmaker’s study. They find a massive negative gamma particle. Grifter tells Jack his plan: He plans to have Jack teleport the WMD into the Bleed to trigger a singularity and send the Authority to a parallel universe. Jack does not agree to Grifter’s plan and says the Authority’s conspiracy is likely temporary. Later, Jack appears on the Authority’s carrier in hologram form. They have an argument and taking the form of Spartan, he warns them of the consequences of their actions.

CHECK OUT THE STORY: IN THE ‘ARMAGEDDON’ STORYLINE, THE WILDC.A.T.s. RESCUE CAPTAIN ATOM STRANDED IN THE DC MULTIVERSE FROM THE WORLDSTORM.

WITH CONTROL OF THE U.S. GOVERNMENT, THE AUTHORITY FACES AN ALIEN INVASION BY THE VIGIL

Suddenly, the Vigil invade Earth. Hawksmoor orders the Carrier to start teleporting people out of Times Square similarly to the procedure in Florida. Hawksmoor, Apollo and Engineer head to Times Square, the Doctor heads to the White House and Midnighter has to negotiate the President’s resignation. The Authority arrive in Times Square and do battle. Apollo flies through the Vigil “faster than a speeding bullet.”2 Hawksmoor negotiates the Vigil’s surrender. Finally, the whole team is teleported aboard the Carrier with the President.

They are showing video footage of the President’s attempt to conquer the Bleed. The Vigil comment on humanity’s potential for destruction and state they have not engaged in combat in 500 Earth years. The Engineer informs the Vigil that the Authority downloaded 60% of their shiftship’s data before it was destroyed. Asked what can prevent humanity from being a threat to the multiverse, Apollo incinerates President Kent with his heat vision. The Vigil calls the Authority “savages.” Then, they depart for the Bleed.

Swift remarks that President Kent was actually manipulated by outside forces. The Engineer says she manipulated the footage to place guilt on President Kent in order to ensure that the Vigil would stop their invasion of Earth and leave. Swift questions the decision and states that the Authority never compromises. At night, Hawksmoor proclaims the Authority as the new U.S. government. His first order of the day is to suspend democratic elections. After the broadcast, Midnighter asks what they do next.

4 thoughts on “DC Day: In “Coup D’Etat”, The Authority Finally Takes Over The U.S. Government Because Of Their Conspiracy To Conquer The Bleed”