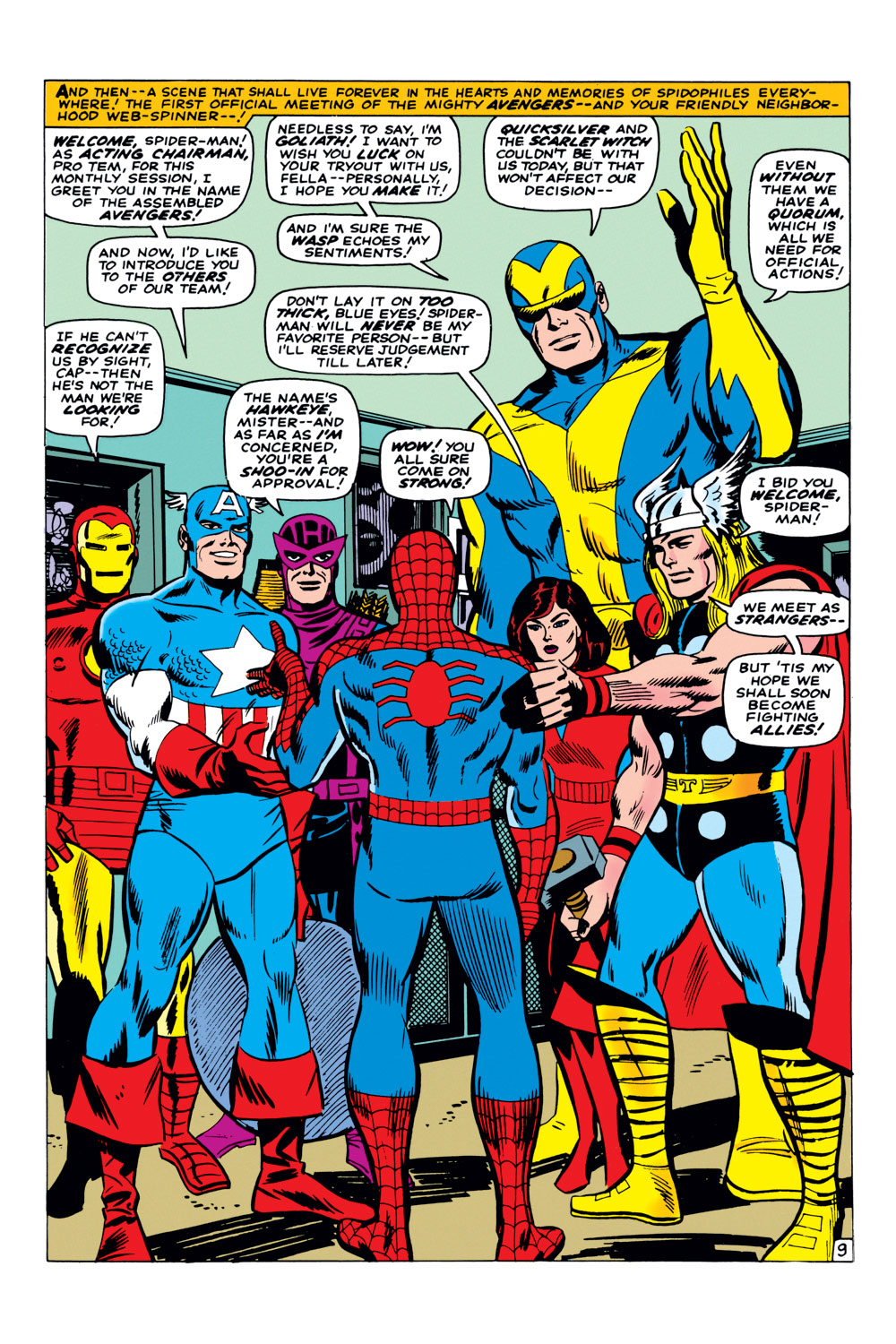 IN TEAM-UPS AND CROSSOVERS

THE AVENGERS WANT TO RECRUIT SPIDER-MAN

In ‘Amazing Spider-Man Annual’ (1966) #3, Spider-Man embarks on a comedic adventure in order to join the Avengers. In the opening pages, the Avengers debate whether to offer him membership. Hawkeye is immediately elated, while the other members find Spider-Man to be “an unknown quantity” and Wasp does not like Spider-Man.1 In order to conduct the meeting, Thor commands for there to be an acting chairman. The acting chairman is Captain America.

The Avengers decide to learn more about Spider-Man. Hawkeye proposes to consult Daredevil. Captain America says he is “hyper-sensitive to sounds and impulses.”1 Captain America and Goliath work on sending high-frequency radio signals. Daredevil soon arrives at Avengers Mansion. He gives Spider-Man the highest recommendation stating that in his recent battle with the web-slinger, Spider-Man “was stronger, and more skillful than ever!”1 Thor, Iron Man and Hawkeye soon depart to contact Spider-Man.

Unfortunately, Spider-Man is hot-tempered and Hawkeye is loud-mouthed. And when Iron Man attempts to silence Spider-Man, Spider-Man gets upset by his concern about Aunt May. He starts thinking that the test is the Avengers want him to get mad.

SPIDER-MAN IS UP TO THE TEST AND STAGGERS THE HULK

A battle ensues where Spider-Man uses a combination of spider-speed and spider-strength to fight the Hulk. By accident, Hulk attempting to land a punch on Spider-Man, who evades, breaks the Gamma Ray Shielding Wall. This results into Hulk changing back into Dr. Bruce Banner. During their conversation, Spider-Man realizes Dr. Bruce Banner needs help not punishment and begins to question the Avengers. As Dr. Banner begins to change into Hulk, he tells Spider-Man he doesn’t reach his full strength “for first few minutes.”1 Sensing an opportunity, Spider-Man staggers the Hulk with a punch before he reaches full strength.

CHECK OUT THE STORY: Does It Get Any Worse? Captain America Is Shot Four Times At The End Of The Civil War.

Good ol’ Spider luck, failing him again! Spider-Man returns to the Avengers’ Mansion and resigns from their membership offer. He tells the Avengers he could not find the Hulk. After Spider-Man departs, the Avengers are disappointed and have mixed feelings. Captain America says the Avengers actually wanted to help Hulk.

3 thoughts on “Marvel Day: In A Comedic Adventure, Spider-Man’s Luck Strikes Out As The Avengers Attempt To Recruit The Web-Slinger Into The Team”