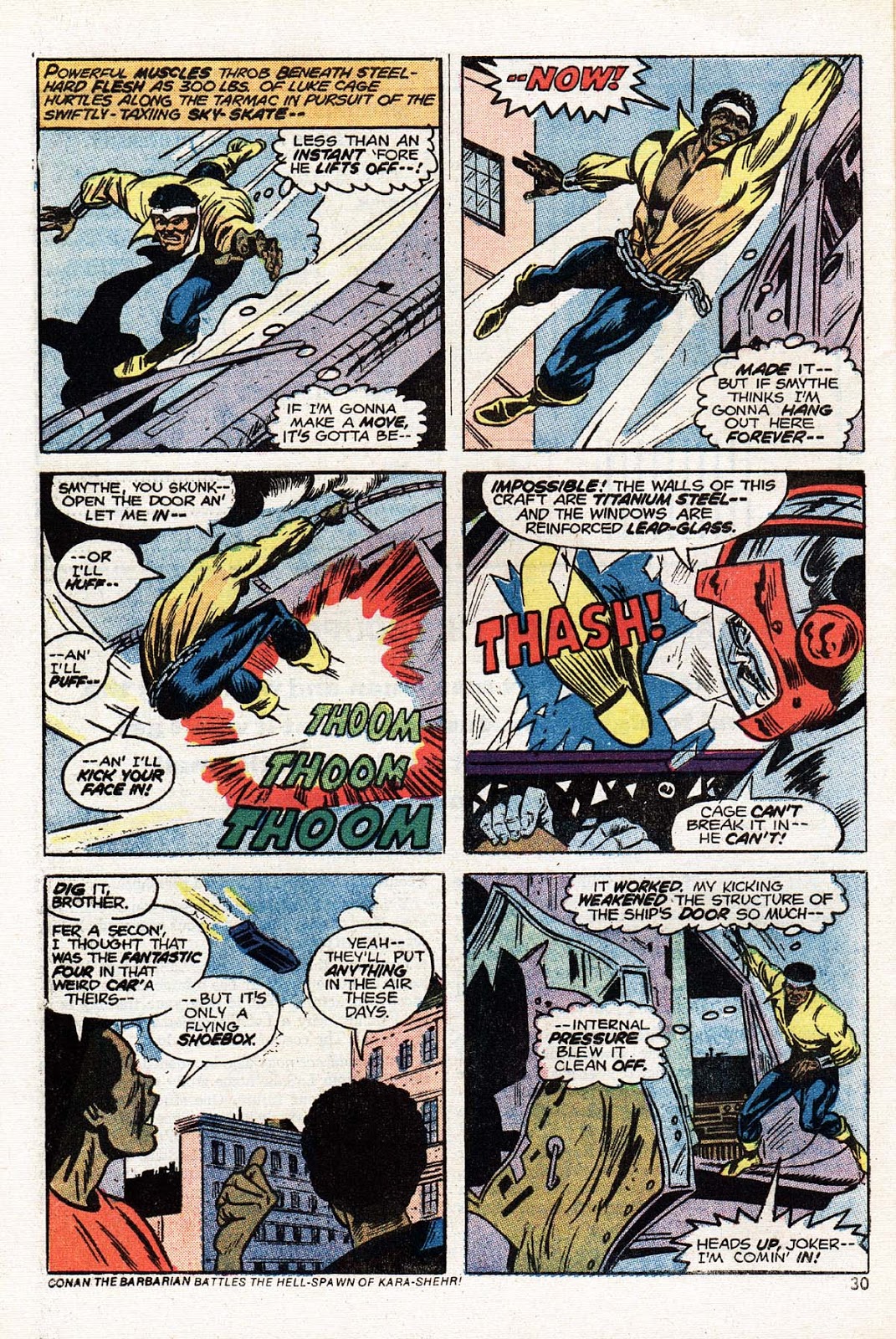 IN AN ORIGIN STORY FOR AN EX-CON, LUKE CAGE SETS UP HERO FOR HIRE TO START HIS CRIME-FIGHTING CAREER

In ‘Hero For Hire’ (1972) #1, the origin story of the ex-con Lucas Cage is told before he became Power Man. Luke Cage and Willis Stryker were gang members in Harlem. They were involved in crimes and were fugitives from the law. Over time, Willis became a knife specialist, while Lucas was a brawler. Tired of running, Lucas tried to reform until a girl named Reva came along. Lucas and Willis both competed for her attention. The wealthier Willis who had ascended among the gangs of New York, was able to win Reva’s favors for a while until one night when he was beaten by two members of the Syndicate mafia for cutting onto their turf.

Reva escaped and alerted Lucas who was nearby. Lucas beat up the two men then took Willis to the hospital. Reva told Lucas on the way that she feared her company with Willis. Upon hearing Reva’s comments, at the hospital, Willis broke up with both Reva and Willis. From that time, Lucas and Reva entered into a serious relationship that was leading to marriage. Watching over the couple, Willis set up Lucas, planted drugs at his apartment and tipped off the police. Lucas was then sentenced to prison for a crime he did not commit. Re-kindling her connection to Willis, Reva was then shot by the Syndicate. Willis survived the attack.

This is the story Lucas Cage told Dr. Burnstein before he would become Power Man. One year ago, Lucas Cage had been transferred to Seagate Prison for his crime. Lucas had a violent temper and wanted revenge on Willis for his set-up. He was confined to solitary and got into fights. His plan was to be the first to escape Seagate Prison which was known as “Little Alcatraz.”1 When the prison came under new management, Lucas was offered an opportunity that would forever change his life.

He was contacted by a scientist called Dr. Burnstein who been given a grant by Tony Stark to pursue research on an electro-biochemical system that would enhance cellular regeneration. Dr. Burnstein said Lucas was uniquely qualified for the project for being one of the strongest and healthiest inmates. Seeing it as a chance to get on parole for volunteering in the research project, Lucas eventually accepted. During the initial trial, Lucas tolerated it well. However, one of the prison guards, Billy Bob Rackham saw it as an opportunity to kill Lucas. Increasing the dials to dangerous levels.

Amazingly, Lucas survived the process and on busting out of the machine, he accidentally knocked out Rackham. Realizing his enhanced strength and bulletproof skin, Lucas eventually escaped Seagate Prison. The guards who intercepted him on the way out, finding his clothing on the shore assumed him dead.

Lucas eventually made his way back to New York with a boat he found. On the street, looking for money he stopped a robbery while being bulletproof. The store congratulated him and offered him a reward with an advice to buy clothing to start his superhero career. Lucas started Hero For Hire and took on the name Luke Cage.

WORKING AS A MERCENARY, LUKE CAGE THEN BEATS DOWN ON DOOM FOR NOT PAYING HIS $200

In ‘Hero For Hire’ (1972) #8, Doctor Doom sends an emissary at Hero For Hire. The man hires Luke Cage and offers to pay him $200 a day to capture four men at Bedford-Stuyvesant who have secrets about an unknown company.

Luke heads to the place, investigates and finds the men. He ends up finding them and finds out that the men are robots. Later, he traces his client’s address to the Embassy of Latveria. Going through the security detail, he finds the man only to be stopped by… Doctor Doom! Doom has a job proposition for Luke Cage. Find out in the next issue, why Luke beats down on Doctor Doom.

A FAN OF THIS BATTLE? CLICK ON “LUKE CAGE, HERO FOR HIRE” BELOW TO PURCHASE THE COMIC ON AMAZON.

In ‘Power Man’ (1974) #17, Luke Cage celebrates Black Power and becomes Power Man. Frustrated by the lack of news coverage for his heroics, Luke Cage wants to take Hero For Hire to the next level. Fortunately, Luke’s luck may have just turned out. Mr. Orville Smith, who works for Stark Industries communicates to Luke Cage Mr. Stark’s need for the hero to steal his new deep-space exploration suit. However, Luke is not convinced and is ready to throw Orville out but when he sees a personal check from Tony Stark, he changes his mind. The theft is meant to test the factory’s new security system. Only Luke, Orville and Mr. Stark are said to be aware of the test, not even Stark’s personal bodyguard, Iron Man, is in the know.

On the outskirts of Long Island, at night, Luke hitches a ride to Stark Industries on a van. He soon gets past the perimeter and looks up the map Smythe gave him. Moving through corridors he finally reaches the Astrophysics Lab. Seeing two security guards he quickly dispatches them. This causes a whole security unit to rush to the area. Tony Stark, in his office, sees the commotion. Sensing that the space suit is in danger, he changes into Iron Man. Before Luke Cage can leave with the suit, Iron Man intercepts him. The fight is on. Soon, Iron Man is impressed by Cage’s strength and toughness. When Luke damages his suit, “..the kid gloves are OFF!”2

What follows is a flurry of punches that knock the wind out of Luke Cage. Iron Man is about to land one final punch though Luke is still standing. Seeing how tough Iron Man is, Luke Cage decides that the Stark Industries’ test is successful. Iron Man retorts that Stark hired Luke for a test and that he did not know about it. Luke reveals he was hired by Orville Smythe. Iron Man claims he knows every executive on Stark’s payroll and both realized it was a set-up. The real plan was for Luke Cage to serve as a diversion while Orville stole the star-suit. The two superheroes race in the complex and find Orville attending to make his exit with one of the experimental sky-skates. During the battle, Luke damaged Iron Man’s armor so his boot-jets are not working.

Heroically, Luke Cage jumps onto the sky-skates. The ship takes to the air with Luke holding onto it. Barreling through the ship’s door, Luke enters and tussles with Orville in the star-suit. Luke comments the star-suit has the power of a cannon and might kill him. Damaging the star-suit’s circuitry, Luke Cage kicks Orville outside the ship with Orville, unable to fly, crashing down. As the ship is crashing down, Luke Cage gets on com and notifies Iron Man of his predicament. Following Iron Man’s instructions, he is able to put it on remote control. In the end, Luke Cage rips the forged check and asks Iron Man to compensate him for his time.

CHECK OUT THE STORY: In “Tower Of Babel”, Ra’s Al Ghul Uses Batman’s Mad Science To Take Out The Justice League Of America.