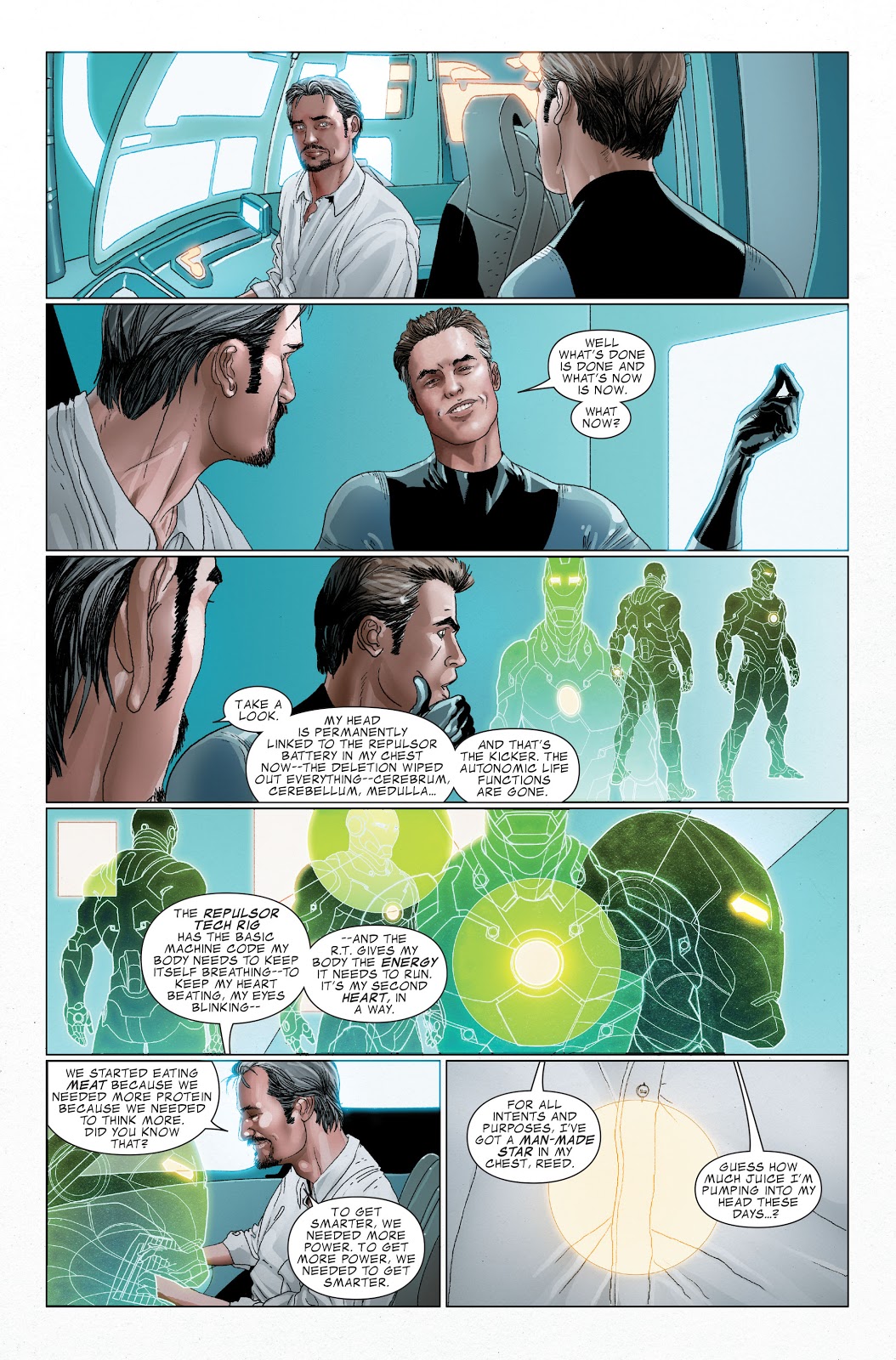 Iron Man is one of the smartest beings in the Marvel Universe. He regularly comes up with advanced technology, battle plans, scientific discoveries and yes… Iron Man Hulkbuster Armors. In order to estimate how intelligent Iron Man may be, let’s look at an Iron Man Armor upgrade: The Bleeding Edge Armor.

Deemed as “bleeding edge,” this armor was created as Tony Stark essentially reinvented himself and the armor. Being called an upgrade to Extremis by Mr. Fantastic, Tony Stark corrected this comment by saying, “Nah – this is what comes next.” It was the first armor powered entirely by repulsor technology via Stark’s new device, the R.T. node.

This entire armor is kept inside Tony’s body until mentally commanded, at which point it manifests itself as the Iron Man Armor. The armor is made up of Nano-Machines that can now be commanded to turn into any type of structure upon Stark’s skin. For example, the nano-machines can turn into clothes, other armors, or even different beings completely, by having the nano-machines change their properties into whatever Stark wants them to be. It can also dissociate to transform into the Iron Man armor whenever Stark wishes. The armor and Stark’s own transhuman body are powered by the high-yield R.T. node mounted in his chest. The high output of the node has greatly augmented Stark’s intelligence and provided him with superhuman-level multitasking and learning capabilities.

The R.T. node is Iron Man’s discovery of fusion power, which is the process that powers the sun. In effect, Iron Man called the Bleeding Edge Armor a “man-made star.”1

The Repulsor Tech node, as called on Earth-616, is a type of fusion power which derived from the Repulsor Technology of the Iron Man suit created by Tony Stark. It can be used as a source for clean energy as well as a powerful bomb, further modifications made along Rand Industries discarding the second possible application.

Tony Stark discovered a source of clean energy as well as the potential to make powerful thermonuclear bombs.

HOW STRONG IS THE BLEEDING EDGE ARMOR?

IN ‘AVX:VS’ #1, IRON MAN IN BLEEDING EDGE ARMOR GOES TOE TO TOE WITH MAGNETO WHO WAS SIPHONING THE MAGNETIC ENERGY OF NEARBY PLANETS

A FAN OF IRON MAN? CLICK ON Invincible Iron Man Vol. 5: Stark Resilient, Book 1 BELOW TO BUY THE HARDCOVER COMIC.

HOW SMART IS IRON MAN?

Iron Man’s IQ has been rated as super-genius, with the likes of beings like Thanos. Ben Sherlock from CBR.com writes:

Lex Luthor’s IQ is estimated to be 225, which is very impressive. Batman’s is 192, while Albert Einstein’s is thought to be between 160 and 180. So, Batman has a higher IQ than Albert Einstein, but Lex Luthor has a higher IQ than Batman. However, compare Lex’s to Tony Stark’s, which is 270, and it doesn’t seem so impressive. Tony’s IQ of 270 is extremely high. It makes him certifiably a “super genius” and puts him in the smartest 0.1% of the world’s population. 225 is still an incredible IQ score, but it’s not in the top 0.1% of the world.

Iron Man mastered the fusion process that powers the solar nuclear reactor. This is revolutionary in the sense that it promises to create clean energy that can power human industry. Iron Man built a Bleeding Edge Iron Man and is capable of at least creating a statistical model of the lifetime of a star from its beginning stages to supernova. Furthermore, Iron Man is able to apply theory to physics and engineering.

The Bleeding Edge Iron Man Armor achieves two things: fusion power and nano-technology. Because Iron Man realized these feats of engineering, his creative intelligence is at least intelligent enough to process all the information on the Internet since this is the technology that connects the entirety of Marvel Earth.

For more information on the Intelligence Scale, visit the Power Level Wiki page.

8 thoughts on “Super Power Explained: How Smart Is Iron Man?”