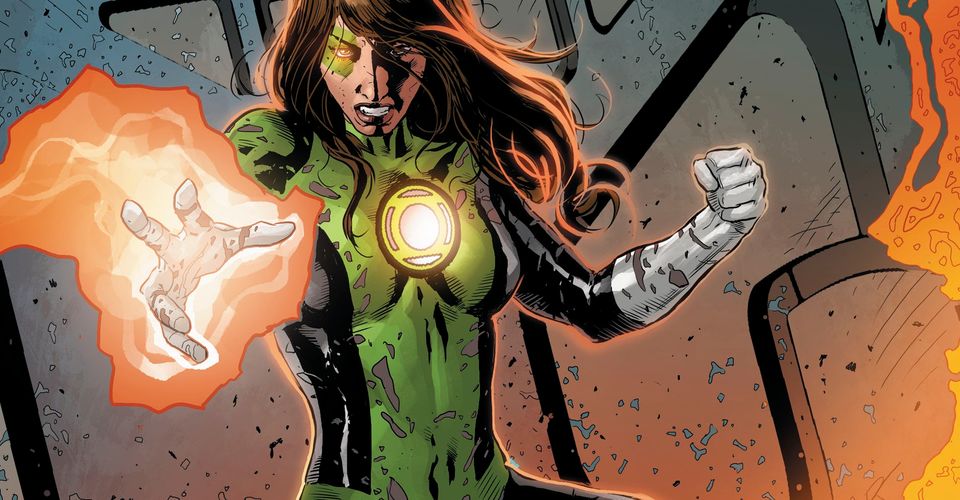 NEW 52: JESSICA CRUZ DEVELOPED PTSD FROM AN ATTACK BY MOBSTERS

In ‘Justice League’ (2014) #31, Jessica Cruz becomes the new Power Ring. Four years ago, Jessica and her friends went on a hunting trip. On the way, they stumbled upon mobsters who were burying a body. Murderously, they decided to not leave witnesses and shot Jessica’s friends. Incredibly, Jessica managed to escape. Consequently, the young girl developed anxiety and PTSD from her trauma. As a result, she has locked herself in her room for four years.

Sinisterly, the Ring of Volthoom has revealed these things to her. Upon the death of Harold Jordan of the Crime Syndicate, the Ring has chosen her as its new host. In fact, her fear attracted it to her, a weapon it can use for destruction. When Jessica shoots the Ring with a shotgun, it only becomes angrier. Violently, the Ring forces itself upon her finger. Later, in control, Jessica realizes she needs help. Fortunately, the Doom Patrol offers to help.

Unfortunately, proximity to the Crime Syndicate causes Jessica to lose control and for the ring to possess her body and mind. Then, Jessica becomes Volthoom. Nevertheless, when Cyborg attempts to override the ring, Volthoom activates the Grid virus. In ‘Justice League’ (2016) #49, Jessica’s mind is trapped inside the Ring of Volthoom. Previously, at Belle Reve, Cyborg downloaded his consciousness into the ring as a contingency plan to help Jessica.

Fortunately, Cyborg manages to hack the tech in time for Jessica to save Flash from the Black Racer in one second. Seemingly, Jessica is killed by the Black Racer. In reality, we learn Black Racer has claimed the life of Volthoom. For her ability to overcome great fear, Jessica is chosen as Sector 2814’s new Green Lantern.

REBIRTH: DURING JUSTICE LEAGUE: ODYSSEY, JESSICA CRUZ DIES AND IS RESURRECTED AS AN OMEGA LANTERN

Slowly, he manipulated Hypertime to assemble the Justice League Odyssey and build Sepulkore. Using Starfire to activate the station, Darkseid soon returns to full power. While Cyborg, Starfire and Azrael have been converted into New Gods, only Jessica Cruz opposes Darkseid’s return. At four percent ring power, Jessica delivers Darkseid a devastating punch. Powerfully, Darkseid responds with a backhand that leaves Jessica on the floor, close to death. With one final blast of his Omega Effect, Darkseid reduces the Green Lantern to ashes and bones. In ‘Justice League Odyssey’ (2019) #13, the Omega Effect resurrects Jessica as an Omega Lantern.

A FAN OF THE REST OF THIS STORY? CLICK ON “Justice League Odyssey (2018-) (4 book series)” BELOW TO BUY the Kindle comic.

2 thoughts on “DC Day: The Evolution Of Green Lantern Jessica Cruz From New 52 Into Rebirth”