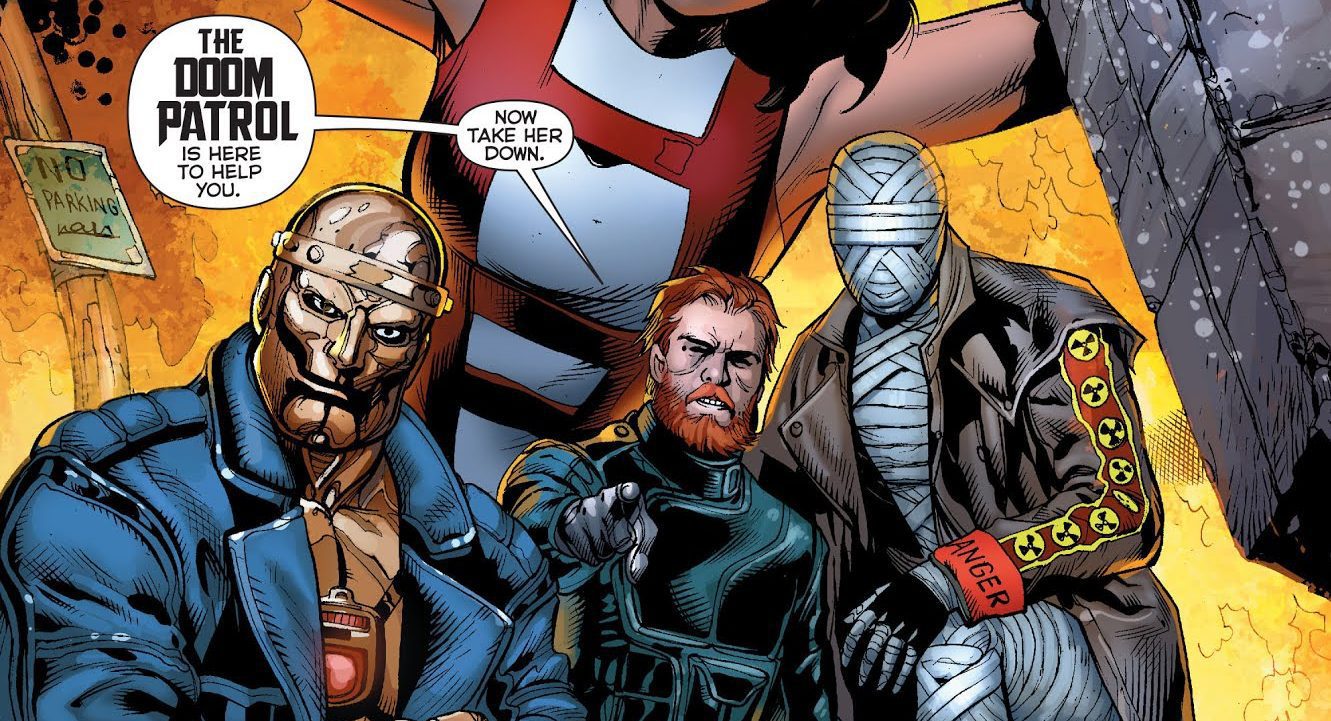 Previously, Jessica Cruz was chosen by the Ring of Volthoom. After the demise of the Criime Syndicate, the Ring wanted her as the new Power Ring. Elsewhere, at Wayne Manor, Lex Luthor confronts Bruce Wayne. Finally, he has deduced that Bruce Wayne is Batman. Before Lex can continue his accusations, Alfred mounts his gun at the criminal’s temple. Quickly, Bruce knocks Lex down. When Lex notices a clock on the wall, he blows it.

Then, the passage to the Batcave appears behind the rubble. In reality, the billionnaire has come to join forces with the Batman. In fact, he believes a threat is coming to Earth. After Batman tells him a modified tale of the scorpion and the frog, Lex departs. Suddenly, Superman and Wonder Woman alert Bruce. In Oregon, a green energy detonation has been detected. Fortunately, the Doom Patrol arrive to help.

In Justice League (2014) #33, the Doom Patrol and the Justice League fight. Previously, the Doom Patrol had come to recruit Jessica Cruz. When her powers are out of control, they elect drastic measures. Heroically, Luthor arrives to save the day. In fact, he threatens to blow Chief’s spine out. Meanwhile, the Ring reveals why he chose Jessica. As matter of fact, she is the lone survivor from a murder attempt by two gunmen in the woods. When Jessica realizes it, a big explosion follows.

Strangely, the detonation reaches to Anti-Monitor. Sinisterly, she tells him of Prime Earth. Dangerously, the cosmic being promises to “consume it.”1 As the fight rages, Lex tells Batman his plan. As matter of fact, the Ring of Volthoom works like a power ring: indeed, it works on emotion. If Luthor can use shock therapy on Jessica’s synapses, he can severe her emotional connection. Drastically, Chief favors psycho-surgery, an euphemism for lobotomy.

CHECK OUT THE STORY: THE EVOLUTION OF GREEN LANTERN JESSICA CRUZ FROM NEW 52 INTO REBIRTH.

A FAN OF THIS STORY? CLICK ON Justice League Vol. 6: Injustice League (The New 52)  BELOW TO BUY THE PAPERBACK ON AMAZON.

But Batman saves the day. Courageously, he reaches out to within Jessica’s energy field. Honestly, he tells her he too is a victim. In addition, she should face her fear. Instead of fearing the darkness, she should embrace it. Reassuringly, Jessica takes Batman’s hand. Together, they summon their wills and Jessica manages to extinguish the Ring of Volthoom’s blast. Finally, Batman tells Lex they never needed him to save the day.

In fact, the Justice League held the Doom Patrol back for Batman, not Luthor. Sternly, Lex replies: “But you will.”1 Later, Batman advises Superman and Wonder Woman to recruit Lex Luthor. For two reasons: In order to keep him in check and investigate Lexcorp. Though Superman opposes revealing their secret identities. Eventually, Superman formally welcomes Lex Luthor into the Justice League. To end, he lays down some ground rules.

4 thoughts on “DC Day: Scheming To Recruit Jessica Cruz, The Doom Patrol Attempted To Lobotomize Her”