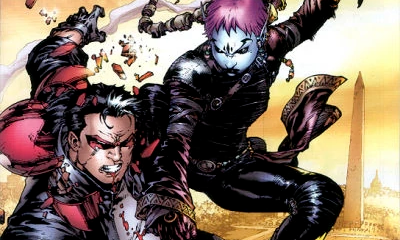 Meanwhile, the Monitors unravel the causes that threaten the 52 universes of the multiverse lying in the multiversal anomalies. One of them, is Black Canary. Let’s reveal her origin story in the Post-Crisis continuity.

In Countdown (2007) #46, the Monitors reveal the origin story of the first Black Canary. Originally, she was from Earth-Two. After retiring from crime, Dinah Drake began her crime-fighting career. Soon, she joined the Justice Society of America. After the death of her husband, Larry Lance, she migrated to Earth-One.

In Justice League of America (1963) #21, is the legendary first meeting between the JSA and the JLA. The two super-teams band together to defeat Fiddler, Icicle, Wizard and Chronos, Doctor Alchemy and Felix Faust that threaten the DC multiverse. During the Aquaris crisis, Dinah eventually remained on Earth-One.

PRE-CRISIS: DINAH LANCE IS HER DAUGHTER

On Earth-One, Dinah Laurel Lance was born of the first Black Canary, Dinah Drake and police officer Larry Lance. Precociously, Laurel started her crime-fighting career at the age of 19. Soon, she became the second Black Canary.

In JLA: Year One, Dinah Lance became a founding member of the JLA. Early on, the JLA was an inexperienced and under-funded group that took on alien invasions and corruption.

Celebrating a special occasion on vacation to entertain yourself or a loved one? Click on Hazel & Creme Chocolate Hazelnut Wafer Gift – Gourmet Food Gift – Fathers Day, Sympathy, Birthday, Thank You Gift Basket below to buy the gourmet chocolate on Amazon.