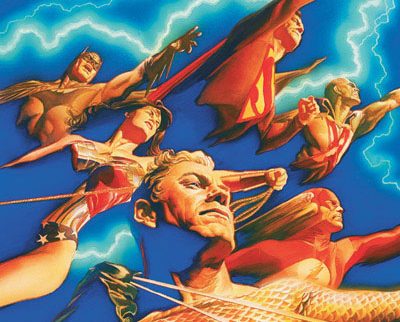 “JLA: Tower Of Babel” is a classic JLA story. Really, it showcased at the time, why the Justice League was DC’s premiere superhero team. True, Superman may function as the first among equals. Though, Batman is revealed to be the most dangerous man on DC Earth.

Certainly, it is a case of Bat-god Syndrome. The main plot of the story is the following: Eco-terrorist Ra’s Al Ghul has hacked Batman’s contingency plans. In his paranoia, the Dark Knight had developed over the years contingency plans. In effect, they were intended to neutralize each member of the Justice League, should they ever go rogue. Of course, when the plans are enacted, disaster ensues.

Mark Waid and Howard Porter collaborate on this timeless story. Without a doubt, what makes it work is the larger-than-life feel of the pencils. Porter’s lines are crisp, athletic and the coloring brings movement to life. The consequences of the story arc lead directly into “JLA: Divided We Fall.”

Overall, this is the best Post-Crisis JLA story. Moreover, Batman fans will geek-out at Bat-god in the loose adaptation Justice League: Doom available on Blu-ray.

INTERESTED IN THIS STORY? CLICK ON “JLA “TOWER OF BABEL” PAPERBACK TPB” BELOW TO PURCHASE THE COMIC ON AMAZON.

In 2004, Brad Meltzer and Rags Morales crafted “Identity Crisis.” To date, no JLA story has been more controversial. In his “Guide,” Sam Stone at CBR.com argues the crossover event drove deep wounds within the superhero community. Indeed, its ramifications bled into the darker universe of “The OMAC Project” and Geoff Johns’ “Infinite Crisis.”

Chiefly, “Identity Crisis” is near the top of this list because of its inter-connectedness and the insurmountable danger it poses. The JLA is expert at handling crises, alien invasions, wars and natural disasters. However, moral dilemmas are another matter entirely. Simply put, what happens when the greatest DC Universe heroes are put before a secret involving questionable moral choices and tragedy?

While Rags Morales’ art shows the urgency of the situation, Brad Meltzer goes through the thought processes of its heroes in the narration. Then, what we are facing is a murder mystery that promises to rip through the relationships in the DC Universe. So, who wiped Doctor Light’s mind? Also, who wiped Batman’s mind? Finally, who is at fault? If these questions spring more dramatic events in the future, the story arc ends with a twist.

To sum, this is ethics put to the test of DC’s elite metahumans and gods. Precisely, it is why it belongs at the top of the list as one of DC Comics’ most thought-provoking stories. Definitely, this story is an essential JLA story.

INTERESTED IN THIS STORY? CLICK ON “Identity Crisis (New Edition)“ BELOW TO PURCHASE THE COMIC ON AMAZON.

Collects ‘Justice’ #1-12. *This limited series is not canon to DC Mainstream continuity.

‘Justice’ offers a flashback on previous Pre-Crisis JLA stories. In his 2009 interview with Newsarama, writer Jim Krueger revealed his inspiration for the 12-issue limited series. Specifically, Krueger intended a Super Friends vs Legion of Doom Silver Age story. And it showed the Silver Age elements resonated with fans. Indeed, ‘Justice’ #1 sold out upon its release.

Simply, the plot is straightforward. Motivated by dreams where the Justice League fails, members of the Legion of Doom assemble. In a few words, their plan is to destroy the JLA in order to better the world. Of course, it turns out their partnership is the result of manipulation by genius evil masterminds.

So, what makes ‘Justice’ work out is its ambition. By pitting against one another good superhero vs evil supervillain teams, Krueger crafts a “superhuman war.”1 More importantly, Alex Ross’s art is the central draw for the price of admission. Without a doubt, his photographic paintings create an experience worthy of the most timeless DC stories.

Definitely, this limited series is certainly a must-have for your JLA collection. In particular, fans of the Silver Age will love the classic feel of good vs evil.

CHECK OUT THE REVIEW: 00s SUPERMAN STORYLINES RANKED FROM BEST TO WORST.

*This story is a one-shot.

Decisively, “Crisis On Infinite Earths” put an end to the DC multiverse. However, the concept would resurface in continuity with “Zero Hour” and “Hypertime.” Largely because of Grant Morrison, the DC multiverse would surely come back. In a one-shot, “JLA: Earth-2” recounts the first multiversal meeting in Post-Crisis continuity. Per chance, the Justice League of America meets its antimatter counterpart from Earth-2, the Crime Syndicate of America.

Desperately, Lex Luthor, the unexpected hero from Earth-2, has come to the DC Primary Earth. Dangerously, he enlists the JLA to aid in fighting off the Crime Syndicate on Earth-2. Unfortunately, things do not go as planned. Eventually, the counterpart teams return to their respective worlds.

Definitely, one of the more polished JLA stories. In a CBR Exclusive, there is speculation that Earth-2 may originate from the Dark multiverse. Also, do not miss the animated movie Justice League: Crisis on Two Earths (Two-Disc Special Edition).

Over the years, DC Comics published the “Year One” line of titles. In Post-Crisis continuity, they serve as important origin stories to the greatest heroes in the DC Universe. Previously, in “’00s Batman Graphic Novels Ranked From Best To Worst,” we reviewed Batman graphic novels set in the “Batman: Year One” continuity.

To begin, ‘JLA: Year One’ is set ten years ago in the Post-Crisis continuity. In short, it is part origin story and part world-building. In a few words, the Justice League of America first forms in order to stop an Appelaxian alien invasion. Soon, the JLA are a sensation on Earth. Despite their obvious differences, the founding members who are Green Lantern, Flash, Black Canary, Aquaman and Martian Manhunter must learn to work together. However, trouble brews. As they uncover the clues of the secret organization known as Locus, the JLA soon learn there is a spy in their ranks.

Obviously, the JLA are DC’s A-list superhero team. Indeed, Morrison’s JLA immortalized the Big Seven: Superman, Batman, Wonder Woman, Green Lantern, Flash, Aquaman and Martian Manhunter. Here, what makes “Year One” work is the introduction of B and C-list heroes. Definitely, there is chemistry and even romance. In the final issue, is the grand finale with big splash pages of ensemble battles. Though, Brian Augustyn’s art suffers throughout the book due to a lack of distinctiveness.

Nevertheless, Mark Waid’s maxi-series is a fan favorite. Indeed, its blend of adventure, optimism and romance make for a fun experience. Definitely, this is essential JLA.

INTERESTED IN THIS STORY? CLICK ON “JLA: Year One Deluxe Edition” BELOW TO PURCHASE THE COMIC ON AMAZON.

A FAN OF GRANT MORRISON? BUY “SUPERMAN, THE GREATEST STORY”

LIKED MY E-BOOK? WRITE A REVIEW ON AMAZON.

Gloriously, “JLA: Rock Of Ages” is one of the most celebrated Justice League stories. In fact, the Morrison/Porter three and half year run has been touted the definitive JLA. In Grant Morrison’s JLA run, “Rock Of Ages” is the third story arc.

Storytelling-wise, Morrison’s story arc fits within a wider narrative. In effect, Morrison devised an alternate DC mythology with big sci-fi concepts and scale. This thread, of an impending crisis that threatens the entire DC multiverse, runs through Morrison’s story arcs. Dangerously, we envision a glimpse of that threat when Luthor and the Injustice Gang use the Worlogog to create an alternate future. In that future, Darkseid has imposed the Anti-Life Equation on New Genesis and Earth.

Critically speaking, the story appears bombastic. Yet, as the future would demonstrate, Morrison was erecting a Superman-centric universe. In “DC One Million,” that future comes to pass. Definitely, “JLA: Rock Of Ages” revealed DC’s most ambitious story yet.

INTERESTED IN THIS STORY? CLICK ON “Rock of Ages (Justice League (DC Comics) (paperback)) by Grant Morrison (24-Sep-2008) Paperback” BELOW TO PURCHASE THE COMIC ON AMAZON.