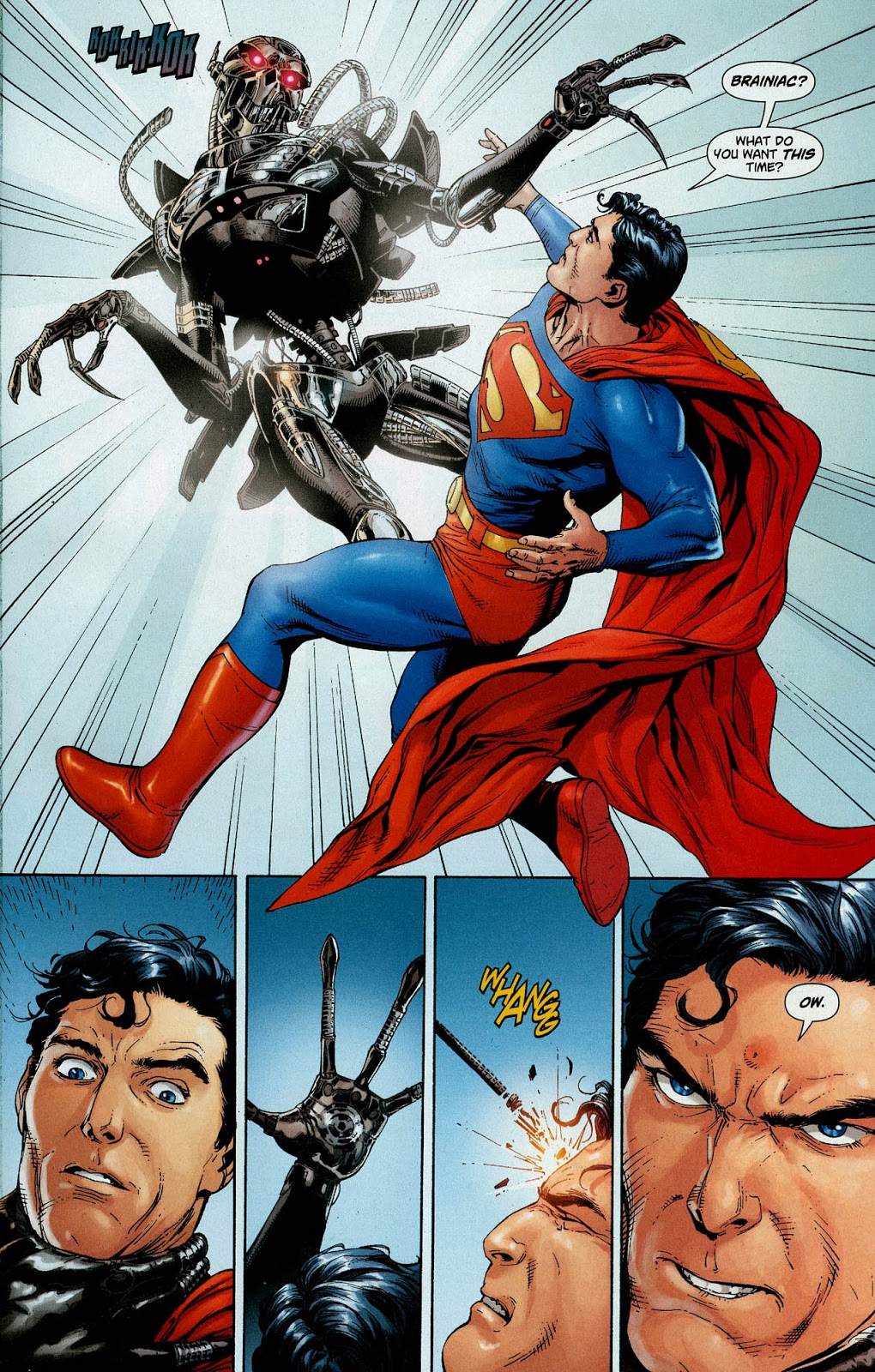 In ‘Action Comics’ (2008) #866, Krypton comes in “first contact” with Brainiac an artificial intelligence from the planet Colu.1 35 years ago, Brainiac invaded the planet Krypton and stole the city of Kandor. General Zod notes Brainiac is “unnatural.”1

Brainiac sends robotic drones that kill people. General Zod and Ursa do not succumb to the hysteria of alien invasion. They attempt to fire back at Brainiac’s robotic drones. Their firepower has no effect. As they try to protect the people, a force field is erected around Kandor which disappears in a flash of light. Thus ends the “first contact” with Brainiac.1

BRAINIAC SENDS A PROBE TO EARTH

In ‘Action Comics (2008) #866, Superman comes in contact with one of Brainiac’s robotic probes near Metropolis. The robotic probe attacks Superman who bleeds. Superman fires a blast of heat vision but the probe is protected by a force field. As Superman prepares his attack, the Brainiac probe scans his blood for DNA, confirms that he has found a Kryptonian then deactivates. He sends the message to the Brainiac Skull Ship.

In ‘Action Comics’ (2008) #867, at the Fortress of Solitude, Supergirl is horrified at the probe. Superman notes that Brainiac is a telepath and telekinetic with a mind a 1000 times more powerful. Brainiac has always taken a different appearance in their encounters some organic, some robotic. Supergirl replies that all of Superman’s encounters were with Brainiac’s programming, not the real Brainiac. Supergirl reveals every Kryptonian feared Brainiac and burns off the robotic probe with her heat vision.

In ‘Action Comics’ (2008) #867, Superman flies into deep space with a Kryptonian spaceship to locate Brainiac. He comes in “first contact” with the Brainiac Skull-Ship and finds Brainiac invading a planet with his probes but is unable to prevent the city from being bottled. Brainiac sends a nuclear missile to the sun that sets off a chain reaction that blows the sun and the planet. Superman floats unconscious in space. In ‘Action Comics’ (2000) #868, wakes up as he is being experimented upon. He quickly frees himself and battles Koko, a monster the result of mutation upon Brainiac’s Skull Ship.

Superman heads to the control room where the bottled worlds are held and finds Kandor. At this time, Brainiac awakens outside his bio-shell for the first time “in three centuries.”2 Brainiac reveals that he has been seeking Superman to complete his knowledge of Kryptonian culture and plans on assimilating him. Brainiac’s final programming reveals the dangers of mad science: it is to assimilate the knowledge of the galaxy within “a matter of hours.”2 Brainiac engages Superman in combat and reveals his decision to invade Earth in order to assimilate Supergirl.

They reveal to him that they had devised a dome using Brainiac’s technology around Argo as Krypton was nearing destruction by Brainiac. Recognizing his technology, Brainiac integrated Argo with Kandor. Brainiac is able to recover from Superman’s attack and capture Superman and Supergirl from Metropolis. He plans to integrate Superman by uploading the data of five worlds into Superman’s mind. As the Brainiac Skull-Ship bottles Metropolis, Brainiac sends his solar aggressor to detonate the sun.

SUPERMAN AND SUPERGIRL SAVE EARTH, METROPOLIS AND KANDOR

In ‘Action Comics’ (2008) #870, Brainiac remarks that concerning Metropolis: “this culture is useless.”3 Superman frees himself from his prison and attacks Brainiac. He manages to attack his A.I. Superman frees Kandor and Metropolis. He finds Supergirl being experimented upon and frees her. He asks her to intercept the missile sent to the sun or else it will go supernova. Supergirl tells Superman she is scared and Superman tells her that “it’s okay to be scared.”3

Superman tells Brainiac that life can’t be controlled nor bottled. He takes Brainiac outside his Skull Ship and engages him in combat. Brainiac is startled at the biotic environment and collapses. He tells Superman the cities are tethered to his bio-shell and their containment fields cannot hold. As Superman frees Metropolis and Kandor, Brainiac attacks the Kent farm in Smallville. Meanwhile, Supergirl manages to intercept and to destroy the solar aggressor. Though Superman manages to restore Metropolis from its “first contact” with Brainiac, and Kandor – a once-dead alien species – to their proper sizes, Jonathan Kent has a heart attack.

9 thoughts on “DC Day: In A First Contact With Superman And Supergirl, Brainiac Invades Earth”