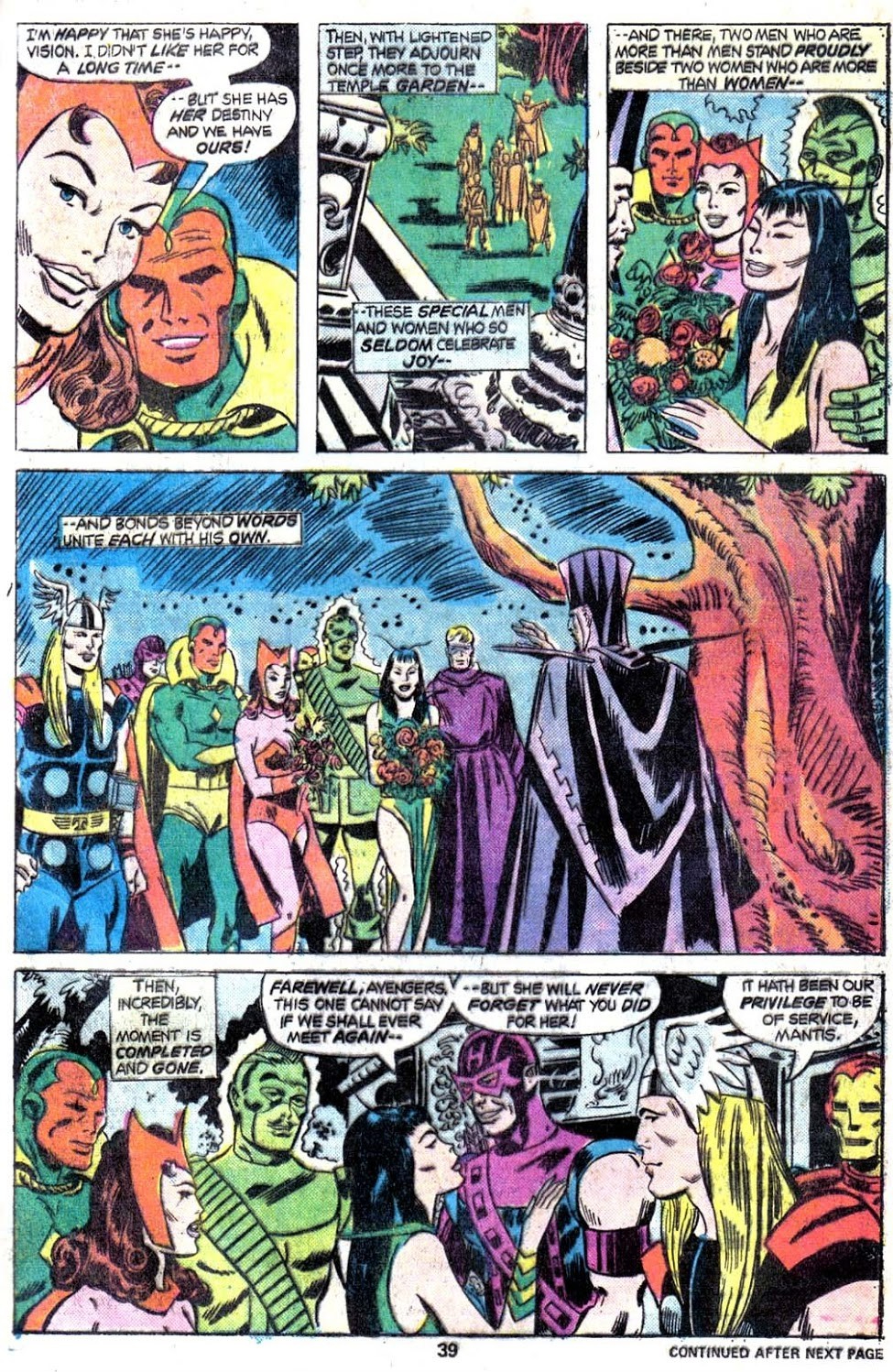 In ‘Giant Size Avengers’ #4, Vision ponders his origin as he attempts to save Scarlet Witch from Dormammu and his sister Umar. The Vision discovered that he was not originally Ultron’s creation, designed by the android to infiltrate and dismantle the Avengers. After he turned on his master, The Vision struggled to accept that he was created by a super-villain. Instead, he was created in 1968 by Ultron-5 and Professor Horton who rebuilt the original synthezoid the 1940s Human Torch into the Vision.

Ultron’s goal was to create a “son” that would serve his evil “scheme[s].”1 Though Ultron-5 had created a new body, he had not altered the Human Torch’s mind. The new creation immediately attacked Ultron-5. Ultron-5 then turned on Professor Horton and killed him with a blast. The android showed feelings of care for the one he called “father” as he laid dying.1 When the android confronted Ultron-5 in rage, he was felled which resulted in altering his mind “re-programmed using the taped brain patterns of a dead Wonder Man…”1 The Vision was born!

IN A BATTLE TO THE DEATH, THE VISION CONFESSES HIS LOVE TO SAVE THE SCARLET WITCH FROM DORMAMMU’S HELLISH POSSESSION IN THE DARK DIMENSION

The Vision awakens from his gaze. He hears a scream and heads in the direction of the sound. He sees the spectacle of a hellish pit with Dormammu and his sister Urma holding his beloved, Scarlet Witch bound in chains on a sacrificing surface. The Vision has to save the Scarlet Witch to prevent Dormammu to reach his full power in order to conquer the Dark Dimension!

Dormammu asks the Vision to forget Scarlet Witch and leave. But Vision says it’s a bluff. Soon, demons appear in the shadows and fight. They hurl liquid fire at the Vision. The Avenger, however, grows intangible, then by “partial solidification”, he absorbs the “supernatural flame” and fires it as a solar blast using his solar gem.1

The Vision drained slowly of his solar energy admits Wanda’s magic has defeated him. He says she is killing him and begs of her to remember him. As the Vision falls to the floor to near death, he confesses his love for Wanda.

Seeing her beloved lying motionless on the floor, Scarlet Witch exclaims: “What have I done?” Speciesism is conquered and it is the love of a synthezoid for a mutant witch that conquers evil! The Vision’s love saves Wanda. The Scarlet Witch, free from Dormammu’s possession, promises to make him pay.

Using her organic powers “one final time”, the Scarlet Witch strikes at the lava’s heat to which Dormammu is bound in order to prevent his regeneration.1 Dormammu asks Urma’s aid but the Vision having been revived by the Scarlet Witch notes and strikes her humanoid form, unlike Dormammu who is a being of “pure force.”1 Urma writhes in pain.

Suffering loss, Dormammu admits defeat and asks of the Scarlet Witch what she wants. Scarlet Witch asks for Dormammu’s word that the Vision, Miss Harkness and her can return safely to Earth, safe from him and his sister; that he will free the Earth spirit; and that he will no longer seek to conquer the Earth’s dimension.

Dormammu gives her his word though he hides his true intentions from her. In thought bubbles, it is revealed that he made a similar pledge to Doctor Strange and he states he owes Scarlet Witch “only hatred.”1 Dormammu promises in his secret intentions to make her regret her trust.

CHECK OUT THE STORY: IN ‘TOWER OF BABEL’, RA’S AL GHUL USES BATMAN’S MAD SCIENCE TO TAKE OUT THE JUSTICE LEAGUE OF AMERICA

WANDA AGREES TO MARRY THE VISION; THE AVENGERS ASSEMBLE FOR THE MARRIAGE AT IMMORTUS’ TEMPLE GARDEN

Scarlet Witch, the Vision and Miss Harkness are teleported back to Avengers Mansion. After Miss Harkness departs, Scarlet Witch and the Vision speak. Vision confesses his love for Wanda and explains that after they quarreled, he “lived a life without warmth.” When Mantis offered to be Vision’s partner, he felt nothing for her. He asks Wanda to marry him. Asked by Wanda if the Vision loves her because she was the first girl he met, the Vision explains that he loves her because he is an Avenger and she is the only one who can understand his life as an Avenger.

Now that the Vision knows his origin, he knows he was meant to live as a human and is willing to make Wanda happy. In some ways, it is his love for the Scarlet Witch that saves the Vision and helps him see clearly. Wanda agrees to marry the Vision. Soon, Immortus gathers Scarlet Witch and Vision at the Temple Garden. They announce to the Avengers their decision to marry. Iron Man and Thor are elated while Hawkeye is unsure. Still, the ceremony as well as the marriage between Mantis and Swordsman (Cotati) are celebrated. This is the proof that love can conquer even speciesism and unite different species.

In ‘JLA/Avengers’ (2004) #4, Vision and Scarlet Witch have to restore their marriage to their proper course in the space/time continuum.

15 thoughts on “Marvel Day: In The Dark Dimension, Vision Confesses His Love, Saves Then Marries The Scarlet Witch”