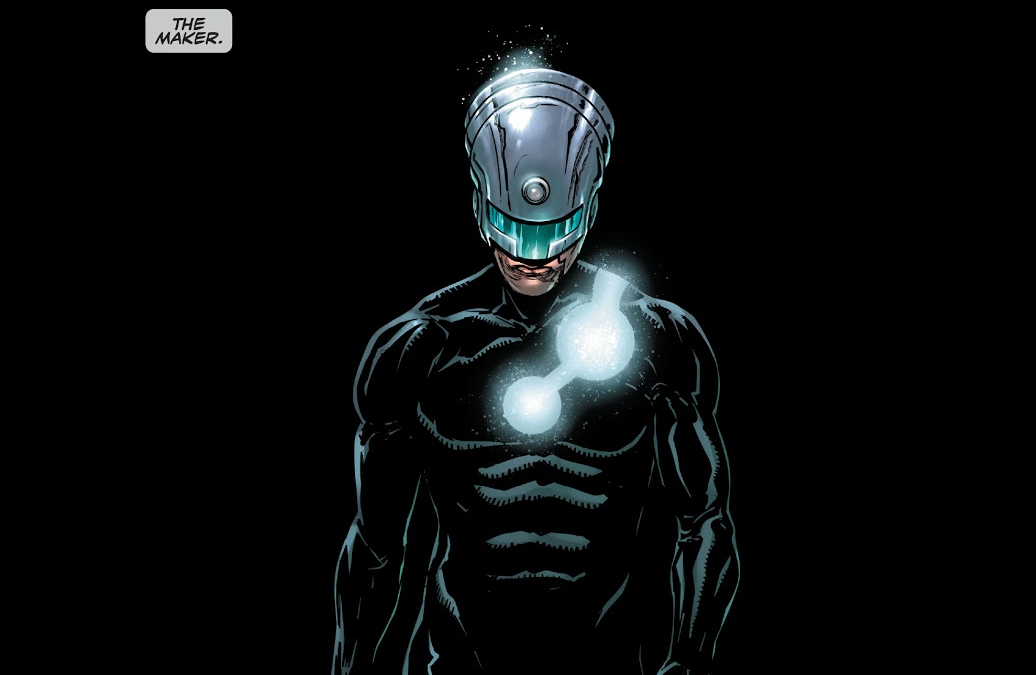 In the “Ultimatum” event, Magneto creates cataclysmic events on Earth-1610. Previously, Hawkeye‘s assassination attempt on Magneto was thwarted at the cost of Quicksilver’s life. Indeed, in retaliation for the deaths of his children, Wanda and Pietro. Using Thor’s Mjolnir, Magneto shifted the planet’s magnetic poles. As a result of the cataclysms, millions died including several Ultimate heroes.

In order to regain a sense of normalcy, Reed Richards proposed to Invisible Woman. However, Sue rejected his proposal. In ‘Ultimate Comics Ultimates’ (2013) #30, Reed’s descent towards Maker is evident. A week after the Ultimatum, Kang the Conqueror visited Reed from the future. Shockingly, Kang revealed herself as Sue Storm. Incredibly, she commissioned Reed to gather the Infinity Gauntlet. In short, she wanted to prevent the end of the Ultimate Universe. In the end, the path would lead to Mister Fantastic becoming the Maker.

AFTER “KING IN BLACK,” MAKER IS A MULTIVERSAL ANOMALY

In “Venom” (2021) #200, Eddie Brock is adjusting to being the new King in Black. As the God of the Symbiotes, Eddie can control all the symbiotes. Really, all that ever existed and he can see through them. In fact, he can pilot them to multiples places at the same time. Moreover, his omniscience allows him to see Knull’s first war against the God of Light. Curiously, Eddie speculates he may be able to travel through the timestream and alter history.

Nevertheless, the only being that has ecaped his omniscience is Maker. In ‘Venom’ (2020) #26, Maker had successfully created an artificial symbiote. To this end, he had used an Earth-616 symbiote. Sinisterly, he had planned to travel to the Ultimate Universe. However, his plan was foiled by a man in an Iron Man-esque armor. Finally, Maker was transported to the Ultimate Universe through a dimensional rift. In a sense, he became a multiversal anomaly.

CHECK OUT THE FAN THEORY: Miles Morales In The Mainstream Marvel Universe Means The Ultimate Universe Was Rebooted After Secret Wars.

IN ORDER TO JOIN THE COUNCIL OF REEDS, MAKER MIGHT CONQUER EDDIE AND DYLAN BROCK

In ‘Venom’ (2021) #200, Eddie appears at multiple locations in the Marvel Universe. Seriously, he warns the different heroes of Maker’s master plan. Ultimately, Maker seeks to join the Council of Reeds. Ironically, all members of the Council come from stable universes. Decisively, they have tasked Maker to restore the Ultimate Universe. Ultimately, it is the condition before he can join.

As Eddie reveals, Maker’s plan likely involves erasing the Marvel Universe. On top, he would rebuild the Ultimate Universe. Initially, his work for the Council is under the code name “Project Oversight.” Historically, Maker was interested in symbiotes for dimensional travel. Logically, Eddie and Dylan would be his targets. Perhaps, he would raise his own army of synthetic symbiotes.

6 thoughts on “Fan Theory: Following “King In Black”, Maker Might Conquer Eddie And Dylan Brock To Restore The Ultimate Universe”