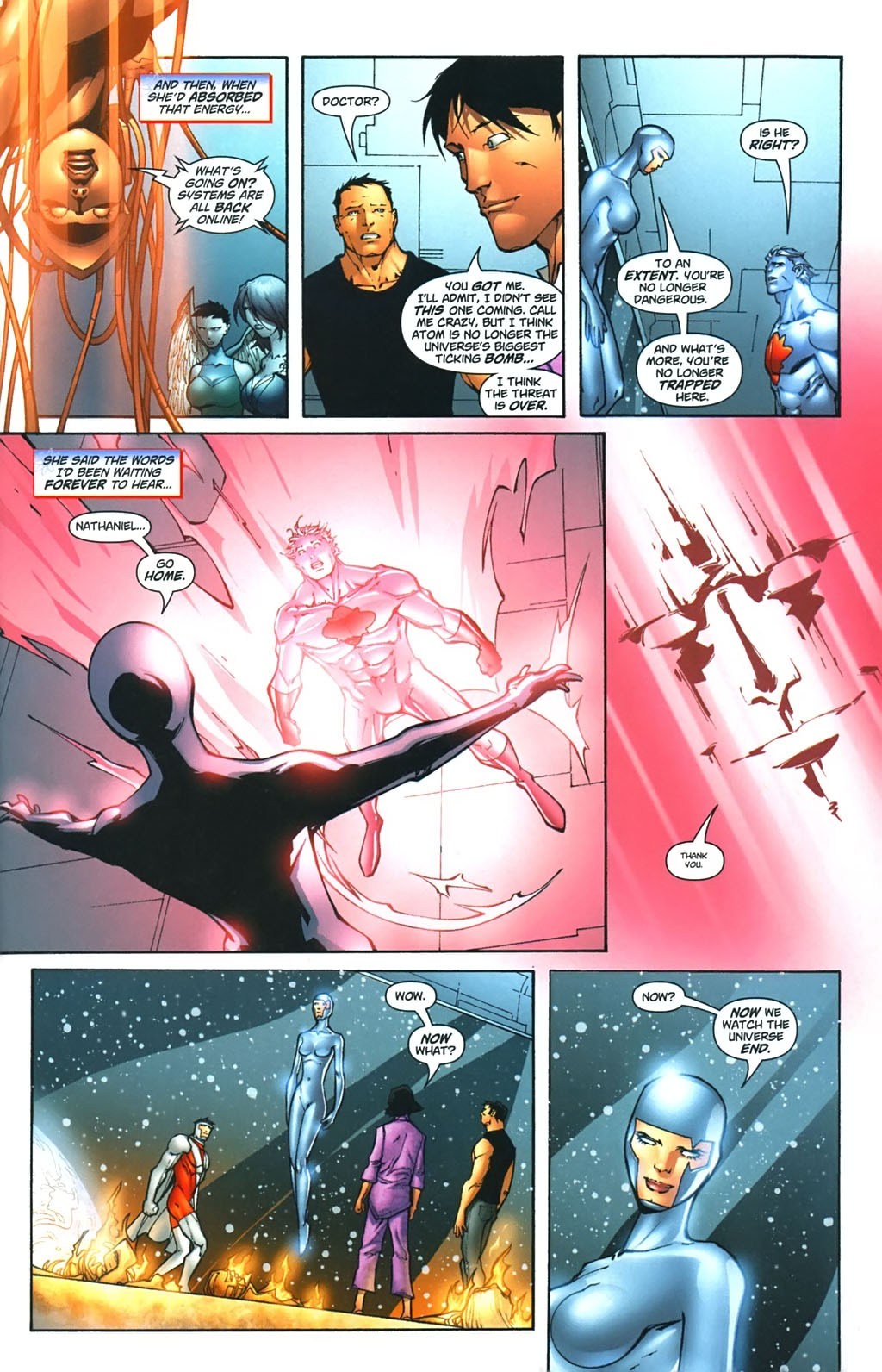 In ‘Captain Atom: Armageddon’ (2006) #1, Captain Atom lands in a parallel universe in the DC multiverse: the Wildstorm Universe to presage the Worldstorm. The issue opens with Captain Atom flying the Composite Superman/Batman robot into space in order to bomb a Kryptonite asteroid.

On the way, Captain Atom remembers being placed in another cockpit with the Dilustel metal set to explode on an atomic bomb. Captain Atom had the choice of either remaining in a military prison for life or doing the experiment. Captain Atom remained in the capsule for twenty-three years.

Despite his misgivings, Captain Atom’s sense of duty drove him to become a superhero. This illustrates the fact that patriotism is part of every hard working person and that the nation always benefits from offering each person, even ex-cons a chance at redemption. Captain Atom states: “I’ve got a job to do.”

The Composite Superman/Batman robot blows up with the Kryptonite asteroid. Captain Atom awakens startled back in Tokyo with Superman and Batman. Then, he is sent to another universe like a comet through the sky. He arrives in New York City as Nikola Hanssen being created into Void by a man opening a box containing Void.

CHECK OUT THE STORY: IN THE DARK DIMENSION, VISION CONFESSES HIS LOVE, SAVES THEN MARRIES THE SCARLET WITCH

SHOWDOWN AT THE WHITE HOUSE: CAPTAIN ATOM VS MISTER MAJESTIC!

In ‘Captain Atom: Armageddon’ #3, Captain Atom visits the White House after a fight and a conversation with Mister Majestic at Mount Rushmore. Startled by the Wildstorm Universe, Captain Atom struggles to understand the brutality of its superheroes and the fear people have of them. He wants to return to his parallel universe in the DC multiverse. In some sense, it is the paranoia of contact with parallel universes that seems to question of our very individuality.

Is Captain Atom experiencing this paranoia, as the people react to the presence among them of a superhero with fundamentally different physical dimensions. At the White House, Captain Atom faces a nuclear strike which he evades. He speaks to the President and tells him he is a military man. Captain Atom says he needs the President’s help to return but the President states he fears and answers to the superheroes.

As he leaves the White House, Captain Atom is intercepted by Majestic. They have another scuffle. At the end of the battle, with no decisive winner, Majestic reveals to Captain Atom: The Nightmare Equation. That is, Captain Atom’s presence is going to lead to the Worldstorm of a parallel universe of the DC multiverse: the annihilation of the Wildstorm Universe.

SHOWDOWN AT THE WASHINGTON MONUMENT: CAPTAIN ATOM VS THE WILDC.A.T.s.!

In ‘Captain Atom: Armageddon’ #4, Captain Atom is intercepted by the WILDC.A.T.s. at the Washington Monument. Its members are: Maul, Voodoo, Warblade and Zealot. As they face their foe, the WILDC.A.T.s play a game of who can think of the least number of movies so that he/she can take on Captain Atom. Reverting to his smaller more intelligent form, Maul wins the game.

Maul increases his mass and punches Captain Atom through the ground into the underground subway. Looking at his files, Captain Atom identifies his weakness and decreases Maul’s mass; then, he punches him back to the surface. Next, Voodoo uses her control of magnetism and telepathy to “to tell [his blood] to rip your veins to pieces.”1 Captain Atom uses the data he has downloaded from the Pentagon to overload Voodoo’s telepathy.

Warblade goes on the offensive and quickly slices Captain Atom with his sharp blades. Captain Atom responds by blasting him. Finally, Zealot fights Captain Atom. Captain Atom decides to reason with Zealot but she does not listen. Then, he decides to end things. He blasts Zealot. However, Zealot blocks it with her sword and attacks him. She proves to be the superior fighter and soon has Captain Atom on the ground.

As Zealot is about to kill Captain Atom, he remembers a gas main in the underground subway. Captain Atom blasts it creating an explosion that knocks out Zealot. Grifter and Nikola Hanssen arrive on the scene. As Grifter changes into costume and is about to take on Captain Atom, a door takes Captain Atom. He is teleported to the moon and a mysterious woman greets him. She is impressed by his super powers and invites Captain Atom to show him about “real power.”1

THE WORLDSTORM IS AVERTED! … OR IS IT?

Back at the WILDC.A.T.s.’ base Grifter finds out the truth from Jeremy. Jeremy tells Grifter that Void and Captain Atom both have the Void signature. However, Void has “enough to tip the balance.”2 In fact, Void and Captain Atom should be in the same vicinity, or else in this parallel universe of the DC multiverse, Worldstorm might occur in the Widlstorm Universe. Then, Grifter realizes she is missing. Nikola closes her eyes then she finds herself at the place where she got her Void powers.

Captain Atom finds her there and says he came back to the place because he felt a connection to the place. He remarks maybe she did too. Captain Atom feels relieved meeting her since “you’re not wearing a cape, you’re not shooting laser beams from your eyes or turning your fingers into razors.”2 Captain Atom feeling she is an average human touches her left shoulder. Nikola says “Wait! Don’t…”3 Then an explosion. Nikola turns into Void.

In ‘Captain Atom: Armageddon’ #9, Apollo and Midnighter bring Captain Atom by force onboard the Carrier. It is a fight between the Authority and Captain Atom, highlighting the sort of physical conflict resulting from the presence of different dimensional beings from parallel universes in the DC multiverse. Captain Atom attempts to reason with Hawksmoor.

The Worldstorm has started. Hawksmoor asks Apollo to absorb Captain Atom’s nuclear energy before the chain reaction is critical, however, he is not sure if Apollo can survive it. Apollo attempts to absorb the energy only to be incinerated. Midnighter laments the death of the man he loves. He attacks and gets incinerated by Captain Atom. Captain Atom states that the Authority can no longer stop the process. Hawksmoor orders the Doctor to free Mister Majestic from his time freeze. Jenny the spirit of the 21st century arrives and also gets incinerated.

Before the Worldstorm starts, Nikola finally accepts her Void persona and her WILDC.A.T.s. connection to the new dead Grifter. When the Worldstorm starts, Void races to the Bleed to help Captain Atom in order “to become whole again.”3 She arrives on the Carrier and does the impossible. Void removes the Void signature from Captain Atom and states: “Finally. I’m whole.”3 Then she says: “Nathaniel… Go home.”3 As Captain Atom is transported back to his parallel Earth in the DC multiverse, he states: “Thank you.”3 Then, Void asks everyone to watch a new Wildstorm Universe end, while a new one begins.

9 thoughts on “DC Day: In The ‘Armageddon’ Storyline, The WildC.A.T.s. Rescue Captain Atom Stranded In The DC Multiverse From The WorldStorm”