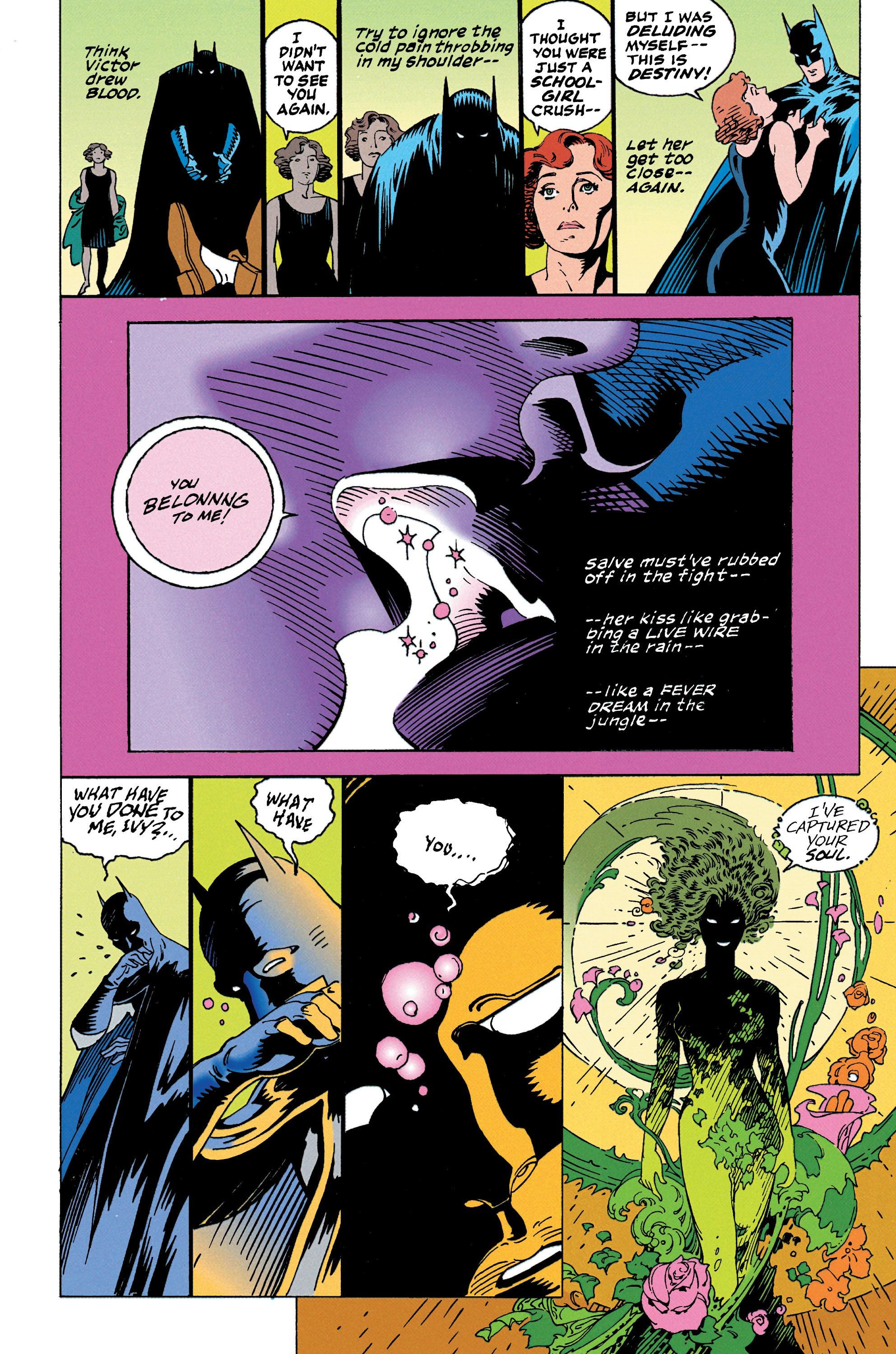 POISON IVY HAS POISON IN HER CELLS

Poison Ivy is one of the deadliest femme fatales in the DC Universe. Her super power is the ability to mystically control plant life for a variety of purposes. How do her powers work?

Chlorokinesis(Post-Crisis only): Semi-mystical connection to the plant world through a force called the Green. She was able to manipulate and animate plants, using roots to form supports for a tunnel. She controlled an entire tree to come down on Clayface, ensnaring him in its branches. She once brought a whole skyscraper down with giant vines.

Toxikinesis(Post-Crisis only): A deliberate overdose of plant and animal based toxins into her blood stream that make her touch deadly. Ivy can create the most potently powerful floral toxins in Gotham City. Often these are secreted from her lips and administered via a kiss. They come in a number of varieties, from mind controlling drugs to instantly fatal necrotics. Her skin is toxic as well, although contact with it is usually not fatal.

IMAGINE YOUR CELLS POISONED WITH CHLOROPHYLL

Pre-Crisis and Post-Crisis, Pamela Isley fell in love and ended up betrayed. In Post-Crisis continuity, she was a test subject in one of Doctor Jason Woodrue’s experiments. The experiments were torturous, and Pamela was nearly killed twice. Eventually, she ended in the hospital for six months and a change in her physiology happened.

Toxins in her bloodstream made her touch deadly and immune to all poisons, viruses, bacteria, and fungi. She also gained the ability to produce pheromones that she could use to seduce men into doing her bidding. Unfortunately, the results of these experiments also left her unable to have children, and she has treated her plants as her children ever since.

Enraged at her betrayal by a man, Isley suffered violent mood swings. She later caused a boyfriend to have a car accident by bringing about a massive fungal-overgrowth in his lungs. Isley then left Seattle, eventually settling down in Gotham City.

In a terrorist attempt, Pamela Isley threatened to release deadly spores into the air in Gotham City. She became known as Poison Ivy.

IN ‘GOTHAM CITY SIRENS’ #4, POISON IVY SEES THROUGH THE GREEN ON A CITY-WIDE SCALE

HOW POWERFUL IS POISON IVY?

In Feat: Batman, Batman: Gotham Knights #64′, Bruce Wayne synthesizes an anti-toxin to render Poison Ivy human. Poison Ivy has 50 trillion cells in her body which are chlorokinetic and thus photosynthesize. In order to revert Poison Ivy to her human form, Batman had to revert her chlorokinetic cells to human cells. The change involved an energy projection of 1.3*10^16 Joules of biochemical energy. This corresponds to a Continent Level of Energy Projection.

IN ‘SUICIDE SQUAD’ (1987) #35, POISON IVY STATES SHE HAS ENOUGH POISON IN HER NAILS TO KILL AN ELEPHANT

Poison Ivy has enough poison in her cells to kill an elephant. From this feat, we can calculate the amount of poison in Poison Ivy’s cells: 2.3617174*10^13 Joules of energy. This is a Continent Level of Energy Projection.

FEAT OF THE DAY: IN ‘BATMAN: LEGENDS OF THE DARK KNIGHT’ (1993) #43, POISON IVY’S KISS CAUSES BATMAN TO HALLUCINATE