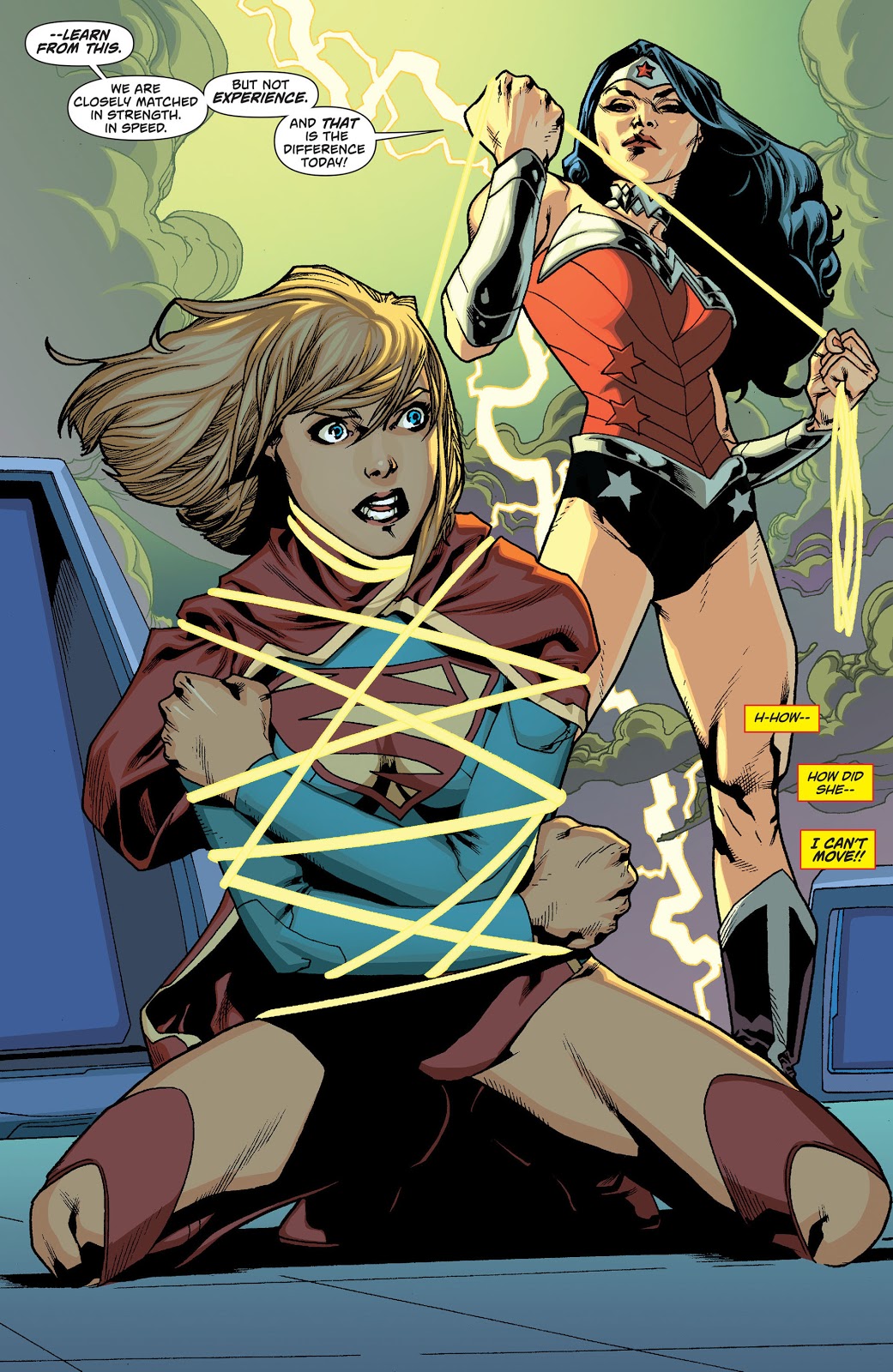 FEAT: IN THE CENTER OF THE EARTH, SUPERMAN BENCH PRESSES THE EARTH FOR FIVE DAYS STRAIGHT

Supergirl meets Clark at his apartment as Lois is visiting. When Lois departs, the two fly to Metropolis Centennial Park. Superman is surprised at Supergirl’s ability to speak English. She tells Superman she has made a friend who can help them restore Krypton. Immediately, H’el flies in. He introduces himself and tells Superman he was part of the space mission that would ultimately send Kal-El to Earth. However, he arrived 27 years after Kal-El.

Superman does not believe H’el and tries to convince Supergirl otherwise. At that moment, H’el teleports Superboy. Superman is shocked at H’el’s speed and at his violence. H’el tells Superman that he is going to kill Superboy, since being a clone he is considered an aberration whose species destroyed Krypton ages ago. A fight follows where H’el’s super powers outmatch Superman. Having defeated Superboy, H’el departs promising to restore Krypton with Kara’s help.

After an attack by H’el, a powerful Kryptonian, Superman visits Lex Luthor in a military prison designed to specifically hold him. General Garrison initially refuses to let Superman meet Lex Luthor, but Superman convinces him. Lex Luthor is held in a containment cube defended by antimatter cannons. H’el has taken control of Superman’s Fortress of Solitude and only the most intelligent mind on Earth can help him. Luthor has a scarred face which was caused by Superman. He reveals to Superman that he is aware of H’el and Superboy.

Superman asks if it is possible to go back in time in order to prevent the destruction of Krypton. Lex Luthor reveals Superman’s mind is second to his. He asks to speak with Superboy which results in an exchange about Superboy’s genetic structure. Luthor reveals it is possible by creating a reverse Big Bang that will destroy the solar system. Luthor tells Superman that the Man of Steel already guessed it, though he meant to ask whether it would have to kill H’el in order to prevent it. Superman and Superboy depart with the Man of Steel contacting the Justice League.

A FAN OF THE END OF THIS STORY? CLICK ON “Superman: H’el On Earth” BELOW TO PURCHASE THE COMIC ON AMAZON.

At the location of the Fortress of Solitude, H’el prepares his Star Chamber in order to time travel to the destruction of Krypton. Wonder Woman prepares to fight Supergirl. Though Wonder Woman admires Supergirl’s bravery, she has no sympathy for her misguided grief. In the mean time, Superman fights H’el. He scolds H’el for manipulating Supergirl’s grief to his nefarious ends. At that moment, H’el punches Superman into space.

Meanwhile, Wonder Woman has managed to tie Supergirl in her Lasso of Truth. She comments that though they are a close match in strength and speed, experience is the difference-maker. This is significant since in Post-Crisis continuity, Supergirl has been stated to be stronger than Superman. Though, however, Superman is ranked as stronger than Wonder Woman by Checkmate. Post-Flashpoint, Wonder Woman and Supergirl are matched physically.

6 thoughts on “DC Day: During The “H’el On Earth” Storyline, Wonder Woman Bests Supergirl In Combat”