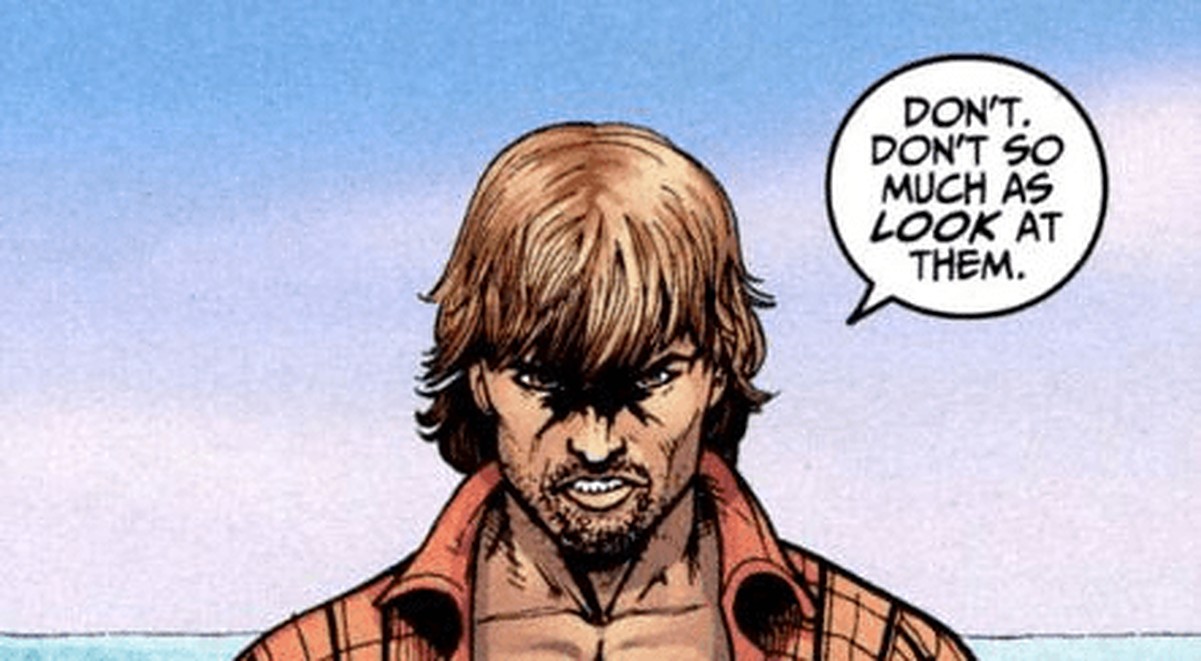 In the Wildstorm Universe, World’s End occurs after Armageddon. Due to the Reaper’s nuclear holocaust, the God-like Max Faraday intervenes. To this end, he causes the Rapture of billions of people from Earth. In reality, he teleports the survivors to St. Louis. There, their routine continues as they are unaware of Armageddon.

At St. Louis, Max is meeting with the WildC.A.T.s and Team 7. Sternly, he blames the disaster on superheroes. Too often, he says, their interference lead to greater threats. For his part, Max plans to remain neutral in the war till all superhumans are erased. When Max senses danger in the South Pacific, he realizes he must intervene.

In the South Pacific, the terrorist named Tao has threatened Susanna Chaste, Max’s wife. In the nick of time, Max, the WildC.A.T.s and Team 7 teleport on the scene. There, they face Tao and his men. Arduously, the battle rages. Using their reality-warping powers, Max and Tao are matched. Then, Zealot and Kenesha teleport to Hawaii.

There, they enlist Majestic’s help. With the Nemesis Swords – forged in the fires of Creation – Mister Majestic turns the tides. Violently, he pierces Tao’s body. Brutally, Tao is defeated but he has an ace. Before he can be executed, Pit Bull and a goon are holding Max’s wife at gun point. Desperately, Max agrees to reveal the Creation Equation to Tao in order to save her. Dangerously, Tao steals Max’s godhood.

CHECK OUT THE STORY: In “Gang War”, Mister Majestic Becomes The Poster Boy Of The 1990s Leading An Ultra-Violent W.I.L.D.C.A.T.s. Against Friends And Foes Alike.

A FAN OF THIS STORY? CLICK ON Wildcats: World’s End BELOW TO BUY THE COMIC ON AMAZON.

HAVING DIVIDED HIS POWER, MAX AND THE HEROES TRIUMPH

Later, the battle shifts to the Hollow Realm. Here, is the source of Creation. At the Hollow Realm, Tao plans to destroy then re-make the universe. First, he has locked the god-like heroes in prisons of their failed loves. Eventually, Void and Susanna Chaste free themselves. Soon, they confront Tao. In battle, the truth of Tao’s origin emerges. Originally, a test tube baby, he was grown and studied as an experiment. As a result, he grew without love.

Soon, the other heroes emerge. In fact, they tempt Tao with one attempt: to fix himself. Suddenly, Grifter appears and shoots Tao in the head. Then, the villain disappears but does not come back. Soon, Max and the heroes regain their near-full powers. With his faith in superheroes restored, Max tasks them to re-build Earth. In the meantime, he plan on transporting the survivors with Void’s help to the hollow realm. In one final act, Max restores the heroes’ 90s costumes with some alterations.