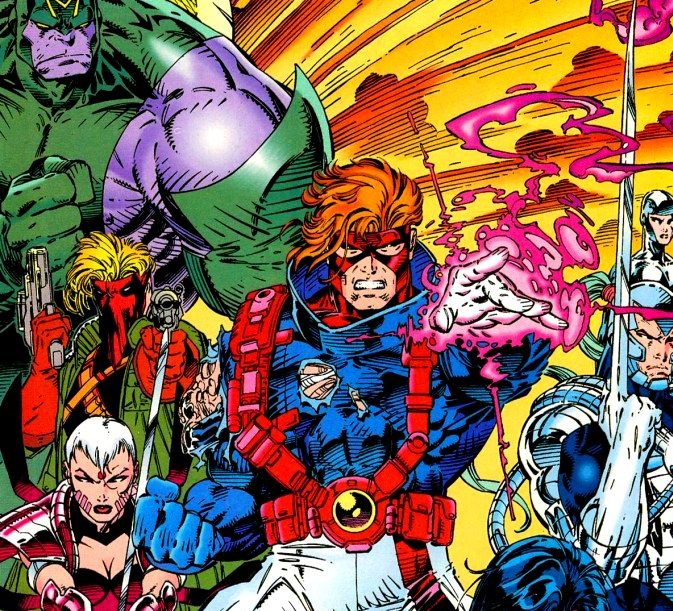 You may have seen the TV show in the ’90s: Spartan, Grifter, Zealot, Warblade and Co. participate in a war between two alien races. The show was successful though it ended after Season 1. WILDC.A.T.s. was even made in a Super Nintendo video game.

Wildstorm was the dream of two childhood friends, artist Jim Lee and writer Brandon Choi. Early on, Lee worked for Marvel on projects like “Punisher War Journal” and “Uncanny X-Men.” His art got him notoriety and recognition.

Eventually, Lee quit Marvel and originally set up Homage Studio which would become “Wildstorm.” Then, Lee recruited his childhood friend, Brandon Choi and they would release their first comic “WildC.A.T’s: Covert Action Teams #1.”

Lee and Choi imagined the WildC.A.T.s. as a different brand of superheroes. The premise of the first issue was the millennial war between two alien races: the Kherubim and the Daemonites. Unfortunately, the war was transported to Earth and both races formed teams and organizations in order to eliminate each other.

The leader of the team was a Kherubim synthoid named Spartan. He recruited other Kherubim warriors such as Lord Emp, the Coda Warrior Zealot, the Kherubim Half Breed Maul, and Warblade who could change his body into weapons.

We are introduced to the concept of the Kherubim and Daemonites, two ancient alien races who have been at war for millennium and brought that war to earth thousands of years before. The Kherubim were immortal, very powerful, and human in appearance who breed with humans over the years creating super powered beings known as half-breeds in the process. The Daemonites are body snatchers by nature and inhabit key beings of power, such as their current leader Helspont who inhabits a powerful alien body. So by 1992 these two races had used Earth as a battleground and the war was ramping back up again.

-“The WildCats: From The Beginning To The Wildstorm,” TC

The first issues involved the WildC.A.T.s. fighting the threat of the Cabal. Four issues in, the WildC.A.T.s. had to face Rob Liefield’s Youngblood over the Daemonites having taken control of Vice President Dan Quayle. A modified Youngblood team took on Supreme in ‘Supreme’ (1992) #1.

The first crossover of the series was with Mark Silvestri’s “Cyber Force.” Two important characters were going to be introduced during Chris Claremont’s “the Gathering of Eagles”, who were Mister Majestic, the Superman analog, and Savant, Zealot’s sister. Alan Moore would take over the growing “Wildstorm” universe with issue #21.

ALAN MOORE TAKES OVER ‘WILDC.A.T.s.’ IN VOLUME I

In the ’90s, though he was sought after, comic writer Alan Moore refused to work for DC and Marvel and remained secretive. Instead, he decided to work for growing comic companies and small-scale projects.

He found his way to Liefeld’s Extreme Studios to work on Supreme and Youngblood but also released the still unfinished 1963 through Image. Moore’s run on WildC.A.T’s could have been one of the most satisfying super hero stories I’ve ever read but was marred by replacement artist after replacement artist.

-“The WildCats: From The Beginning To The Wildstorm,” TC

NEXT: WILDC.A.T.s. Face The Kherubim/Daemonite War. May 3rd.