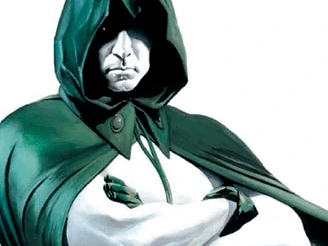 *To celebrate Crisis on Infinite Earths (1986) #10, published this month, read our Overpowered Beings article on Spectre. Visit our Formidability Rating below.

SPECTRE IS THE SPIRIT OF VENGEANCE OF THE PRESENCE

In More Fun Comics (1940) #52, the Spectre made his first appearance in the Pre-Crisis continuity. In the origin story, the Spirit of Vengeance is a New York City police officer named Jim Corrigan.

As the Spirit of Vengeance, the Presence tasks the Spectre with exacting vengeance on evil men. Moreover, Spectre is a founding member of the Justice Society of America. The JSA makes its debut in All Star Comics (1940) #3.

In Crisis on Infinite Earths (1986) #10, Spectre makes a surprise appearance. After the heroes destroyed the Anti-Monitor’s antimatter cannon on Qward, Anti-Monitor goes to the beginning of time, in order to destroy the positive matter universe.

However, the outcome turns out completely different with a new universe created. Really, Spectre is dependent on the Presence and is as strong as the being allows him to be.

OVERPOWERED, SPECTRE CAN CREATE A UNIVERSE

In Crisis on Infinite Earths (1986) #10, only five Earths remain after the destruction of the multiverse: Earth-One, Earth-Two, Earth-Four, Earth-S and Earth-X.

In a final attempt to destroy the positive matter multiverse, Anti-Monitor time travels to the Dawn of Time. There, he intends to view the beginning of time and destroy all reality.

At the Dawn of Time, the heroes and the mages of the DC multiverse are assembled to stop the enemy. There, Spectre appears, channels their combined powers and reaches into Anti-Monitor’s Hand of creation.

Though he fails from preventing Anti-Monitor to contemplate Krona‘s experiment on the DC Universe, he nevertheless succeeds in creating a new universe. With his reality-warping powers, Spectre dies and creates the New Earth continuity.

In this comparison, with the power of five Earths, Spectre is evidently Multiversal-Level in Energy Projection, and ranks below the Source.

FAN CELEBRATING THE DC UNIVERSE AND FANDOM IN DALLAS, CUERO, CLARENDON OR SULPHUR SPRINGS TO ENTERTAIN YOURSELF AS A HOBBY ABOUT #THEDCCOSMICHIERARCHY OF THE DC MULTIVERSE AND COLLECT THE DC BOOK? TO #CELEBRATECOMICCON, CLICK ON GEORGE PEREZ’S CRISIS ON INFINITE EARTHS BELOW TO COLLECT THE GRAPHIC BOOK AND BECOME THE GREATEST DC UNIVERSE FAN IN YOUR CITY.

Philosophically, Spectre is God’s Wrath. In DC Pre-Crisis mythology, Spectre is a fallen angel named Aztar. After the fall of angels, he repented before Heaven, and the Presence erased his identity, bonding him to God’s Wrath.

Since Spectre is a ghost and has no memory of his evil past, he needs a human host in order to help him exact the Vengeance of the Presence. Regularly, Jim Corrigan is the most common Spectre human host.

In Day of Vengeance (2005) #2, Eclipso, who is also an aspect of God’s Wrath convinces Spectre that the cause of evil in the DC Universe is magic. Moreover, the Guardians of the Universe had to contain magic with the Starheart, in order to bring order to the universe.

In a philosophical sense, Spectre is God’s Wrath because he seeks vengeance for evil in the universe. Also, he seeks redemption for his own past.

VOTING FOR THE DC UNIVERSE? BECOME A MEMBER

WHY SPECTRE IS AN OVERPOWERED BEING

HIS OMNISCIENCE EXTENDS TO THE OMNIVERSE

In Marvel Versus DC (1996) #2, the two Brothers representing both franchises awaken to renew their abstract battle. To find out whose universe survives, their heroes must do battle.

In the issue, the Spectre and Living Tribunal both use their nigh-omniscience to see beyond and over to the Omniverse.

In DC Comics Presents (1981) #29, Spectre faces the might of the Bronze Age Superman.

When Supergirl goes missing, Superman searches the entire universe. At superluminal speed, he even breaches the bounds of infinity.

To prevent him from entering Heaven, Spectre confronts him. In a classic battle, an all-out Superman delivers a powerful punch that creates a crater.

However, Spectre does not move at all and is unfazed by Superman’s might.

Considering Superman’s punch shook mountains, and is likely at least a Magnitude 5.0 earthquake, Spectre’s base durability is at least City-Level.

DO YOU CELEBRATE THE DC UNIVERSE? SHARE WHY YOU LOVE CRISIS ON INFINITE EARTHS

*Our website can officially be translated in 24 different languages.*Look for the dropdown menu at…

Gotham: To Celebrate “Crisis on Infinite Earths”, We List Every Comic Series that the Arrowverse Crossover Is Based On

In ‘Crisis On Infinite Earths’ (1985) #7, titled “Beyond The Silent Night,” Supergirl performs a…

FAN THEORY IN FRANCHISES, COMIC VALUES AND COLLECTIONS WHAT IS THE RETURN OF SUPERBOY? During…