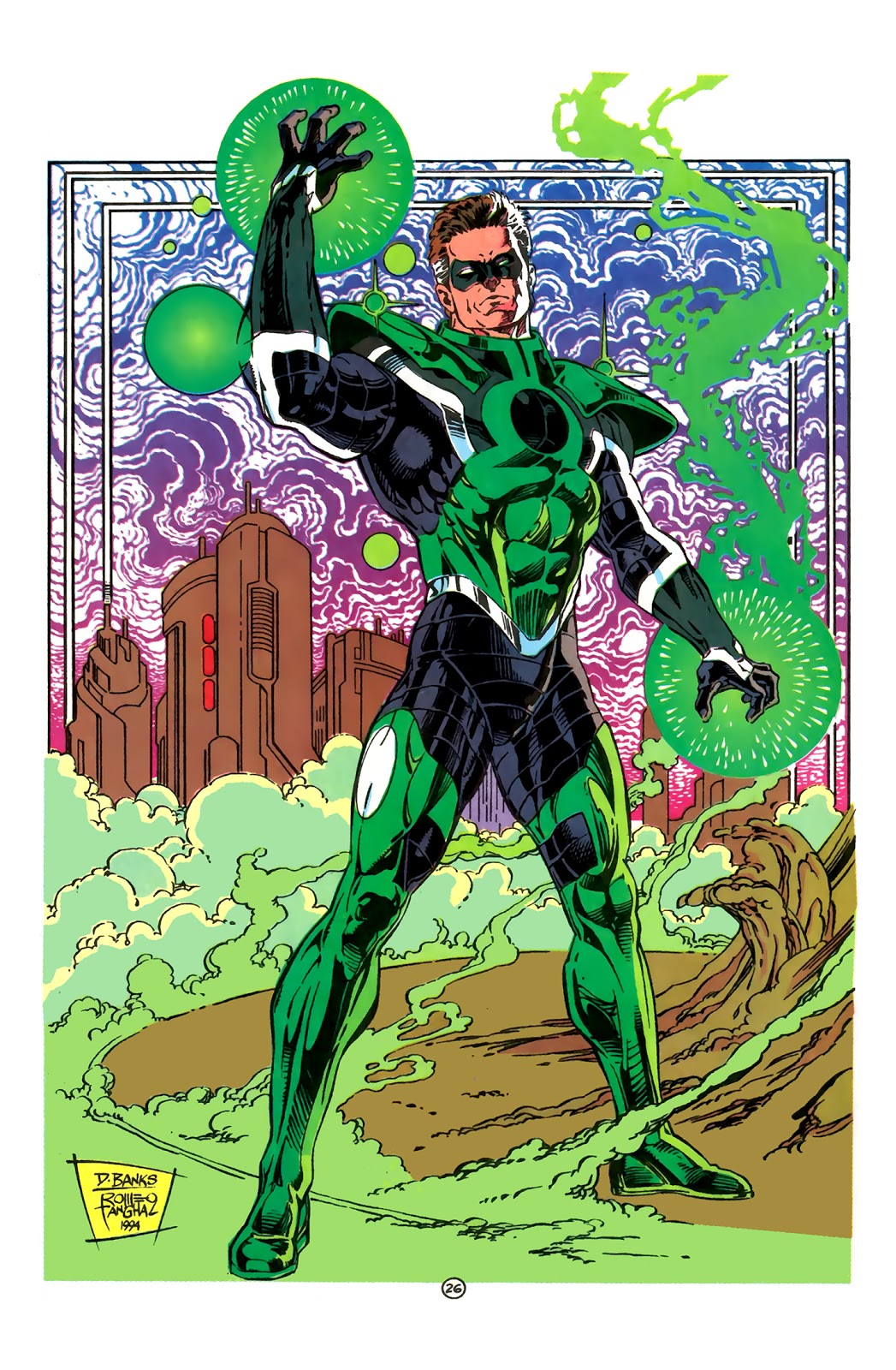 After the return of Superman from the dead, Green Lantern is overwhelmed with grief over the destruction of Coast City. He sees the huge crater created by Cyborg Superman megalomaniacial ambitions and remembers the death of Abin Sur who in his dying breaths sent the ring to select him, Hal Jordan, as his replacement. Then, Hal wants to do anything with his ring. Even, yes, recreate Coast City with power ring constructs.

FEAT: A MAD GREEN LANTERN RECREATES COAST CITY WITH HIS POWER RING IN MINUTE DETAIL AND CONVERSES WITH THE CONSTRUCTS

THE ORIGIN OF PARALLAX

Fast forward along the timeline after the destruction of Coast City and Hal Jordan becoming Parallax then bonding to the Spectre. In ‘Green Lantern: Rebirth’ (2005) #3, the demonic insectoid entity named Parallax is coming to Earth. And it is coming to claim Hal Jordan’s soul bonded to the Spectre. As the JLA finds itself with Hal Jordan’s dead body on the Watchtower, Green Lantern Kyle Rayner tells Green Arrow the story of Parallax.

On the tenth planet from the sun Pagallus, Green Lantern was warned of the arrival of Parallax and one of their elders told him Parallax’s origin story: Originally, Parallax was born at the beginning of sentience. It was a demonic monster that infected planets with fear causing entire civilizations to be eradicated by paranoia and violence. Parallax fed on fear while the Guardians of the Universe used willpower to forge the Central Power Battery of Oa and to combat the threat.

The opposite energies could not destroy each other. So the Guardians imprisoned Parallax “put into a comatose state” on the Central Battery of Oa.1 Over the millennia, Parallax became known as the yellow impurity. That explains why the power ring could initially not work on the color yellow. Kyle added that “only someone able to overcome great fear would master the power ring.”1

Parallax was apparently dead for billions of years. Then, one day, Parallax was weak, hungry and looked through the Central Power Battery AI to reach a power ring of a suitable host with a strong will. It found Hal Jordan. Over the years, it worked subtly to influence Hal, sowing self-doubt and fear. The first signs were the streaks of white hair. And then, the destruction of Coast City warped Parallax’s control over Hal Jordan causing his decimation of the Green Lantern Corps. Until Hal Jordan became… Parallax.

In ‘Green Lantern’ (1994) #48, Hal Jordan’s constructs of Coast City fade because his 24 hour power ring charge has finished. A Guardian of the Universe appears and asks him to come to Oa at once for disciplany action over transgressing a Green Lantern rule: using his power ring for personal gain.

Hal exclaims it is about personal loss and ends up destroying the head of the construct. With a mad grin on his face, Hal intends to go to Oa. What follows in the following issue, is a complete decimation of the Green Lantern Corps by Hal Jordan. Hal’s battles are bloody, vicious and to the death!

GREEN LANTERN BESTS SINESTRO IN MORTAL COMBAT, KILLS THE GUARDIANS OF THE UNIVERSE AND BECOMES… PARALLAX

In ‘Green Lantern’ (1994) #50, Hal Jordan arrives on Oa and grieved over the destruction of Coast City, gives into the darkness. He is greeted by Sinestro who has been freed from the Central Power Battery to battle him as a last line of defense. Hal has stolen the power rings of the Green Lanterns he has killed and agrees to use only one power ring in order to make the fight fair. The fight commences. Both combatants are evenly matched. However, in one final blast, there is an explosion and both combatants’ costumes are tattered.

The fight turns into a fist fight and Hal soon has the upper hand. Finally, Sinestro seems to surrender by saying “Wuh-We’re… Fuh- Finished, all right…”2 At that moment, Hal takes Sinestro into a bear hug and snaps his neck. Then, Hal walks dramatically towards the Central Power Battery. Suddenly, he is punched by Kilowog. However, he responds by incinerating Kilowog with a blast. Then, after an argument over his rampage and the destruction of Coast City with the Guardians, Hal begins to absorb its energy. It is at this time that the Parallax entity is freed and is bonded to Hal’s soul. Parallax emerges and kills all the Guardians of the Universe save Ganthet.