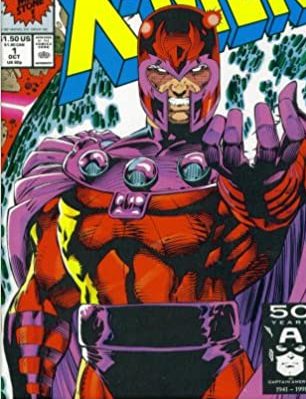 Home » Super Power » Super Power: Magneto’s Mastery Of Magnetism Is The Next Phase Of Human Evolution And Makes Him An Omega Level Mutant

WHY MAGNETO IS THE MASTER OF MAGNETISM

As Homo superior, Magneto is the next phase of human evolution. Originally, the master of magnetism represents the mutant population which by accidents of evolution has been granted super powers. Magneto‘s mastery of magnetism is the super power to control, manipulate and shift magnetic fields on a planetary to solar system scale. In the past, the mutant powerhouse was once classified as an Alpha Level mutant. This has been changed to an Omega Level mutant. In fact, what is an Omega Level mutant?

The term, initially “Omega Level Mutant Abilities” was seemingly used at first by Fred Duncan, and quickly adopted by Charles Xavier to define some of his first students, and was described in those terms: “Yet what he called Omega (the last) he meant as regards to an “ultimate threat,’ while I simply prefer to think of such mutant abilities as unlimited potential.“

In other words, what makes Magneto an Omega Level mutant is power without limit. In fact, Magneto has been stated on several occasions to be the most powerful mutant on Earth.1,2,3 On another occasion, he has been called the most powerful being on Earth.4

In early X-men stories, the X-men regularly met Magneto as their foe. In ‘X-Men’ (1978) #112, the X-men return to Mesmero’s carnival trailer to find… Magneto. Eager to even the score with the X-Men, Magneto systematically subdues each member. Phoenix intervenes during the fight, and Magneto quickly defeats her by siphoning her Phoenix flame. Clearly, it has been stated that Magneto’s power rivals Phoenix’s.5 In Marvel continuity, Professor X and Magneto have been shown to match and defeat the Phoenix in duels.

In ‘New X-Men’ (2004) #150, the Omega Level mutant faces a resurrected Phoenix. During the battle, Jean Grey has the upper hand though Magneto is initially protected by his helmet from Phoenix’s telepathy. Finally, Magneto attacks Phoenix with a planetary electromagnetic pulse, giving her a heart attack. Both Omega Level mutants die: Phoenix dies while Magneto seemingly dies at the hand of Wolverine.

It appears Phoenix is Magneto’s limit as an Omega Level mutant. This means Magneto’s powers can at least match Phoenix’s at the Solar System Level. Of course, Phoenix has been classified as a Multiversal being, Beyond Omega Level.

MAGNETO CAN CONTROL ANY METAL TO ACHIEVE VARIOUS EFFECTS

Magneto used his control of metal to expand and manipulate the magnetic field around the Celestial’s headless armor.

In ‘X-Men’ (1993) #25, Magneto attacks humanity on a planetary scale over his mutant nation space station Avalon. The attack in the Avalon storyline is an EMP at the planetary scale that causes all the nations of the Earth to lose power and go dark.

Magneto’s control of magnetic fields, allows him to create EMPs similar to nuclear explosions. This is an effect of his ability to produce magnetic rays on a planetary scale.

MAGNETO CAN MANIPULATE IRON AT THE ATOMIC LEVEL

As master of magnetism, Magneto can manipulate iron at the atomic level.

FEAT OF THE DAY: IN ‘ULTIMATE X-MEN’ #6, MAGNETO USES HIS THOUGHT HELMET TO PROTECT AGAINST PROFESSOR X’S TELEPATHY

10 thoughts on “Super Power: Magneto’s Mastery Of Magnetism Is The Next Phase Of Human Evolution And Makes Him An Omega Level Mutant”