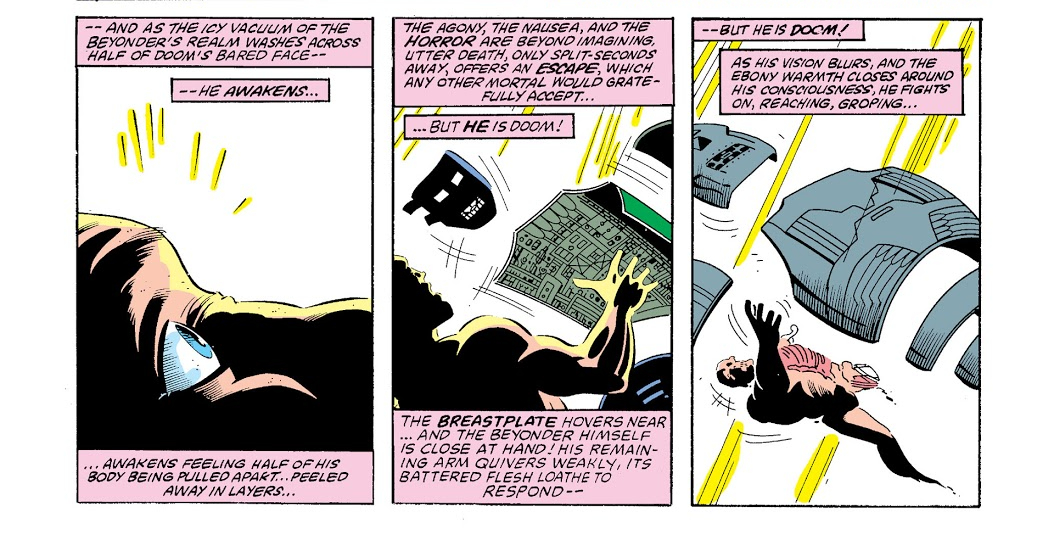 Interviewed by leukemia survivor KJ Ricci, Stan Lee revealed Doctor Doom is his favorite supervillain. The legendary writer said he does not see Doom as a villain and would like to clear his name.

In his new-found omnipotence, Doctor Doom’s senses expand. Really, Doom realizes his cosmic senses encompass all reality. Inside their cells, the Baron of Iron is aware of the villains’ secret thoughts and desires. Furthermore, he is aware of an intruder, Captain Marvel.

BATTLE AT THE EDGE OF THE UNIVERSE

Immediately, Doctor Doom battled Beyonder in the Beyond-Realm. Incredibly, the battle was so fierce that it sent shockwaves through space. In fact, Battleworld was feeling quakes as a result of the titanic battle.

However, Doctor Doom is soon overwhelmed by the Beyonder’s godly power. Desperately, the Destroyer beams an image of himself back to Battleworld. Before the assembled heroes, he asks for their powers. Hesitantly, Magneto steps forward. Quickly, he is tackled by Wasp, Hawkeye and Iron Man.

With his last ply thwarted, the tide of the battle turns against Doom. Courageously, Doctor Doom attempts to grow nearer. But, the Beyonder’s infinite power doubles his onslaught. Finally, in bursts of energy blasts, Doom’s legs are cut off and he is felled.

Tragically, the Baron of Iron feels the “cold embrace [of Mistress Death] seems imminent.”1 Defiantly, Doctor Doom rejects the Spectre. His words ring out: “Victor Von Doom must not die!”1

With his foe defeated, Beyonder comes down to examine him. Intrigued, he peers through Doom’s life. Moreover, he dissects Doom apart, layer by layer. Proving his willpower is supreme, Doom resists the agonizing pain.

In a classic story from the ’60s, Doctor Doom proves his grandiloquence by trapping Silver Surfer and stealing the Power Cosmic.

In great Jack Kirby’s style, Doctor Doom utters his grandiloquent speech to challenge the Devourer of Worlds and world domination.