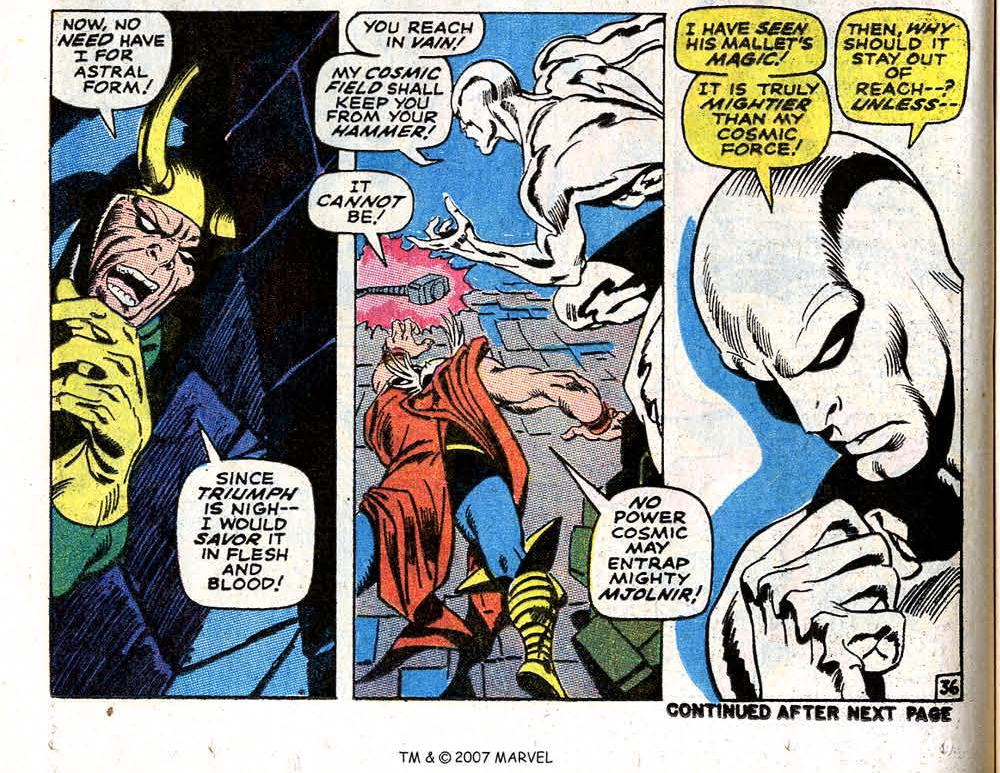 In ‘Silver Surfer’ (1969) #4, titled “The Good, The Bad And The Uncanny!”, Silver Surfer performs an energy projection feat. Loki has mischievously brought Silver Surfer to kill Thor. Silver Surfer challenges Thor, though unbeknownst to him, Loki has added to his power. During the battle, Silver Surfer’s Power Cosmic encases Mjolnir in a cosmic field preventing Thor from reaching the Uru hammer.

Head over to How Powerful Is Silver Surfer? by Variant Comics.

Silver Surfer has been brought to Asgard by Loki’s mischief. His mission is to kill Thor in order to stop a purported war. Silver Surfer challenges Thor to a duel. During the battle, Silver Surfer uses the Power Cosmic to encase Mjolnir in a cosmic field to prevent Thor from reaching the Uru hammer. With Loki’s power augmenting his Power Cosmic, Silver Surfer prevented the enchantment on Thor’s hammer such that Mjolnir would not reach Thor.

We will use the mystical enchantment on Mjolnir in order to calculate the Silver Surfer’s energy projection.

In ‘Journey Into Mystery’ (1964) #101, Thor has fallen in love with mortal Jane Foster. As he prepares to go to Asgard to plead his case to marry Jane, Loki projects a vision of Thor to Odin showing his plans. Odin decreases the worthiness enchantment on Mjolnir by half and bans Thor from Asgard until he renounces his love.

Mjolnir increases Thor’s power by half. Let’s estimate Thor’s energy projection from his highest power output which is the God Blast.

The statement indicates Galactus is Universal Level in Durability. In ‘Thor’ (1969) #161, Thor unleashes the God Blast on Galactus in order to stop the fight between Galactus and Ego the Living Planet.

Since Thor’s God Blast put Galactus near death, it is at least Universal Level in Energy Projection.

The worthiness enchantment on Mjolnir gives Thor half of his divine power. The worthiness enchantment has been broken by Thor, the Red Norvell, Beta Ray Bill, and Captain America. They all have in common that they embrace the warrior code. Thor’s highest power, the God Blast, is Universal Level in Energy Projection. Thor does not need Mjolnir in order to project this super power and even at half power, can release it on his own.