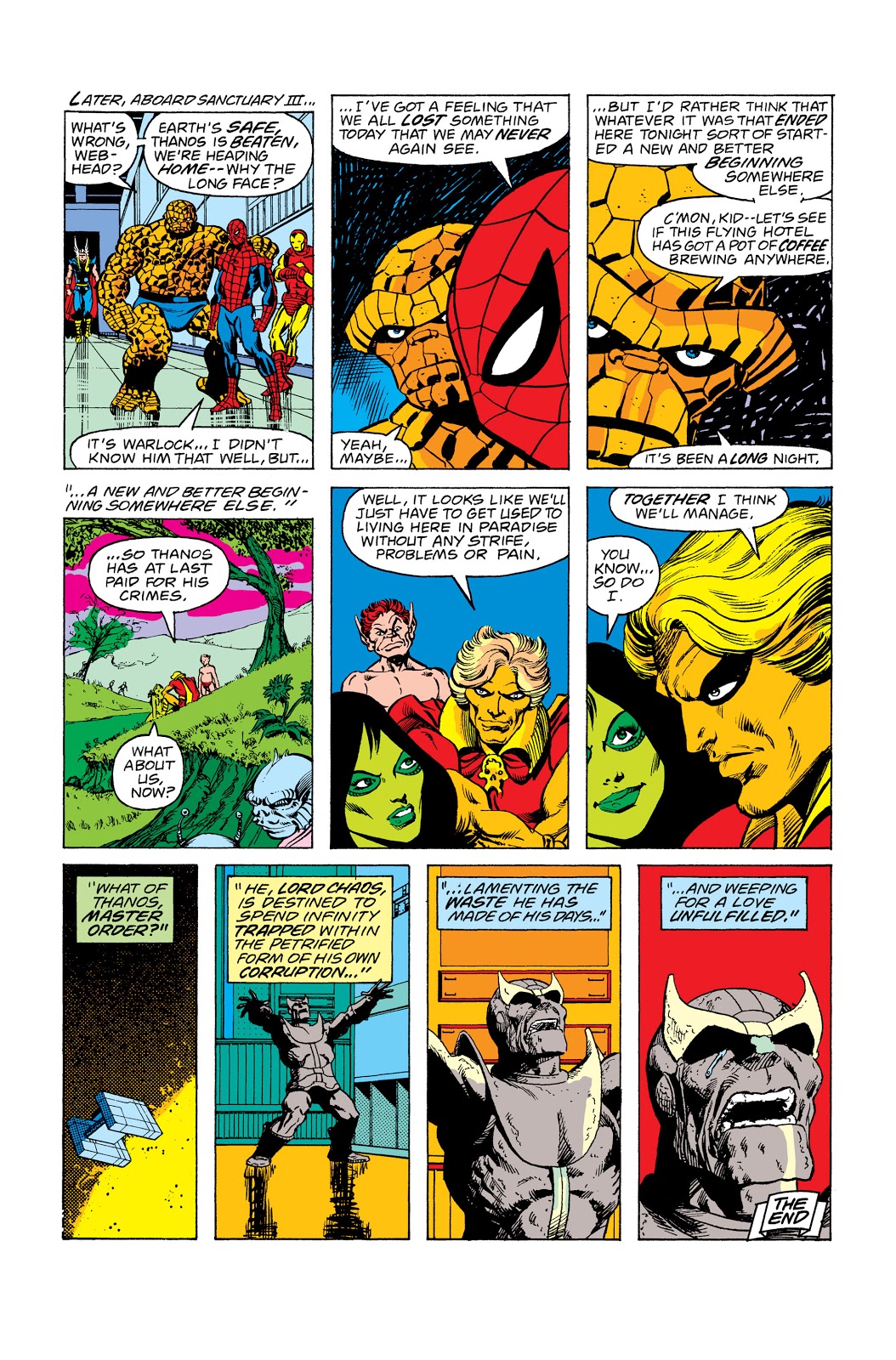 In ‘Avengers Annual’ (1977) #7, Adam Warlock saves the universe from mad titan Thanos using the Soul Gem. Adam Warlock arrives on a planetoid in space and finds out that Gamora is dying. He learns Gamora attempted to prevent Thanos’ plan and was struck down. Adam learns of Thanos’ plan and heads for Earth for help. Captain Marvel and Moondragon arrive at Avengers Mansion. Iron Man and Vision sense a foreboding.

Suddenly, Moondragon senses a star’s detonation light years away. She exclaims: “It has begun!” Suddenly, Adam Warlock arrives at Avengers Mansion. He tells the Avengers of Thanos plan: Resurrected, Thanos in order to win Death’s love, has gathered the six Infinity Gems and plans to detonate the stars. Moments later, Starcore, the orbital tracking station, announces news of an alien armada on track to Earth. The Avengers realize it is Thanos and depart on Moondragon’s Space Cruiser.

THE AVENGERS FIGHT THANOS AND HIS ALIEN ARMADA

The Avengers seem outmatched by Thanos’ alien armada. Thor and Iron Man head into space in order to stop the invasion. Meanwhile, the rest of the Avengers land on a replica of Sanctuary II in order to take the fight to Thanos.

However, Adam Warlock and Captain Marvel head to the original Sanctuary II on the other side of the sun. Thanos begins to detonate the sun.

STRUCK BY THANOS, ADAM WARLOCK’S FUTURE SELF STEALS HIS SOUL INTO THE SOUL GEM TO PREVENT THE BIRTH OF MAGUS

Adam Warlock and Captain Marvel arrive on Sanctuary II. Captain Marvel speeds through the window and is momentarily stunned. Mad at the deaths of Gamora (his former love) and Pip the Troll, Adam Warlock punches Thanos. Thanos responds with two attacks that leave Adam for dead. In the meantime, the other Avengers arrive. As Thor battles Thanos, Iron Man destroys Thanos’ synthetic Soul Gem. Thanos teleports away.

GUIDED INTO SPACE BY MOONDRAGON’S DREAMS, SPIDER-MAN AND THING FREE THE AVENGERS FROM THANOS

In ‘Marvel Two-In-One Annual’ (1977) #2, Adam Warlock saves the universe from Thanos and finds rest in the Soul Gem dimension. Moondragon sends telepathic calls to Spider-Man for aid under the form of dreams. The dreams show the battle between Thanos and the Avengers and the danger posed to the universe. In order to resolve his dreams, Spider-Man heads to ask Thing for help. Thing believes Spider-Man’s story and accepts to help. Spider-Man and Thing take the Fantastic Four’s shuttle craft and head for “the giant space ark” on the right side of the sun.1

They arrive and are tractor beamed aboard Sanctuary III. The two heroes battle but are quickly subdued and knocked unconscious. As they awake, they find the Avengers in a room and held in stasis. Another battle follows and Spider-Man attempts to flee. However, as foreseen by Master Order Spider-Man soon returns to the site of the battle and destroys the machine that was holding the Avengers captive. The Avengers are free! But Spider-Man still has to retrieve Adam Warlock’s Soul Gem.

A FAN OF THIS BATTLE? CLICK ON ‘THANOS: THE FINAL THREAT #1’ BELOW TO PURCHASE THE COMIC ON AMAZON.

CHECK OUT THE STORY: STRANDED ON EARTH, SILVER SURFER IS REUNITED TO SHALLA BAL, ONLY TO LOSE HER AGAIN BECAUSE OF MEPHISTO!

FREED FROM THE SOUL GEM BY SPIDER-MAN, ADAM WARLOCK’S SOUL TURNS THANOS INTO GRANITE THEN FINDS PEACE IN SOUL WORLD

4 thoughts on “Marvel Day: Having Saved The Universe From Mad Thanos, Adam Warlock’s Soul Rests In The Soul Gem Dimension”