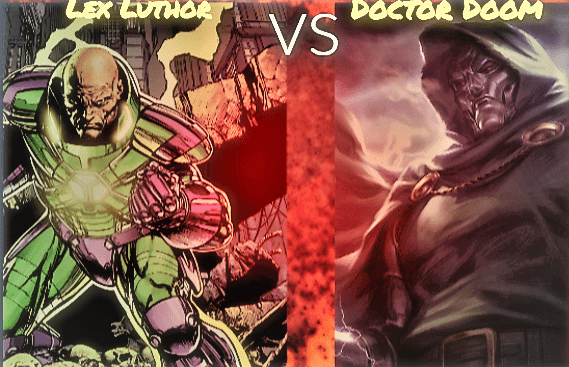 THE SMARTEST HUMANS AT DC AND MARVEL

In January, we ranked the formidabilities in a potential Darkseid vs Thanos battle. And we looked at the characters in continuity at their highest powers: Thanos with the Infinity Gauntlet and Darkseid with the Anti-Life Equation.

At DC and Marvel, Lex Luthor and Doctor Doom are definitely the two smartest humans in their respective universes. For his part, Lex Luthor has planned world domination while Doctor Doom has conquered the power of God on multiple occasions.

To this end, we have come up with a villainy score that compares both characters in eight categories: Sales, Origin Story, Character Evolution, Cast, Quality Opponents, Villainy, Power, Popularity. Before we compare our villains let’s list some rules.

So, let’s compare Lex Luthor and Doctor Doom in the villainy department.

For sales, Lex Luthor outperforms Doctor Doom. In the comic medium, it appears the Metropolis businessman lags behind the Baron of Iron.

In animation, Superman: The Animated Series and Justice League Unlimited have created the best portrayals of Lex Luthor. And to this day, Michael Rosenbaum remains the most celebrated version of Lex Luthor with Smallville. And the Total Estimated Domestic Video Sales for the series is $151,375,254.

Though Doctor Doom stars in more event comics with prominent roles, he performs less than his counterpart in the different media.

In 1984, Marvel Super Heroes Secret Wars ranked as Marvel’s first company-wide crossover event and the top-selling comic year-long with 250000 copies sold. In 2015, Doctor Doom becomes God-doom in Secret Wars whose first issue ranked 1st in unit sales with 527618 sold on the Top Comics of May 2015.

With animation, the Spider-Man: The Animated Series and The Avengers: Earth’s Mightiest Heroes have created the best portrayals of Doom. However, very few portrayals have had the lasting impact that his counterpart has had.

In the movie department, the controversial live-action adaptation of Doctor Doom in Fantastic Four: Rise of the Silver Surfer was not successful. Overall, FF earned $289,480,691 internationally.

In many respects, Lex Luthor is definitely one of the most interesting character at DC Comics.

Post-Crisis, his motivations have centered on either destroying Superman’s reputation or besting him through his lackeys. What makes Lex Luthor work is that he genuinely believes himself to be humanity’s savior by virtue of his superior intelligence.

During Dark Nights: Death Metal, Lex may have finally become good. In fact, he proved why he is the smartest human in the DC multiverse by creating the weapon in the World Forge that created Truth Incarnate Wonder Woman.

In addition, Doctor Doom has shown he is Marvel’s Greatest Villain. Really, during the first Secret Wars, he stole Beyonder’s power becoming the Supreme Being of the Universe.

Similarly, Doom believes himself to be humanity’s savior. In Doomwar, he has beheld a potential future where he is Earth’s ruler.

However, like other Marvel villains, Doctor Doom ultimately knows he is not fit for ultimate power. Hence, his flaw proves his undoing in the end.

A FAN OF DC COMICS OR MARVEL COMICS? CLICK ON The DC Comics Encyclopedia: The Definitive Guide to the Characters of the DC Universe AND Ultimate Marvel Encyclopedia Vol. 1 by Mark D. Beazley, Jeff Youngquist Matt Brady (2003-05-03) BELOW TO BUY THE hARDCOVER COMICS ON AMAZON.

Really, this is where Lex Luthor truly separates himself.

Indeed, as a businessman and the smartest man on DC Earth, Lex Luthor has proven a better leader. In fact, he showed how an A-list supervillain can legally become the President of the United States.

From Lexcorp, to the Injustice Gang, to the United States, even Darkseid and Perpetua, Lex Luthor is an expert at making deals.

During Our Worlds At War, he won even Superman to his cause in order to stop Imperiex.

Tragically, Doctor Doom has remained a conflicted figure. As a conqueror and world leader, he leads the sovereign nation of Latveria.

Incredibly, Doom commands a religious following and his people actually love him.

In addition, he has sought companionship often in treacherous ways though he has remained single-minded. Effortlessly, Doom could conquer the world, however, it would take manipulation and deception.

During Avengers: Emperor Doom, Doctor Doom realizes that world conquest is an illusion.

For the most part, Luthor is at a disadvantage. Indeed, most of his opponents are Cosmic Beings.

For the most part, Doctor Doom more or less ties Lex Luthor in this department.

Secret Wars showed that Doom’s Quality Opponents are properly Gods or Abstracts. In fact, Beyonder may be the God of the Marvel multiverse.

In this department, Lex Luthor may have foreshadowed the greatest evil. However, his humanity shows he can be redeemed.

With the Worlogog, Lex Luthor created an alternate future where Darkseid imposed the Anti-Life Equation on DC Earth. In a sense, this may have contributed to Final Crisis.

In Dark Nights Metal, Luthor joined forces with Perpetua who re-made the multiverse in her image. However, he redeemed himself by supplying the weapon for Truth Incarnate Wonder Woman’s victory.

In this department, Doctor Doom is pure evil. In fact, he cannot be redeemed. Indeed, his faith in magic is only a masquerade for his lust for power.

In Doomwar, Doom used the purple Man to possess the will of all humans on Earth. On mutiple occasions, his lust for power caused him to steal the power of the Silver Surfer, the Watcher and Galactus.

With his Universal-Level Strength Class, Lex Luthor with the Omega Effect in Darkseid War has a score of 71.5. Though his lack of Teamwork with the JLA limits his potential. His Formidability rating is Metahuman.

To note, Lex Luthor with the Omega Effect is less powerful than Darkseid with the ALE. Which explains how he could not defeat Anti-Monitor. In fact, it takes the ALE to stand a chance though AM is at least as powerful as Darkseid with ALE.

Though God-Doom in Secret Wars is Nigh-omnipotent in Strength Class, his Hubris and Power Dependency on Molecule Man, give him a score of 71. His Formidability rating is Metahuman.

To note, God-Doom is about as formidable as Thanos with the IG. Which explains how Black Panther was able to go toe to toe with him in Secret Wars (2016) #9. Though Doctor Doom was likely toying with him.

NOT A MEMBER? VIEW BATMAN’S GREATEST FEATS FOR FREE

Batman, ‘Batman vs The Incredible Hulk’ #1

Generally, Lex Luthor is more popular in the comic medium. In the Post-Crisis continuity alone, he boasts 789 Appearances.

In order for Doctor Doom to match his popularity, we must add the Baron of Iron’s 841 Appearances to his 218 Minor Appearances.

And that’s our ranking!

IF YOU LIKED THE DC VS MARVEL, PLEASE RATE THE ARTICLE OR SHARE WITH FRIENDS AND FOLLOWERS.

2 thoughts on “DC vs Marvel: Lex Luthor vs Doctor Doom, Who Is The Better Villain? (Comics, TV and Film)”